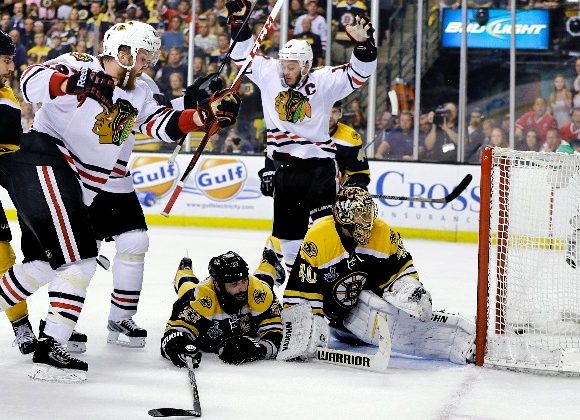 Let’s make it clear up front: There’s nothing you should look to St. Louis for other than to make sure it’s in your rearview mirror. You can’t learn anything from sludge and drool, obviously. While I was one of many wishing the Hawks had shown the Blues’ urgency last summer, that doesn’t mean what the Blues are doing is necessarily a stable model. A hot four months with a goalie from nowhere doesn’t exactly project to sustained success and contending for baubles in the years to come. Especially with a blue line that’s getting older and couldn’t move in the first place. So it’s pieces like this from friend of the program Scott Powers that make be urpy. That doesn’t mean there aren’t things in there that are true, but the Hawks could learn a lot more from the Bruins, and that’s because they come from a much similar place. In fact, they almost come from the same one.

And looking back and now, you could argue the same amount and quality of personnel threads each team from that time to today. Bergeron, Marchand, Chara, Rask don’t really look all  that different than Toews, Kane, Keith, and Crawford. There are margins, but the total wouldn’t be too much different. Add in Pastrnak for Boston, but we could add in DeBrincat for the Hawks and we’re still kind of the same.

So how did each get here exactly?

You know the Hawks went onto another conference Final and a Cup after that (agonizingly close to two Cups), but what you might have forgotten is that the Bruins were the Presidents’ Trophy winners in ’13-’14 and there were a good portion of people who thought we were headed for a Final rematch. The Bruins ran into Carey Price in Round 2, and also lost their minds, but that doesn’t detract from the fact they were one of, if not the, best team in the league that year. Between the two seasons the Bruins moved along Tyler Seguin, but for one season at least they had Jarome Iginla scoring 30 goals and Reilly Smith chipping in 20 to shield the idiocy of that trade. Torey Krug joined the blue line, and basically it was the ’13 team after that.

The Bs “collapse,” as it were, started the next season, while the Hawks were adding #3. And it was maybe for reasons you might recognize. Quite simply, Bergeron and Marchand didn’t score, combining for 97 points (a total Marchand passed himself this year and nearly did the previous two seasons). Trades the Bs had made started to not work out in delay, as Loui Eriksson was finished, the goals dried up for Smith. The defensive depth started to erode, as Boychuk was moved along for cap reasons and Seidenberg got old in a hurry. Some kids like Spooner and Pastrnak, in his rookie year, were not up to making up the difference yet. They would miss the playoffs.

And they would do so again the next season. Bergeron and Marchand were better, but not good enough. Dougie Hamilton was traded for literally nothing. Chara began to show his age, and the defensive depth behind him and Krug was simply nothing. There were no forwards beyond the top line. Rask was only ok.

The seeds were planted for what the Bruins are now the next year, when they racked up 95 points and returned to the playoffs, though they lost to that woeful Senators team being dragged by the dick by Erik Karlsson. But Pastrnak exploded onto the scene in his third year. Brandon Carlo made his debut. Charlie McAvoy debuted in the playoffs. That doesn’t mean there weren’t missteps in free agency or offseason, as I point to Backes, Beleskey, and Jimmy Hayes. But the roots were growing.

Over the past two seasons, the Bruins have brought in DeBrusk, Grzelcyk, and others that they turned into Coyle or Johansson or whoever else.

Now which looks more similar to the Hawks? The Bruins or Blues? Pretty obvious, no? The Bruins had an entrenched core that underperformed in some years (and if you don’t think Bergeron heard some of the same things that Toews did during his down years here then you’ve clearly never been to or read anything written out of Boston), but they held onto and filled in behind. They had a Hall of Fame d-man who could no longer dominate games, but the difference is that he eventually accepted his limited skills and role and let others take the bigger responsibilities. The Hawks haven’t gotten there yet.

And in essence, the Hawks are already in this process, it’s just that they started later than the Bruins did (as they should have) and their stars are going to be older when it’s all done. But the Hawks are loading up on mobile, skilled d-men with the hopes of relieving Keith of his duties in the next two years. All of whom are mobile and able to play with the puck, just as McAvoy, Krug, Carlo, and Grzelcyk can. There is already hope that they have some forwards to take secondary roles behind the main trio, if that trio can hold on for a few more years (also, Toews, Kane, and Top Cat are exactly the same age as Pastrnak, Marchand, and Bergeron combined).

The Bruins were in the wilderness for two to three years, depending on how you categorize that first-round exit. The Hawks definitely have been for two, and possibly three depending on how fluky you think that division winning team that got flattened in the first round was. While they thrashed about in some areas and definitely made their mistakes, eventually the Bruins waited around long enough to fill in behind their legends through their own system. The Hawks are now farther behind than the Bruins were, because they have pretty much nothing on defense at the top level. But they’re also on the same path.