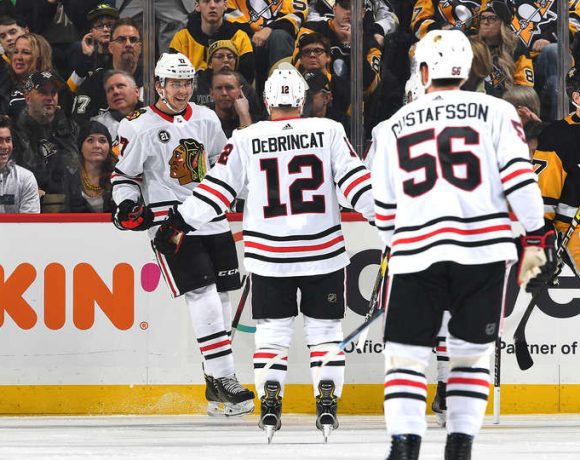 There’s probably nothing that will completely take the sting of today’s Bears game away for diehards, but the Hawks sure did their damnedest anyway. They continue what’s been a surprisingly comical dominance of the Pittsburgh Penguins, winning their 10th straight against them since 2014. And they did it on the backs of Cam Ward and Chris Kunitz. Fucking strap in.

– Every time Colliton starts Cam Ward, I want to lose my ass entirely. I usually do. But in four of his last five, Cam Ward has looked at the very least solid. Tonight was no different. It’d be hard to pin the first two goals on him. The first resulted from Toews losing his man in front while Murphy and Dahlstrom covered theirs. On the second, Keith and Anisimov got caught ogling Bryan Rust in the corner, leaving Guentzel all the space in the world to leak one past Ward off Letang’s point shot. The third goal he probably should have had. But 31 saves on 34 shots against the hottest team in the league—which also had an extended 5-on-3—ought to get you the win, and tonight it did. Ward played well.

– When Chris Kunitz and Duncan Keith both score game-tying goals in the same game, it’s probably wise to check to see which direction the screaming wind that will claim our souls is blowing from. But here we stand, alive and relatively well, following these signs of the apocalypse. Kunitz’s goal came off a slick Dahlstrom stretch pass to Kruger on the far boards. Kruger then backhanded it to a streaking Kunitz, who potted it over Casey “I’m a good guy according to a bunch of stupid jackoffs on Twitter” DeSmith’s dumbass glove. Anyone who gives up a goal to 39-year-old Chris Kunitz is automatically not a good guy. I don’t make the rules (yes, I do).

Keith’s goal was a simple snap shot from the point off a Seabrook pass. It’s been so long since we’ve seen this happen that I was certain they’d wave it off out of principle. While Keith’s goal doesn’t entirely make up for the fact that he had a dogshit game outside of it, it helps. It’s still a nightmare watching him get beat to his spots night in and night out. Tonight though, you’ll take the good with the bad.

– Speaking of good, the power play is good now. Write it down, you heard it here first officially. The Hawks scored much the same way they have been on the power play since Colliton’s actual genius brain put the current PP1 together: Toews roamed in the middle, forcing the PK to turtle into him, giving Gus, Kane, and DeBrincat more room to wreak havoc. Kane’s pass to DeBrincat was art that appreciates over time, and this is just what the PP does now.

– After a slow start, Garbage Dick came to life. First on the power play, then on the game winner, which came after extended pressure from the power play. On both goals, Kane slipped a pass from the far circle, though the slot, to a waiting Hawk. In the second case, Dylan Strome didn’t have to do much but tap it in. This is the pass Garbage Dick almost always looks for, but with the way Colliton is drawing plays up, there’s more room to work with.

– The Penguins have a Top 5 power play in the league. The Hawks killed off all of their attempts, including an extended 5-on-3 that saw Ward make several outstanding saves. The Hawks also had a 51+ CF% overall. You might say the win was a fluke, but none of the underlying numbers really suggest that. The Hawks just straight-up beat the hottest team in the league.

– In the grand scheme, Brandon Davidson probably isn’t an answer to any question you’re asking besides “Who’s that one guy who kind of sucked for the Hawks in 2018–19 who missed 25 games due to knee surgery?” But after tonight, maybe you let Forsling spend some more time in the press box with his “upper torso injury” (MORE LIKE LACK OF HEART, MY FRENTS). He and Brent Seabrook led all Hawks in CF% tonight, with a 53+ and 56+, respectively. Because fuck anything that makes sense.

– There’s no reason Dylan Sikura should be in the AHL while Artem Anisimov gets to do anything other than not play NHL hockey. Fuck the contract and whatever other excuse you want to make for Wide Dick, he unequivocally sucks. He brought up the rear in possession with a putrid 34+. The next closest was Garbage Dick with 40+, but guess who didn’t make two assists on game-changing goals? Just fucking offer him for Darnell Nurse at this point. What’s Chiarelli gonna do, say “No, that’s not a good trade for me” for the first time in his entire life? I know he has an NMC or NTC or whatever, so if you can’t get rid of him, just bench him. Sunk cost.

Folks, this is not a drill: The Blackhawks are only six points out of a playoff spot, because parity is fake, the NHL is a vile urinal, and they’ve played a few more games than everyone else just about. Regardless of where they finish, there’s hope for this team yet, and that’s before you truly incorporate guys like Boqvist, Jokiharju, Mitchell, Beaudin et al.

It may not make the hurt of this year or today’s Bears game go away, but it’s something to build on.

Line of the Night: “The Blackhawks are within striking distance of the playoffs.” – Kathryn Tappen