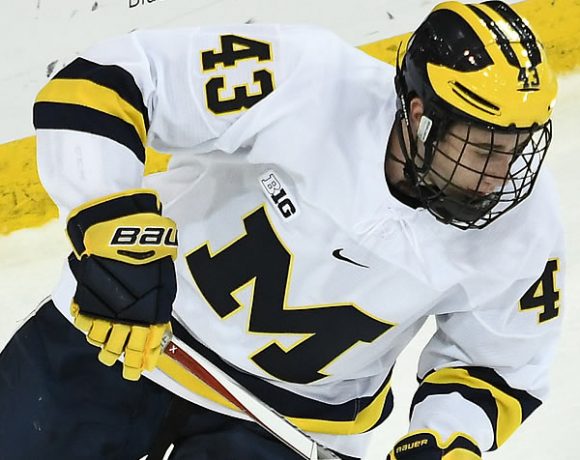 We’ll continue our look at possible Hawks picks with another son of a former player, and one who probably isn’t going to make it to the Hawks at #8 but would be a boon if he did. And that’s Quinton Hughes from Michigan.

Whatever team takes him had better realize that what Hughes does is kind of the future of the position. Not that he’s going to revolutionize the game or anything, but as more and more teams replicate what has made the Penguins successful the past three years, the Knights successful this one, and a handful of others, no longer are teams going to be content with having just one or two mobile d-men and filling out the rest of the blue line with atom-smashers. That’s going to get you beat in this league. The first team that basically throws out five or six puck-movers is probably the next one to have sustained success. Your d-men have to get themselves out of trouble, they have to be good with the puck to dodge aggressive forecheckers, and they have to then get up in the play. As the game speeds up it’s going to be harder and harder to pass your way through trouble. And to do that teams might have to forgive undersized d-men.

Hughes fits the bill. He’s only 5-10, so if teams are going to count on him to clear the crease or wrestle with guys continuously down low, that’s not going to fly. What he is is extremely graceful already for his age, and racking up 29 points in 34 games for the Wolverines in his first year there is nothing to sneeze at. He’s a gifted passer as well, so he can spring breaks from his own end when his feet won’t get him there. He’s basically going to a be a high-end Jared Spurgeon, and if you follow analytics at all you know that Spurgeon is actually one of the more effective d-men in the game and moving the play the right way.

Some teams are going to be scared off by his size, and I fear that the Hawks are one of them. And they can use all the help on the blue line they can get, even if Hughes is a year or two away. What are the sure things for three years from now? Keith will not be? Jokiharju? Ian Mitchell? Gustafsson and Forsling are definite questions still. The pipeline doesn’t have much more, and Hughes would certainly add to that.

Yes, Hughes might have a rough adjustment period figuring out angles and plays to compensate for his size. He’ll probably need to bulk up a bit to at least be a solid frame. But hey, Duncan Keith in reality is no more than 5-10 or 5-11 and figured it out, and you can be hard to play against in the corners with quick and smart hands, which Hughes already has.

While there are some real moronic teams ahead of the Hawks, it’s hard to see the Red Wings at six skipping on him, given his connections to the state through going to Michigan and having lived there now for a couple years. But hey, a boy can dream.