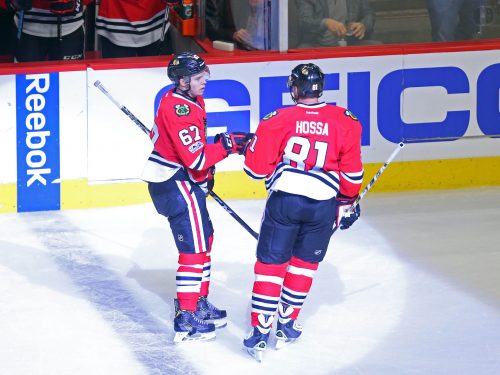 I know that NBCSN wanted to position this game as some important late-season clash, with a lot on the line. We know there wasn’t. And really, tonight was an excellent example of how the Blues have no idea what it is they want to be, and how they want to go being about whatever it is they think they are. The Hawks simply kicked them to shits in the first period. and if it wasn’t for Jay Gallon and Trevor van Riemsdyk, the Hawks could have been up a touchdown. Like we’ve seen a lot of over the past couple years, they spent the second period playing with their food, and gave up a tying goal. And then when they wanted to be serious again, they smothered the Blues and eventually got their deserved winner. This was as elementary as it gets, and just about a pure demonstration of what the Hawks and Blues “rivalry” has been for nine years now when the Hawks have given even the slightest fuck and had a roster even close to matching.