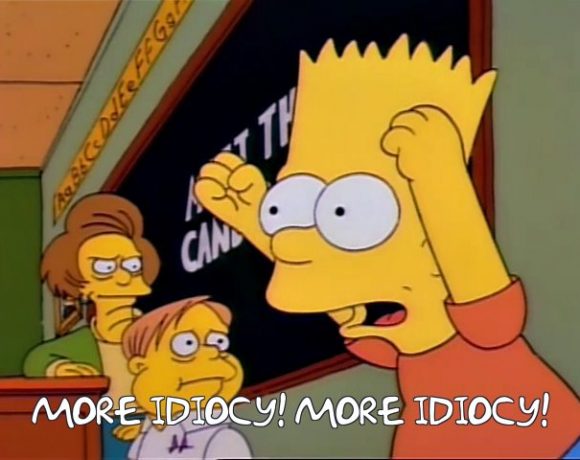 I don’t know how the NHL couldn’t figure out to stagger the start of the playoffs, but then again it never does. Sure, I don’t know what the building conflicts are for each city, though there seem to be only a handful that are housing both NBA and NHL playoffs teams. Toronto, Boston, DC, Philly are the only four. But because of whatever, we had five games to deal with last night and only three the night before. And like the NHL playoffs always seems to do, some wonderful play and high drama is being overshadowed by the height of dumbassery and useless vengeance/dick-measuring that this time of year tends to descend into. And then the Leafs lose. Let’s go around:

It’s never a good sign when someone on your team decides he’s going to out-Brad Marchand Brad Marchand. But step to the front of the line of imbeciles, Nazem Kadri! I know being a shithead has always been a part of Kadri’s game too, but when you’re already down and basically getting thwacked, it just makes you look even more like you emerged from some swamp somewhere and can’t count to four, which Kadri assuredly can’t. And the best part is Kadri had been penalized for a dumbass boarding call just minutes before he decided to reenact Asuka’s hip attack on Tommy Wingels’s head against the boards. That’s good coaching, Mike Babcock! What leadership!

If the league is serious about getting this bullshit out of the game, and it never will attain any sort of status until it does, Kadri should be tossed for the rest of the series. That’s a deliberate attempt to injure an opponent. There can’t be a bigger crime on the ice. Whereas if I squint and could see where Drew Doughty’s hit was simply poor aim or poorly executed but an actual attempt at a “hockey play,” this was simply assault.

Anyway, the Leafs blue line sucks deep pond scum and the Bruins are going to treat it like a lit up runway all series. And then we won’t have to listen to Leafs fans anymore and quite frankly I’m all for it. Oh, the Leafs firepower will probably spasm a win at home, maybe even two, but this won’t be as close as it looks when it ends.

Feels like this game went on in the dark. I still have no idea what the Devils are doing here other than Taylor Hall, and he did his best to drag them to a startling Game 1 win. But the Bolts are simply too much. They get you from so many places. Fast forward us to TB-Boston already. The rest of this is just a charcuterie plate.

Not much was expected of the Caps this time around, so you really have to hand it to them that they stuck to the script of throwing up all over themselves anyway. They even let Thomas Vanek score a playoff goal, which is a real trick. Three third period penalties is a stroke of genius, including Tom “No Seriously He’s A Good Player And Not A Detriment To The Team/Society” Wilson going full Battle Of Troy for a charging call that let Vanek tie the game. Watching Panarin come up with that to win the game didn’t exactly feel good, but then again I don’t remember him doing that at any point in the playoffs with the Hawks either. I still don’t know what the Jackets have outside of him and their top pairing, as Bob wasn’t particularly great last night, but if all you have to do is stand still while the Caps fall over, the Jackets are more than capable of that.

As we kind of said in the preview, Nathan MacKinnon is going to do everything he can to make this a series. But given how limited the rest of the team was before Erik Johnson’s and Semyon Varlamov’s injury, there’s only so much he can do. Because as anyone with two eyes that aren’t Canadian or draped in yellow thought would happen, he ate Doughboy Johansen’s lunch and then spit it back at him. When he was out there against RyJo Sen, MacKinnon had a 74 Corsi % and an 85% scoring chance percentage. Laviolette quickly had to change gears and throw Bonino at MacKinnon, which was much better. But the Preds just have too many weapons for Colorado, which  you saw. And Rinne was excellent. But I have a feeling the Avs are going to at least lay down a blue print that Mark Scheifele will be very interested in. Oh, and Johansen should be suspended too for his charge, the only thing he did all night, but won’t be because the Preds have become the NHL’s little precious.

There was a time when you’d take real joy in this. But now the Ducks aren’t even interesting. I’m not sure I knew they pipped the Sharks for home ice because A) it won’t matter and B) most of the time I’ve forgotten they exist. They sure played like it last night, getting skulled in the 2nd period when all the scoring happened, leaving the Sharks to do the beach chair act in the 3rd. Oh look, Ryan Getzlaf had one shot on goal. Not like him to just meander around the outside in the playoffs or anything. Ryan Johansen must have so many Getzlaf posters on his wall. The Sharks probably don’t even need Joe Thornton for this one.