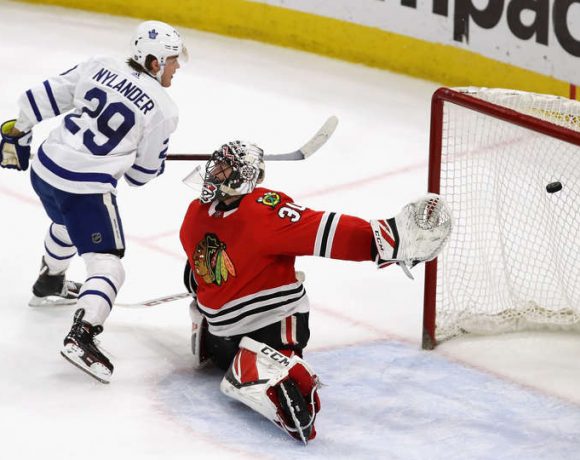 Do you remember wanting to do a fatality in Mortal Kombat II on Sega Genesis, but the combo was 15 buttons long and you were fucking 10 so you couldn’t finish it on time? That’s what this game was. To the bullets.

– Brent Seabrook had an eventful game. Like a post-binge-drinking shit, it started off nice, then turned into a wet pile of unidentifiable slop. The PP goal was a thing of beauty, the half-assery on the missed icing call can be forgiven, but after that, I sat wondering where all that $7 million leadership we keep hearing is so integral to the Hawks’s success was. I wanted so badly to write about what a great game he had—because early on it was good and I want him to turn it around so bad—but in a microcosm of his year, he managed to back down from a strong start and settle into a disappointing finish.

I’m not here to blame the outcome on Seabrook, but it’s hard to argue against the idea that the air came out of the team after the Leafs’s first goal. If the organ-I-zation is going to justify suiting up Seabrook by pointing to his leadership, that botched call is a perfect spot for him to showcase it. Instead we get a whole lot of yelling at the linesman and a report from whoever’s filling in for Pierre that there’s no talking, no urgency on the bench for the Hawks at all. I don’t want to get too sucked in to things that we can’t quantify, so I’ll borrow a line from Q and say I want MORE from Seabs there.

– The first PP goal was a case study in why setting up behind the net is typically a good idea. Credit Wide Dick for swallowing the faceoff impasse, and Schmaltz and Vinnie for having the wherewithal to move the puck behind the net. Vinnie’s awareness on Seabrook’s positioning gave Seabrook all the time in the world to do one of the things he’s always been good at, and he buried the shot off a deflection.

– Speaking of Vinnie, we may have a new candidate for the Kris Versteeg position. You can credit him for the Hawks’s second PP goal, when after what seemed like a decade, he fulfilled every 300-level meatball’s dream (I include myself in this description) and simply shot the puck at the net. One bounce, one Anisimov sweep through the crease, and one inability for the NHL to make the rules regarding goaltender interference clear to even the referees let alone the fans later, Schmaltz had tied the game. The way this team has played, you would have felt safe betting that Vinnie would try to throw the puck to an empty spot on the ice, but he didn’t. On top of that, he exploded from that point onward, setting himself and Keith up for few nice opportunities that they just couldn’t finish. Same as it ever was. Same as it ever was.

– DeBrincat–Toews–Duclair did everything but score, which at this point isn’t just a cute saying. It’s becoming increasingly obvious that when given linemates who aren’t medically required to masturbate with down-lined gloves, Alex DeBrincat is quite the playmaker. He and Duclair had several anus-clenching instances in the first and second periods where the pass was either just a fraction too slow, the angle was a bit too sharp, or Andersen simply had a play to make. If Toews can be bothered to set his internal clock to the same time as everyone else instead of assuming he has more time than he does, I can see this line destroying the Earth, which means Sharp and Bouma will be with Toews tomorrow.

– I want to say I’m getting itchy about Saad, but it might just be angst at this point. The underlying numbers are strong and he’s still a force in transition. But he’s on pace for a mere 40 points this year, which would be the lowest he’s had since his 27 during the Season In A Can. I like the idea of him with Schmaltz and Kane, but after the first period, that line seemed to fade into the background a bit. This is less a call for change and more a vain cry of desperation for the Man Child to pull a Hossa and carry the team.

– Through the first 14:44 of the game, the Sharp–Anisimov–HEART MAN line had a 0 CF%. They bumped it up to 30–20–30 by the end of the period and ended the game with a 50–40–50, but that doesn’t really answer what this line does. This isn’t a complaint so much as a resignation that the depth just might not be there for the classic 3-and-1 setup the Hawks like to run.

– The Jurco–Kampf–Vinnie line is the Hawks’s Autobahn, in that they go really fast just because and put punctures in your furniture from the grip you have to hold when they’re out there. Kampf also saw extended time on the PK and didn’t look horrible doing it. If I were a gambling man, I’d bet on Kampf being Quenneville’s Kruger going forward.

– Glass Jeff was fine for a guy who’s spent most of his career flying through nine time zones to play hockey. You get what you get with him, and there’s really no excuse for losing games against the Ning and the Leafs when he allows just two goals apiece. It’s hard to get mad at him for the shootout diaper crapping, because without a top-tier goaltender, shootouts are a crapshoot.

– I’d like to dedicate an entire bullet to what a gigantic, braying, shitting horse’s ass Mike Milbury is. I don’t know who finds his “back in my day” drunk-uncle schtick charming, but this dinosaur-riding assnose is the pinnacle of insufferable. Anyone who enjoys or even tolerates his continued employment as anything other than “guy who gets stuck in a porta potty while people who are somehow lesser-rank assholes tip it over” ought to be drawn and quartered. He couldn’t wait five minutes, and I mean that literally, before implying that the Hawks lost the Hjalmarsson–Murphy trade. The fact that this rockhead has the mental faculties to imply anything at all would be impressive if the thing he were implying weren’t categorically false. What an outrageous and unabashed dickhead.

It’s hard to get mad about games like this because this is kind of what the Hawks are this year. They managed a point when they needed two, but some of the younger guys—Schmaltz, Duclair, Top Cat, Kampf, and Vinnie Smalls—looked more or less good doing it. This season may not be what we wanted, but there are still bullets in the chamber. Whether they fire them this year or next is anyone’s guess.

Line of the Night: Mike Milbury implying the Hawks would be better with Hjalmarsson than Murphy. I’m not dignifying his actual words by going back and listening to them again. Fuck him.