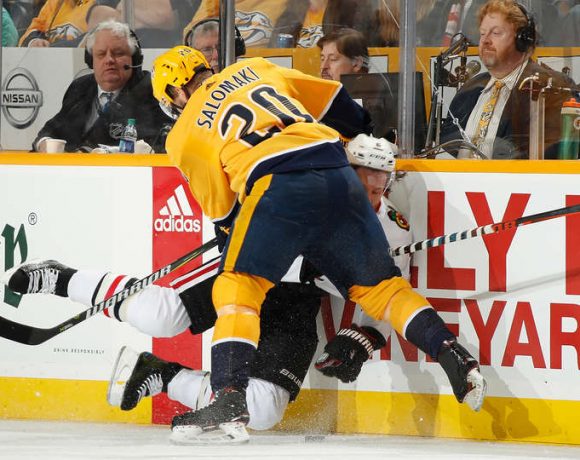 Through the first four minutes, this game had all the feel of a sudden onset of diarrhea after your morning shower, punctuated by slipping off the toilet seat because you didn’t have time to dry your ass off. While things got marginally better and there were some bright spots, the song remains the same: a flaccid start and a broken heart at the end of it all. Let’s clean it up.

– We don’t condone fighting usually. We get red and nude when anyone in the broadcast booth starts alluding to physicality and barbaric dickery (more on that later). But it’s not hard to understand Duncan Keith completely losing his goddamn mind and assaulting Miikka “I let a cat walking across the keyboard name me” Salomaki early in the first. It was a blindside hit along the boards. I’m sure people will try to argue that the hit came from the side and THIS IS HOCKEY and all that happy horse shit. Those people are wrong, and the Venn diagram of people who defend that hit and who own more than zero piss-yellow Mike Ribeiro sweaters is the same fucking circle.

Along the boards at an angle that Linda Blair would have had a hard time twisting to see, let alone Keith playing the puck, is inexcusable. I’m not going to defend Keith trying to piledrive Salomaki and getting the match penalty for it, but I sure understand it. There aren’t many good tit-for-tat arguments, but if you wanted to make one for Keith after the no call, I’m open to it.

– Gustav Forsling is still only 22, and he missed a good portion of last year to injury. But with each game, it gets harder and harder to figure out how he fits in among a D-corps that you couldn’t trade for a cup of coffee along with the two dollars in your pocket. When he’s not getting overpowered (by Ryan Johansen on Goal 1 and Kevin Fiala on Goal 3), he’s freezing up in his own zone (Craig Smith, Goal 4). His vision is questionable at best, and are we really sure he has the skill to be the breakout D-man we thought he was? At this point, you let him shit his pants, dive in, and swim, but you wonder if the clock is starting to tick on whether he’s a guy they keep long term.

– A quick word on Erik Gustafsson: You might be able to capitalize on whatever offensive potential he has when Connor Murphy gets back. Maybe. But he’s just as bad as Forsling in his own zone, if not worse. You’d excuse that if he’s a point per game D-man, but he’s playing more like an eleven-year-old with a mustache who thinks running head first into a wall is a good way to impress girls.

– There were some positives here. Brandon Manning was by far the best D-man the Hawks had out there tonight. All of his metrics flesh it out: He had a 55+ straight CF%, a 51+ CF% SVA (score and venue adjusted), and contributed offensively. His assist on Artem Anisimov’s goal was flat-out gorgeous, splitting traffic in the slot and allowing Wide Dick to just be there. He also hit the crossbar off a Henri Jokiharju rebound in the second. You hope that this kind of play continues from Manning, because he’s exactly the kind of guy you can trade for a young flyer or mid-round draft pick later down the line.

– Brent Seabrook flashed some of the old style of play too. Outside of his terrible turnover that led to the Preds’s second goal, he was, for lack of a better word, crafty with the puck. He nearly set up David Kampf with a semi-breakaway off an area pass, and managed to juke Roman Josi out of his skates with a fake shot in the third, which led to a quality chance for Dylan Strome off a Forsling point shot rebound.

– Brandon Saad—who has more goals than Artemi Panarin on the year, thanks—did that voodoo that he do so well again. When Saad gets a full of head of steam along the boards, there aren’t many people who can stop him. And he managed to overpower both Ryan Ellis and Pekka Rinne on his goal, swatting his own attempt out of mid-air. Anyone who doesn’t want to admit that Brandon Saad fucks is a jerk.

– I don’t want to see Alex DeBrincat fighting. In the moment, it’s fun, but let’s not make that a thing in the future.

– We rag on the broadcast for falling back into the MORE PHYSICAL trope all the time. And while Eddie was guilty of it a few times tonight, nothing was quite as weird as Steve Konroyd after the first intermission. I get being mad about the Keith hit, but Konroyd went so far as to say that a guy like John Hayden should “go after one of Nashville’s smaller guys” to “help bring them [the Hawks] together.” Motherfucker even acknowledged that “that may not be right” and called his own idea “kinda barbaric,” then proceeded to justify it as something to bring the team together. It may not seem like anything more than Konroyd tossing meat to the worst kinds of hockey fans, but this kind of mind-set contributes to guys like Tom Wilson constantly having the chance at gainful employment in the NHL. It’s fucking gross to imply that someone should put a horseshit hit on an opponent as a team-building exercise. Stuff your mouth with my dog’s fart blanket with that suggestion, Stevie K.

The Hawks get a heaping helping of mulligan stew with a tilt against Calgary tomorrow. If they play anything like they did in the second period tonight, it’ll be fun. But at this point, any wins the Hawks get should be considered gravy, because even if the brain geniouses in the front office won’t admit it, this team is in rebuild mode.

Line of the Night: “The Mute Lounge was conceived for nights just like this one.” –Matt McClure