Drew Doughty – It won’t be long now before this turns into the worst contract in the league. Doughty is already on the decline and no longer carries the play the way he used to, nor does he really much care to, and he’ll make $11M until the planet collapses in on itself. For some reason, the Canadian media is desperate to turn his “rivalry” with whatever garbage Tkachuk boy it is up in Calgary into Hagler-Hearns. But these are two players the hockey world has already declared they don’t care much about on two teams they definitely don’t care about, as one is just an entitled rich kid who’ll manage the same empty trophy case his pappy did and the other is a rapist. Doughty might even get to Seabrook-sized soon. At least you’ll have someone to laugh at.

Kyle Clifford – Perhaps no better example of how the Kings learned all the wrong lessons from their last Cup. Clifford has always been a fourth-liner who should have been discarded for a younger model years ago. But because the Kings still believe their stinky breath was the reason they won, he’s been given something of a cult hero status even though he’s slow and his hands are made of gravel. He’s if Andrew Shaw was carrying around a 50 lb weight belt and had his hands cut off.

Ilya Kovalchuk – Man he’s good at cashing a check, though. 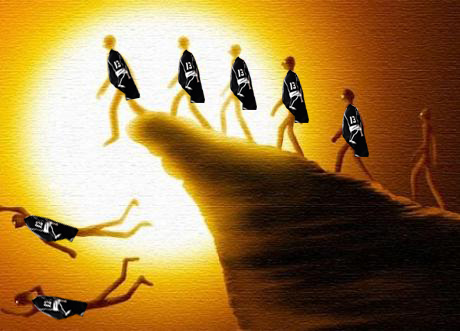 Game #20 – Kings vs. Hawks Douchebag Du Jour: The Road To Hell Is Paved With Kyle Clifford

Fanbases can get attracted to fourth-line players, especially ones that stick around for a while. You see it all the time. Even though deep down, everyone knows they could be replaced by any number of halfwits from the AHL, because no one paid attention long enough to see that this particular grunt hadn’t left, he becomes celebrated.

What can’t happen is that scenario in front offices. Just because someone screwed up and forgot to tell this particular punter that he was moving on, doesn’t mean he becomes a team staple.

Kyle Clifford is going into his 9th season with the Kings. He’s scored 45 goals over that time. He’s amassed 96 points. His metrics have always sucked, consistently lagging behind the team rate. He’s big, and he’s slow, and he’s dumb. He’s the kind of player you’d want to see washed out of your team years ago. And yet here he is.

There isn’t a better symbol of how the Kings have valued the wrong things the past three or four years that they sought not to populate their bottom six with more speed. Or there’s no bigger indictment of their development system that no kids has been able to render him redundant and pick up the pace. And so Clifford remains.

Clifford isn’t the reason the Kings suck. No team is ever brought down by one bottom-six forward. But it’s a spot the Kings could have improved upon, and didn’t feel they needed to. Because Clifford can fart loudly in the corner, or something. The Kings have sat back and watched the Sharks, Ducks, Knights, and Flames in their division filter out the dim-witted for at least the dim-witted that could skate and was younger and cheaper. Clifford isn’t terribly expensive at $1.6M per year, but it’s a job you can get done for something with a “K” instead of an “M.”

We’re sure he’s “good in the room.” Or he “is a good teammate.” And all the other buzz-phrases that players and coaches alike come up with to justify a player who doesn’t actually do anything that helps you win.

But this is how the Kings want it.