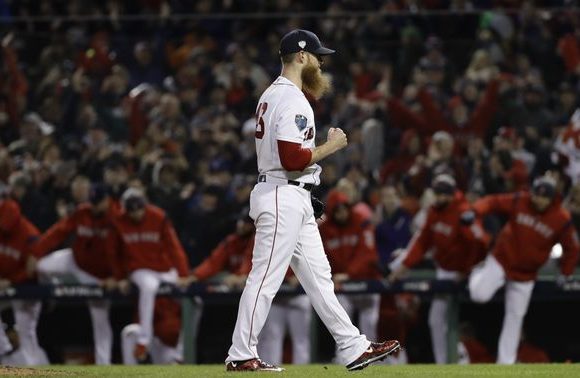 $6 million. It’s a lot of money to you and me, so before someone pulls that arrow out of the quiver let me head that off. But it’s not a lot of money to a Major League baseball team. And that’s what the cost, or savings, was for the Cubs to get over the line and decide their bullpen needed Craig Kimbrel. And the corresponding taxes, which would have been at most another $2 million. For strictly on the field matters, Cubs fans should be excited about the Kimbrel pushing Strop to the 8th. He might not be what he was, but he’s miles better than what was here.

But at the cost of how many wins already? They might not matter in the end. The Cubs are in first now, they very well may be by the time Kimbrel makes it to Clark St., and if you win the division you win the division and it doesn’t really matter if you do it with 96 wins or 100 (though can’t help but notice the last three WS champs had 100+ wins and the last six WS participants were 97+). Perhaps that’s the bet the Cubs are making.

It’s not just the Cubs, of course. Every team could have used Kimbrel. Every team should have been trying to get him in the winter, when this is supposed to be done. They can throw whatever reason they want at you with their bullshit, but it was all about squeezing another dollar of profit and not about making their teams better in some stealthy way. It was so blatant and callous, it’s impossible to ignore.

Am I supposed to believe that $6M+ a draft pick that very well may be a nothing one day was so important that it had to wait this long? And how are Cubs fans supposed to feel good that it took a personal disaster for Ben Zobrist for the Ricketts to decide that money was open now? That’s no one’s fault really, it’s not like they planned it, but yet you can’t help but notice the sheer coldness of it.

I can’t sit here and honestly believe that the Cubs front office thought this bullpen was acceptable to go into a season with. They’re not stupid. That would have been criminal incompetence, the kind you only see on Madison St. (take your pick of which resident there). They knew this pen would need augmenting. They knew it in January. So why are we waiting until July?

The strangest thing is the quiet, outright silence, about it from Theo. I don’t expect him to go firing on his boss in the press, but something is amiss. Maybe he was told it was a one-year thing, and maybe that’s why they’re leaking Marquee opening up the cash flow next winter already. But I can’t believe Theo would be delighted to work under a complete factitious budget that is only in the Ricketts’s head. They’re worth $2.2 billion, I feel like that has to be mentioned every time.

Maybe my eyes are lasered on the Ricketts’s these days because they’ve been so distasteful, and the Kimbrel signing comes on the same day it was out there that a RNC donor event will be held at Wrigley (the proximity to Boystown should make for interesting viewing). What’s pretty clear, and should have been for a while, is that the Ricketts kids are just a bunch of vapid assholes convinced of their superiority by their born on third nature. Hardly their story alone.

And yet they end up with the closer they needed long ago, and very well in time to get the Cubs to the playoffs. And I’ll still cheer when Kimbrel starts firing fastballs by people, because I’ll be damned if I’m going to let a vapid asshole like Tom Ricketts rob me of something I’ve loved since I could walk. Maybe that’s what I tell myself as a rationalization, along with, “There is no such thing as ethical capitalism.”

I can’t believe the Cubs were incompetent this winter, because that’s just not what they were. So they were lying. It’s clear now, though it was then. It’s hard to feel good about that.