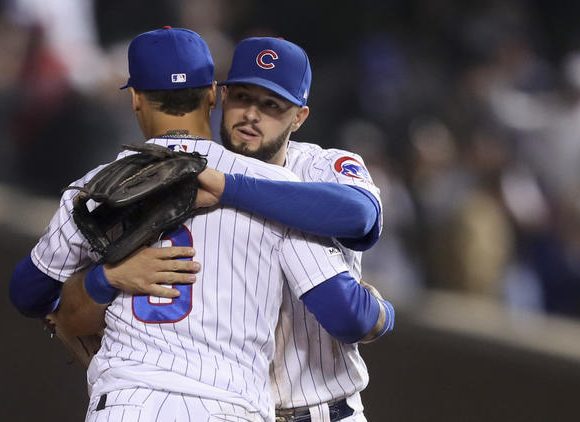 Series Wrap – Cubs Take Two Of Three From Rockies: The Answers Aren’t Here And Not Here

It was a series somewhat overshadowed by the Cubs making a signing during Game 2, which is usually only reserved for trades. Such is the way of the game these days. Anyway, the Cubs got two of three, three of four on the homestand so far, which is a nice recovery from what had gone on the past two weeks. Win the series against Mos Eisley, and you’ll have a 5-2 homestand which is just what the doctor ordered. At least the offense is back…until it wasn’t. The rotation definitely is though.

-Tuesday night featured another Kyle Hendricks gem, and he was really accentuating the upper part of the zone. Have a look: 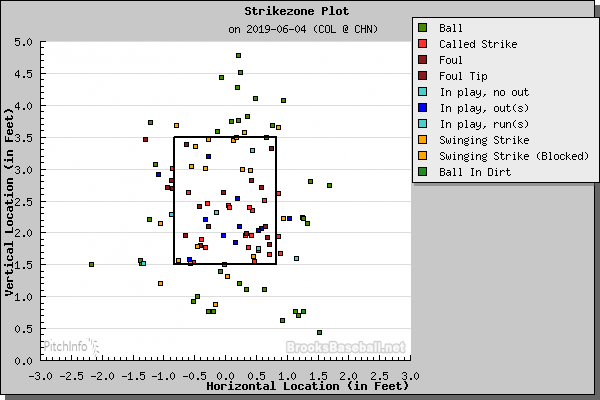 Hendricks’s new wrinkles this year is to go up the ladder and to throw more curves, 16 of which he chucked on Tuesday night, a season-high. When you have as free-swinging an outfit as the Rockies are, you get a pretty easy night at the office.

-You can tell Maddon is jumpy about his pen, as Hendricks was allowed to throw 111 pitches and then Quintana today went one batter into the eighth.

-You can’t blame Maddon after last night’s tour-de-stupid. Brad Brach is a nothing, and it’s time the Cubs realized that. So is Kyle Ryan. I keep stressing that Montgomery and Chatwood, who are stretched out, should be thrown multiple innings whenever possible to limit everyone else’s exposure. Perhaps the biggest disappointment with Maddon’s management, on the field that is, is his lack of imagination with his pen usage. He wants his closer, his 8th inning guy, and his 7th inning guy. He seems tempted to use Chatwood that way at times, but not consistently, and Montgomery as a one-inning guy just doesn’t make any sense.

-The Cubs might have gotten a couple lightning strikes out of Carlos Gonzalez, but don’t fool yourself. He’s finished. He’s only had one season where he was anything but an average hitter away from Coors, and that was four seasons ago. Albert Almora seemed to have secured regular playing time, and then it vanished for this. Which just isn’t fair, unless you’re going to sit Heyward, and sitting Heyward for Gonzalez is the definition of running in place. The only benefit is the hands team the Cubs can put in the outfield late in games now.

-However, he was at the turning point of last night’s game, when German Marquez decided to pitch around CarGo and then hit Contreras, before Bote cleared the bases. I don’t know if it was from memory or a favor to an old friend, but it defied explanation. Even despite the Cubs’ pen’s best efforts, they couldn’t seal a game that had already been blown open.

-Next time, maybe just let Yu try and work himself out of his own trouble instead of protecting his psyche, because letting the pen come in and start various bonfires isn’t going to help it either.

-It does feel like the Cubs always huff paint when facing a pitcher making his major league debut, but I’m sure if I looked, or knew where to look, the numbers wouldn’t bare that out. It’s still annoying as fuck, though.