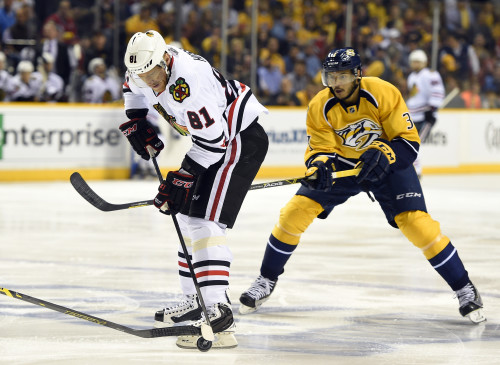 Easy enough to know where we’ll start. Your feelings on Johansen-Jones? We know the Preds have never had a #1 center and Johansen is very good, but Jones looked to be a future Norris winner and it seems at least a little steep.

JR: Obviously Seth Jones is already amazing and is going to be amazing for years to come. What this trade tells us is A) David Poile is comfortable with Ellis and Ekholm long-term and B) Shea Weber isn’t for sale. The trade upset me for a lot of non-hockey reasons – Seth was great with kids, good in the community, really committed to growing the game and really easy to deal with – but from a hockey standpoint, the Preds obviously felt like Jones was going to get in a traffic jam and the franchise has needed a center for 18 years now. With Johansen at 23, under contract for a couple of years and headed into another RFA period, it’s a good deal to make.

Martel: Plenty of folks weren’t bothered at all that Nashville gave up Jones for Johansen, however I may be one of the few that felt as if the price was steep, but necessary, for a player of Johansen’s caliber. Johansen has already shown Nashville what he’s capable of and how dynamic of a center he is, but was it worth giving up Jones? Right now, it’s impossible to tell. Jones had a definitive ceiling with Nashville in the name of Shea Weber — as long as he was around, Jones would never see his true potential realized with the Predators. Now with Columbus, he’ll be able to play those top minutes. Ultimately, I think Nashville wins the trade now, but it could even out as time goes on.