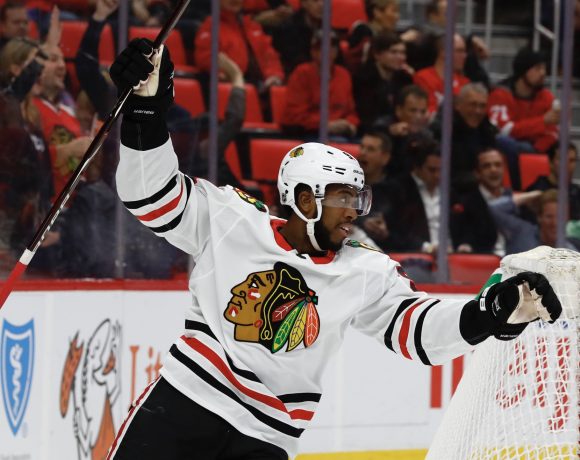 Game #49 – They took the train going anywhere because your city is trash – Blackhawks 5, Red Wings 1

After three weeks of the Hawks essentially either getting their dicks kicked in or playing well enough to win but finding a way to lose, tonight was a welcome outburst of good hockey. Especially after Detroit was one of the teams that did the dick-kicking-in just last Sunday. This is what the Wings get for putting their shitty team in a shitty town and naming their arena after shitty pizza. TO DA BULLETS MY FRENT

– Give me more DeBrincat-Toews-Duclair. Give me all of it. The three of them went 56.25-62.16-58.82 on CF, respectively, and each found the score sheet (finally, in Captain Woke’s case). DeBrincat recorded a Cat Trick (yeah I said it, fuck off) and an assist, Duclair found the net after an absolutely orgasmic passing play from Keith and Top Cat to go with 2 assists, and Toews notched a helper on a nice rush that led to Top Cat’s second goal. As John said yesterday, as long as Toews can figure out he doesn’t have as much time as he wants to think he does to make plays, this line has chemistry, and the speed and skill of the two wingers will hopefully help Toews find more production.

– More on the Duclair goal. Please go watch it here. Granted, it is off a faceoff, which helps a little bit in catching the Wings on their heels. But can you imagine if the Hawks moved the puck with that sort of urgency on a power play instead of everybody standing around with their dick in the hands every time. If I’m Q, I’m sitting the whole team down in front of the video screen when they get back from break and just saying “DO THIS ON THE POWER PLAY.” Maybe they could score a damn PPG against a team not from Canada.

– The third line of Wingels, Anisimov, and Heart Man was one of the few low spots for the Hawks in this game. And they were a very low spot. All three of them got absolutely skull fucked on shot shares, with Heart Man and Anisimov both posting 33.33 rates and Wingels below that at 32%. Those were -22.83 and -24.94 compared to the team rate for the game, which is just pathetic. Even adjusting for score and venue, Natural Stat Trick has all three around 40%. To echo John from last night’s wrap again, this is further evidence that the Hawks aren’t gonna be able to roll a 3+1. And if maybe for some reason this third line was intended as the 1 and rather than part of the 3, that might actually make this look a lot worse.

– Guess which defenseman led all Hawks blue liners with a 60% CF. Connor Murphy, bitches. It’s becoming evident that Sam’s assertion that Murph is this team’s best defenseman this year is correct, and Q’s diaper filling over Hjammer is just sad. Murphy also tallied the primary assist on Top Cat’s first goal, which got the night started. Fuck you and your press box, Joel.

– Ant Man Forsberg was fine in the net tonight, but he still too scrambly-panicky for me to truly comfortable with him, even as a main backup. I am not sure what options there are out there, but I almost wonder if Stan shouldn’t investigate adding one of the league’s better backups via trade. There’s still enough here for the team to maybe sneak into the playoffs if they get reliable goaltending, and I am not sure you’re getting that from Glass/Forsberg. But it’s also about more than this year. Again, I am not sure Forsberg is really a good backup, and those can prove to be important throughout a regular season. Points won or lost when your backup is in can impact playoff seeding. So a good backup who might have some controlability moving forward, and maybe some potential to take the starter’s mantle in the coming years (Crow is only getting older and that brain can only get more mushy) could be a wise investment.

– For being “HOCKEY TOWN,” Shitty Pizza Arena sure had a lot of very obviously empty seats tonight. Shit, you can see a lot in that photo above. Not that Chicago is one to talk cuz ticket prices are dropping like bricks around here and seats are opening up in the UC like mad, too. But with opening a brand new arena, and this being the only Chicago-Detroit matchup in the Motor City this year, I was a little surprised to see how empty the arena was. Just another fly dropping to the NHL attendance plague. Ho Hum.

– Look, it’s only Detroit. They’re not great. But this kind of effort is one we hadn’t really seen from the Hawks since the ass whooping they gave Ottawa, who is also bad. And this is also the same Detroit team that kicked the Hawks dick in 11 days ago. If it is indicative of what’s to come for this team (and that is a BIG if), there is reason to think this team can find the playoffs. Maybe.