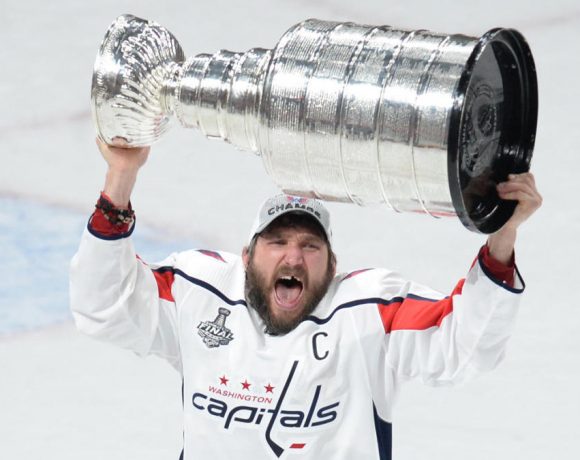 Night Songs – That’s How Ovie Does It

Call me a sucker for these moments.

I’ve certainly had my issues with the Washington Capitals. I’ve definitely reveled in their failures along with everyone else, spiced with a tinge of frustration with them for not making good on the promise of so many teams in the past (don’t tell me Caps-Hawks in ’10 wouldn’t have been a much better series than the Flyers, not that I care now). Tom Wilson’s presence. Timothy Leif, though if Oshie had become a Hawk once upon a time he’d be one of our favorites I’m sure. Bruce Boudreau. Barry Trotz at times. They’ve been far from the most annoying team in the world, and if you’re a hockey fan for just two to three years or so you’ll be annoyed by every team that isn’t yours.

But I don’t know how you didn’t smile watching Alex Ovechkin last night. Sure, it’s not like any professional athlete will “suffer” when they don’t win a championship, given the perks that come along with it. And yet this is what they’ve been trained and drafted and deployed to do their whole lives. It’s been their raison d’etre, and if it’s not they can expect a torrent of horseshit thrown their way (for evidence, check out Pat Boyle calling out Jonathan Toews on his podcast/propaganda).

And especially when it’s Ovie, who’s basically had to eat all the shit for the Caps for 13 years without ever balking. Writers looking for an easy scapegoat, who wouldn’t dare call him a choker or accuse him of not caring if he came from Swift Current. Coaches trying to cover their own incompetence by laying it as his feet. Caps fans will deny it now but there were a fair few calling for him to be traded after whatever playoff failure you want to choose. The constant comparisons to Sidney Crosby.

And Ovie had to swallow all of that Caps-Pens bullshit, even though most of it came well before he was even thought of as a prospect. Ovie’s Caps and Sid’s Pens have only met in the playoffs four times. And one of those was 10 years ago. Does it even count? The Caps-Pens “thing” is basically only slightly more of a “thing” than Hawks-Canucks or Hawks-Wild. Fuck, the Hawks and Predators almost have the same recent playoff history. And yet Ovie and the Caps had to choke it all down because the Pens went on to win a Cup each time after beating them, which doesn’t really have much to do with them, does it?

You see Ovechkin last night, quite simply the greatest scorer the game has ever seen, and what it meant to him. Or those fans who flooded Chinatown and elsewhere last night in DC (wishing Chicago might have found a gathering space for the Hawks once, but oh well. I wouldn’t have been there anyway, because I needed to be punching Killion at the bar). You can’t help but smile. It’s been a good hockey town, whatever you think of it. And you see them do it for the first time, and just maybe you remember what it was like the first time for you. It’s always good to be reminded why you bother with this in the first place.

I saw a lot about how this clearly isn’t the best team and how this is how the NHL works. And maybe it is. At this point, we know the regular season standings don’t tell a complete story. I think you take the teams that have 105 points or more and you basically throw them in a “top group” and they’re all the same. The Caps won a division that produced five playoff teams. They clearly don’t suck.

Matt had it right yesterday, that when you get to this stage, it’s usually the chalk. You may say this team or that team wasn’t the best one, but there hasn’t been a Cup winner in a very long time that came from nowhere. They’re almost always among that “top group.” You can get some weirdos in the Final, and then the team with more future Hall of Famers wins. The Caps have at least two in Ovechkin and Backstrom, and Kuznetsov could be one day if he maintains this level. It’s not that hard.

I wonder where Ovie goes from here. After Sid won his first he had his first 50-goal season the next out, seemingly freed of what had been expected and placed on him since he was a teenager. Does Ovechkin have anther 50 or 60-goal season in him? I wouldn’t ever doubt him.

It’s funny, because most of this playoff run, this Caps team has been somewhat derided as “not a vintage Caps team.” And yet if one of the previous two that were better than this, had just gotten a bounce or two here or there against the Penguins, and won a Cup before this, we’d say this version did it on know-how and confidence, much like the ’15 Hawks. It’s still the same core, they just got a little more luck, a little more goaltending, and there it is. Looking back at our local outfit, Game 7 OT in ’13 could have gone any direction. The Bruins were a post away from going up 3-0. Two multi-OT games against Nashville in ’15 would have swung that series, or Pekka Rinne not drinking a bathtub of cough syrup before every game would have. And then what would the narrative be?

It’s why talk of “windows” is hardly the whole discussion. There isn’t really more the Caps could have done to now be a multi-Cup winner, a save here or there or a deflection here or there. I guess that’s the magic of it all. Teams can only put themselves in position, but after that so much of it is out of their hands. It’s fascinating theater and torturous following.

Good for Ovie. Good for Trotz, who coached his ass off this spring. Holtby too. It’s a good ending. Maybe not the best. But good.