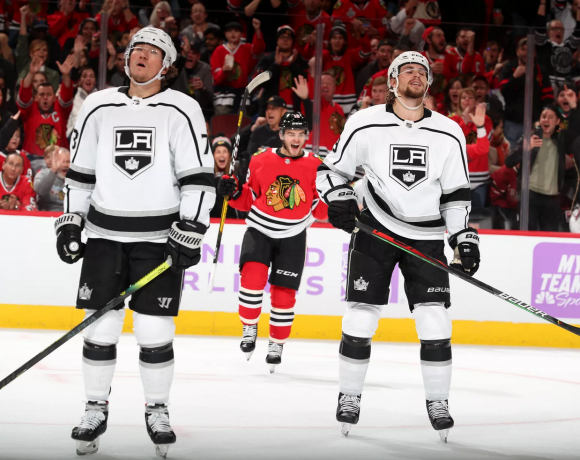 After attending today’s Bears game, I had some minor apprehension about watching the Blackhawks tonight, especially upon the realization I had signed up for this wrap. Could I really handle that kind of emotional turmoil from my sports teams twice in one day? But then, Frenemy of the Program Aaron reminded me this game was against the Kings, so I tuned in. Because if there is one thing I know, it is that the Kings are worse than the Blackhawks, but really that just means that they will have better lottery odds come April (or whenever they do that thing). I was then proven correct. Let’s dig in.

– There was a lot of hubbub on the Twitter Dot Com application when the line combos for tonight first got put out there, in large part because Alex DeBrincat and Dylan Strome were listed on the fourth line. Admittedly, it was a really strange looking lineup when you looked at it in a tweet. You had Daydream Nation together with Drake Caggiula, Kampf and Nylander on the second line, Dach and Saad on the third. It was a bit perplexing. But overall the combinations made a lot of sense, actually. Kane and Toews both need a puck-winner who can create space for them, and Caggiula is that. Same goes for Top Cat and Strome with Carpenter, and them being the fourth line in the warmups and therefore the lineup tweets was mostly just procedural it seems. Dach’s skill was able to shine through on a line where Shaw could make the thumps for him. Kampf created room for Nylander. Basically every line had a puck winner for the skill guys. I was shocked as well.

– Just to go a little further on the last point, the success of Strome and Top Cat together surprised just about no one, and that is truly how it should be. Around these parts, we’ve been banging the table for them to be together (or at least I have) ever since Strome came here last fall. I don’t really see a non-injury reason for them to not play together because they have great chemistry and complimentary skill sets. But I don’t think that Carpenter’s presence on that line and the subsequent huge night from the two kids is mere coincidence. Again, he was able to serve as the puck winner and space creator for those two, which they need since neither is fully capable of doing it on their own. It doesn’t necessarily have to be Carpenter moving forward, but having someone like him or Caggiula with these two will be very wise moving forward.

– *deep sigh* I have to admit – Alex Nylander is certainly growing on me. Thus far I can’t tell if it’s more like a gross fungus or a nice beard, but he certainly growing on me. I…… I like him. I haven’t been able to watch every single Hawks game this year, because I value my sanity, but he has been mostly impressive in just about every game I have watched to this point, and certainly one of the best players in the two games I’ve wrapped. This is unexpected but certainly welcome.

– Duncan Keith has been playing quite well lately. Even as the guy who gives the least fucks possible for the coach, it’s been nice to see him playing well. Someone on the blue line has to while Murphy is out.

– Launch Slater Koekkoek into the fucking sun. He didn’t even doing anything that bad tonight, I’m just done with him. Fucking sick of it. Get rid of it.

– To steal a tweet from @DeBrincat_Haver, even though this game was a lot of fun, in many ways it served as a reminder of how far the Hawks are from what they once were. Even in roundly waxing the asses of the Kings, the Hawks just don’t have the same creativity and puck movement that they once did. It could certainly be coming soon, as the Hawks actually revamp the blue line with guys like Boqvist and Beaudin, but for now I am left waxing poetic about the Hawks of 2010-2016.

– Next up for the Hawks is Nashville on Tuesday, kicking off a 4-game road trip.

Over The River And Into The Muck: Hawks at Devils Preview/Peep Show

SPRINGSTEEN SUCKS: In Lou We Trust

The Hawks will embark on a road game for only the third time this season and the last time this month. They’ll be looking for their first point on the road as well. They’ll have a pretty big chance against yet another non-descript Devils team. In fact, the Devils officially changed their name to “The Non-Descript New Jersey Devils.” You didn’t notice, because no one notices anything the Devils really do.