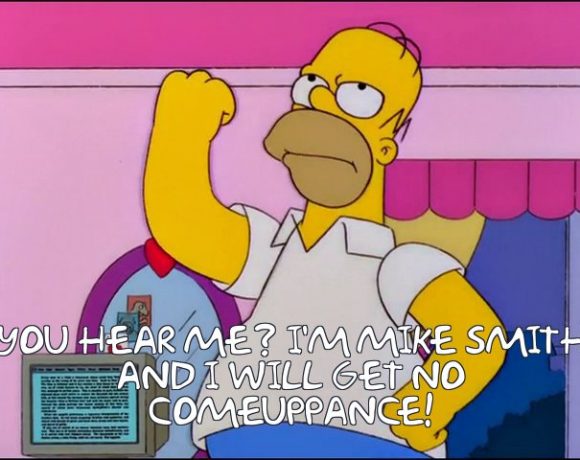 We won’t lie to you (we never do). Watching Mike Smith‘s total and rapid meltdown in Calgary of late has done us good. Everyone has to cling to whatever brings a smile in this current world, and every time Smith points at a defender when another 50-foot wombat confusedly gets past him we believe that there is good in this world.

It’s not even Smith’s fault this year. Well, his terrible play and seeming need to blame it on everyone around him is. But Smith is what he is. He’s 36, he’ll turn 37 during the season, and he’s got a lot of miles on him. He was bad in the second half of last year, when his .888 in February and .880 in March torpedoed whatever playoff hopes the Flames had. No one wins the battle with time, and the Calgary front office should have known what they had in the ginger thespian in net.

It’s Bill Peters who keeps sending him out there, convinced that with the right defensive play, the Flames can somehow get away with having a goalie with hair in his ears. They have a perfectly good substitute in David Rittich, but no, the unwritten rules say you have to stick with the veteran until he actually turns to mulch. And Smith might before the season is out.

So Flames fans can get accustomed to Smith screaming at his d-men that they didn’t block some shot that is more of a question from the blue line. Or breaking his stick on a post after he gives up a third goal in 10 minutes. Or diving to the ice like a suicidal falcon when any forechecker comes within five feet. It should only be a little longer, but one wonders if those points won’t matter come April.

Maybe they worry Smith will be a dressing room distraction if he loses the starting job. He’s done it before, with Arizona only too happy to move him along and welcome the far sunnier Antti Raanta in. Either way, it’s excellent theater for us. And eventually, those ’12 wounds will heal.