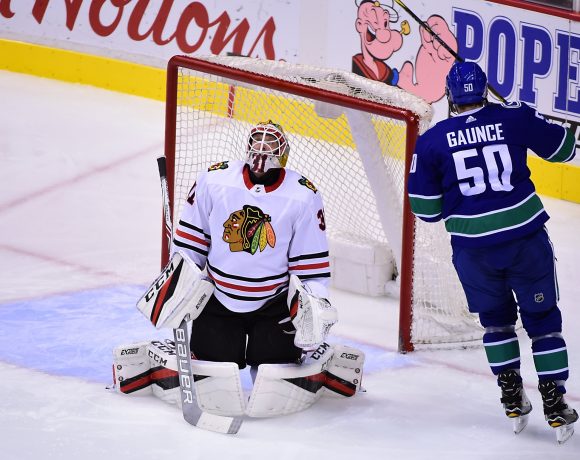 Well Pilgrim, Only After You Eat the Peanuts Out of My…– FFUD’s ’17-’18 Player Reviews: Anton Forsberg, Show Business is a Hideous Bitch Goddess

Way back in August, I wrote the preview on Forsberg and mused that he seemed like a quadruple-A player, and that if he didn’t take things up a notch we’d be wondering why that preview wasn’t about J.F. Berube. First of all, that was the closest thing to an accurate prediction I made all season, and second, we sadly found out that Berube didn’t deserve the preview either. But we’ll get to the rest of the cast of jamokes-in-net later; for now, let’s focus on Forsberg.

I have frequently expressed that Forsberg seems truly unlucky—the unluckiest man in the NHL at times, and in this league that’s saying quite a lot. But the truth is that it wasn’t all bad luck, plain and simple. At some point you have to overcome bad bounces and defensive breakdowns and make some big saves—it’s a goalie league, after all. And at too many points in time Forsberg showed he wasn’t really capable of doing that. That .908 SV% overall? Not going to get it done. His save percentage on the PK? Downright shitty. When you give up three goals on 13 shots to the Coyotes (back in mid-February before they went on a hot streak, which, actually, BEGAN with that game), that says something.

Now, for some of the caveats: the defense. There’s no getting around the fact that a shitty defense puts undue pressure on a goalie, which is why Crawford’s numbers and achievements are all the more impressive. Remember the Rutta-Forsling combo that just never seemed to die? The on-ice save percentage when they were out there was .899, and if you can believe it, we somehow survived 406 minutes of watching that combo this season. And then there was Nachos and his inability to move his churro-laden ass, and there was Jordan Oesterle, and a slower Duncan Keith…you know the story by now. So while Forsberg most certainly deserves responsibility/opprobrium for his numbers, they alone don’t tell the whole story.

Also, coaching and personnel choices have to be considered. If you were kinda nervous at a new job and hoping to overcome jitters, and then after a few mistakes you got replaced with an inexperienced nobody who was practically a generation older than you, where would your confidence be at? Even for stiffs like me with desk jobs, that would be sad. For a young athlete with the opportunity of a lifetime to become the starting goalie for a Cup contender, I imagine it would be devastating. Again, at the end of the day it’s on Forsberg to perform, but Q’s short leash and the mental ramifications can’t be ignored.

Where Do We Go From Here: The answer to this question really lies with Crawford, and as Sam’s review discussed yesterday, that’s all smoke and mirrors right now and probably will remain so for at least a decent chunk of the summer (wtf is that? This hellscape tundra will never end).

If Crow is healthy and comes back to start the season, then Forsberg deserves a chance as the back-up again. He was serviceable, even solid in net at times. His positioning and rebound control was definitely better than Feel-Good Story Jeff Gl-Ass, and at least as good as Berube’s. With some confidence and even a slightly better blue line in front of him, he could probably be perfectly acceptable for 20-ish games.

If Crawford doesn’t come back at the start of the season, then Forsberg may be able to stay as the back-up but shouldn’t be the No. 1 guy. Whoever the Hawks would go after (Bernier? Grubauer?) would also be a factor: would it be a guy who expects to step into the starting role? Or would it be someone more on the cusp, who would have to earn the starter’s spot over Forsberg? Again, Crawford’s expected return time and condition will impact all of those answers, not to mention how the cap figures into all this. The Hawks should have some money to play with, but as we’ll see with the rest of these reviews, they also have a lot of questions to answer.

And if none of it went down that way and Forsberg was traded, that would be OK too. Berube could be the back-up if they landed someone better, and that same scenario works if Crow is back at 100%. It’s disappointing, no doubt about it; I really had hoped this would have been Forsberg’s year, my frent. But in the end, we’re back at quadruple-A. Sometimes I actually don’t like being right. 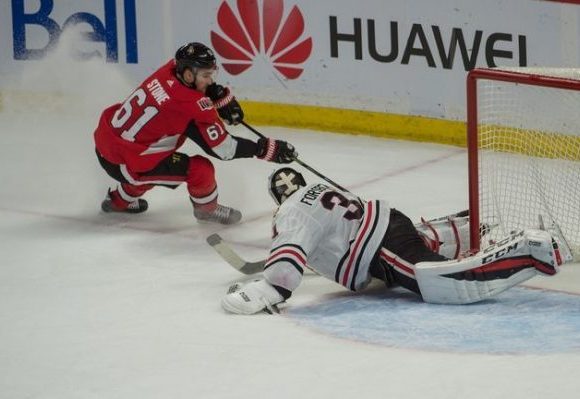 It’s a good thing this game started at 7, because honestly, staying awake through this crapfest was hard enough—had it gone any longer I, and probably most of the people who showed up at the UC, wouldn’t have made it. You would think that a game with back-and-forth scoring that went to a ridiculously drawn-out shootout would be an exciting affair, but you would be wrong. Except for brief flashes of effort, neither team really looked like they half a shit. The level of play was equally lackadaisical and as exciting as one would expect because of that. To the bullets:

–The shootout went on for what felt like 14 rounds, and fortunately Schmaltz’s goal was enough to eke out the win. Anton Forsberg actually had a good game, despite giving up goals right after the Hawks had scored (neither of which were entirely his fault, as usual). He made clutch saves on Marion Gaborik, who inexplicably came to life in the third, and he made just enough stops in the shootout. He finished with a .941 SV% and even got to be the second star of the game, which warmed my cold, blackened heart.

–Out of the sleepwalking there were other guys who had a decent night. Carl Dahlstrom played mostly intelligently at the blue line, and he ended the night with a 52.6 CF% while taking 55% of his starts in his own zone. Top Cat of course scored a shootout goal that should have ended the game, and well before that he made excellent passes that would have been assists had they been to anyone more competent than Brent Seabrook and Ryan Hartman.

–Patrick Kane was involved in both goals: on the first, Our Cousin Vinny made a pass that was spot on, and Kane picked up his own rebound; on the second he assisted on Wide Dick’s goal where Arty managed to sneak behind Karlsson. But, both times the Hawks scored they gave it right back all too quickly, and Kane also stood by and literally watched as Duchene sped past him and scored the tying goal, so there was that. His shootout goal was appreciated, but don’t go thinking Kane’s give-a-shit meter was anywhere above the “Ah, fuck it” level.

–The power play remained dismal, with their only two chances being entirely useless.

–Overall, it was a back-and-forth of two bad teams, where one just sucked a little bit less than the other. However, we have to cherish each win because who knows when another one may come along. The Hawks have gotten beat by shitty teams enough times this season; if we can be on the other end of it for once, we should appreciate it. And hey, maybe some teams were impressed with Anisimov’s goal and will put more thought towards taking that contract off our hands. A girl can dream…

This is what happens when an unstoppable force meets an immovable object.

Something tells me this will not be a short series.

No more wasting time; let’s get to abbreviated bullets before I turn into a werewolf or whatever mythical creature comes out after midnight.

Will he be paid in watches or chocolate?(BU)(SCH)(TSN)

Do the owners want a deal:(SI)

Time for Gary to leave?(GnM)

A once near trade for a Hall-of-Famer:(Hawks)

The Owners must listen: (GnM)

Pissed off sponsors will move this thing along: (CBC)

More excerpts from The Instigator: (OS)