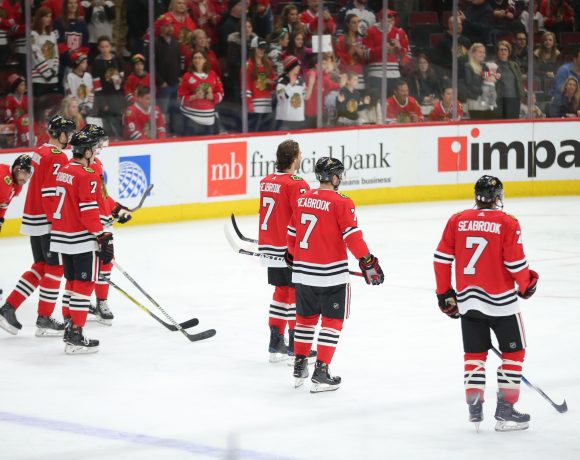 It felt a little like an Irish wake tonight. Yes the season is effectively over, yes the run of playoff appearances is dead (sky point), yet the mood was celebratory, and rightfully so. Nights like tonight are why we watch sports, because when and where else does this much crazy shit happen? We’ll get to the debuts by the kids and the goalie drama a little later, but the main story tonight was that Brent Seabrook hit 1,000 games. To the bullets:

–We give Seabrook a lot of shit around here, but neither his contract nor the natural aging process from which he’s suffering will diminish any of the contributions he’s made. Seabrook is only the fifth player in franchise history to reach 1,000 games, and it was both extremely fun and extremely nostalgic to watch the pregame ceremony and video montage. On the ice there wasn’t much to write home about tonight (one shot, 47 CF%). But it was fun to be reminded of all the positive Seabrook memories, and overlook the problematic present.

–Then later in the first period they ran another video montage, this one for Eddie Olczyk, celebrating him beating colon cancer and getting a clean bill of health recently. The fans gave him a standing ovation, and as this is a subject close to my heart, I was happy to see everyone cheering something positive, which is all too rare these days both in terms of the Hawks and just the world in general.

–And then there were the kids! Dylan Sikura made a very good first impression tonight, with four shots total, three of which came in the first period alone. He had an assist on Gustafsson’s goal for his first NHL point, and then followed it up with another in the third on Top Cat’s goal. The Sikura-Eggshell-Top Cat line was just plain fun to watch, even if they did make me nervous when they were in the defensive zone. (They obviously made Q nervous too because they took 75% of their starts in the offensive zone, but that’s cool.) I prefer my hockey with speed and skill, so despite their inexperience (not counting Top Cat in that) and two of the three of them being of small stature (counting Top Cat in that), I am legitimately excited about what these guys will achieve.

–The saga of the Hawks goaltenders continued. Seriously, we’ve reached Spinal Tap drummer status here, with Anton Forsberg somehow getting hurt in warm-ups or some pre-game shenanigans, of course just as he was having a couple good games and making a serious case for himself as the backup for next year (please backing up Crawford please backing up Crawford I ASK FOR SO LITTLE). He must have trashed a gypsy’s magical tent and gotten cursed or something, because Forsberg is truly the most unlucky man in the NHL. 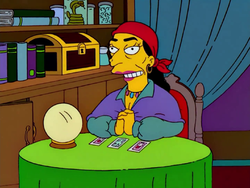 In his place was Collin “One Too Many Ls” Delia, who WAS the second feel-good goalie story this year until the third period. He was stinking it up in the ECHL for most of the season, turned it around, got brought to Rockford recently, and now found himself here after Berube fucked himself out of the job. Delia looked better than the previous fuzzy-moments-story in goal, the Jeff Gl-ASS Experience. Despite giving up a goal to Bryan Little on a tough redirect, and one to Scheifele (which , come on, can you really hold that against the guy?), Delia looked relatively confident in the crease, made some big stops on the likes of Blake Wheeler and Kyle Conner, and had 25 saves until HE TOO got hurt, and had to be replaced by literally some dude off the street. I know it sounds like hyperbole, but it really isn’t—it was a guy named Scott Foster who’s 36 years old and playing in a men’s league at Johnny’s Ice House. You can’t even make this shit up. And yet Foster was perfect, and managed to make a few saves including on Patrik fucking Laine late in the third. It will certainly make for a good story that this guy can tell his grandkids one day.

In all seriousness, the Hawks really need someone to make it through a game for these last few coming up, but at this point, fuck it. They should just hit up the Salt Creek Sports Center in Arlington Heights and grab some roller hockey men’s league goalie, I know a few I can recommend.

–Now, in all honesty the Jets weren’t REALLY trying all that hard, and you can’t blame them. So that sort of skews the results, making the score look more impressive than it really was. But this was genuinely a wild, feel-good, party atmosphere game. I really hope Delia is OK just because that sucks for him, and same for Forsberg. However it was one of those games where I’m just glad I saw it, because if someone just told me about it I wouldn’t have believed it. Despite everything—all the disappointment, missing the playoffs, all of it—this is exactly why we love this sport, it’s exactly why we keep watching even when it “doesn’t matter.” If you didn’t see it, I just hope this does it some justice.

Line of the Night: “Dustin Byfuglien woulda said ‘No, we’re going out there!'” —Foley ejaculating about how classy the Jets were for being on the bench for the Seabrook ceremony.