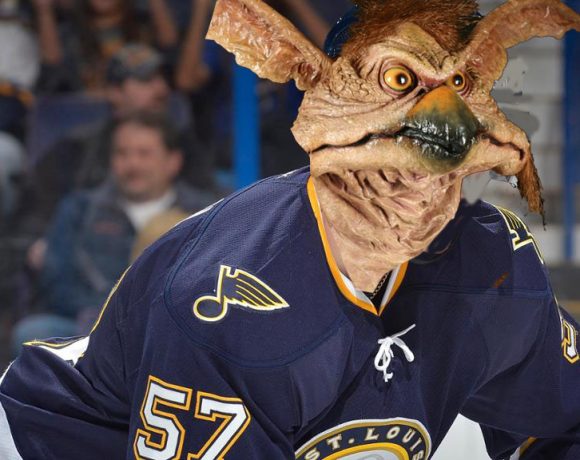 You would think that if you brought David Perron back once, you would learn your lesson. But this is the Blues, this is St. Louis, and “learn” is a word akin to “fornicate” down there. So it’s a third time ’round the Imo’s for our intrepid “Belette de Quebec.”

Oh, we get it. On the surface, Perron looks like a good dash of support scoring. 46 points in his first return season on the wrong side of the river in ’16-’17, and then 66 points last year while partaking in the communal ass-inserted-horseshoe in Vegas. For $4 million a year, it almost seems a steal.

But everyone should know better by now. One, Perron isn’t going to do anything when it matters. He had 1 goal in 15 playoff games last year. Which is a touch better than his no goals in 11 playoff games with the Blues the year before. Or his three goals in 31 previous career playoff games before that. Because as everyone has learned, when the lights are brightest, the cockroaches scatter for the shadows.

And that’s what Perron is. He’s still a dirty shit, who’s going to take penalties that will leave fans and coaches alike with mouth agape and all sense of logic sounding alarms within. He never met a selfish, retaliatory penalty he wouldn’t take with glee, usually with two linesmen holding him and between him and whoever he’s punching in the back of the head. The last time he had less than 50 penalty minutes in a season was 2012, and that’s only because he was still recovering from a concussion suffered when running into Joe Thornton‘s beard.

And it’s not like he comes out ahead in the “pest” department. The most positive he’s been when weighing the penalties he takes over the ones he draws is four in a season. That’s four power plays for his team for 82, and that’s once. That’s the best he’s done. Why is that worth it? Why are these pests so valued if they hamstring you just as much as they give you an advantage? If you want an idea what a good number looks like, Connor McDavid led the league last year with a +21. Matthew Tkachuk, also something of a jackass like Perron, was at +17.

Perron only is making $4 million for the next four years, so it’s not a calamity of a deal. At least not yet. And on the third line with Tyler Bozak, he might even score a bit. If he does, the Blues are going to have three dangerous lines. If he’s intent on being a shithead, which is what happens in St. Louis, they’ll be the same Blues as always.