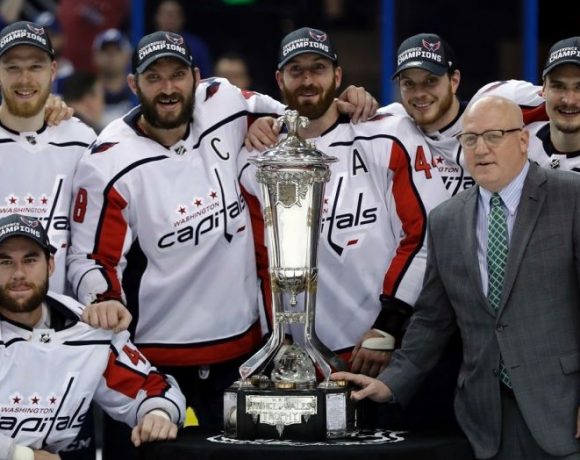 It’s probably harder to compare to other eras, but it feels like across all sports we’ve seen the breaking down of a lot of “truths” the past 15 years or so. “Truths” in that teams that would never win or couldn’t get past a certain point have done so. I suppose it starts with the Red Sox in 2004. Then the White Sox…wait, that never happened. Sorry. But then the Colts, who it was thought would never break through (PUKE). Phillies. Saints. Hawks. LeBron. Giants. Bruins. Kings. Seahawks, though they didn’t really have the tradition. Royals. Cleveland in any way. The small matter of a plucky baseball team on the Northside. Eagles.

Not that that list is completely correct. The Royals had won somewhat close to that before, but you get it. And now the Capitals are going to play for the Cup. It’s not a total, out-in-the-wilderness story, because if you really rack your memory files you may recall that the Caps were in the Final in ’98. You don’t remember anything about that series, because it lasted just two games and then afterwards the Caps became the first team to surrender, such was their outsized deficit in every category to Scum. I think Peter Bondra was on that team? I know it didn’t matter, and the Caps basically were stand-ins and and extras for the rest of the league until Alex Ovechkin showed up. The only other memory I, and probably every other hockey fan my age, have of the Caps before Ovie was Dale Hunter poleaxing Pierre Turgeon ten seconds after Turgeon scored to essentially send the Caps out of the playoffs in 1993.

But since Ovie debuted, and ever since he basically became the game’s greatest scorer–and that’s what he is, given the environment and style of the game today–the questions have followed of when he will win a Cup. The skepticism started before he’d ever played a game, given his nationality and given the leanings of hockey media. They only got louder when it took Sidney Crosby, with whom he has been and will be forever linked through no doing of his own other than playing in the same conference, only took three seasons to get to a Final and four to win it. Being that he wasn’t born on these shores, and being that most of hockey media has never had the patience to mask its xenophobia with much more than a Kleenex,  the questions and commentary quickly gained a sharp edge.

And Ovechkin and the Caps kept running into the same wall. Well, two walls. Either it was the second round or it was the Rangers. The latter doesn’t make any sense, because the Rangers have never been remarkable in any way other than their goalie. The former did, because it was usually Crosby waiting. But Crosby had Malkin. And Crosby had a goalie playing out of his mind, be it Fleury or Murray. Ovie had Backstrom, but something always went wrong, and it was never Ovie. Oh sure, he took the blame. And he never shied from it, because that’s what you do when you’re the face of a team for over a decade. You could tell it hurt him. You could tell he cared, perhaps too much, which frustrated the amassed writers as it robbed them of a favorite cudgel that they used to beat players from the other side of the Atlantic. How could our beloved trophy mean as much to “dem ferners?!” But it was obvious it did to Ovie. So they had to find other things. So did his coaches and team. He didn’t backcheck. He only cared about scoring. He didn’t work hard enough. Bruce Boudreau, Dale Hunter and Adam Oates tried to cover their own incompetence by throwing Ovechkin under the bus, and given they were “good hockey men” it must be true, right? Perhaps Trotz’s greatest move upon arriving was just letting Ovechkin be Ovechkin and not prepare him as a human shield when things went wrong. Strange how Trotz and Ovie are now where those three coaches have never and will never be, mostly because Hunter really likes yelling at children.

After the last two years, when the Caps were probably the best team in the league and absolutely no one thought they would beat the Penguins and then promptly didn’t, you’d be forgiven for thinking it would never happen. They had their best bullets, they missed, and you know the lesson when you come at the king.

You could write all those things about Barry Trotz as well, who is also here for the first time. He’d never been this far either, and was discarded from a team that thought he couldn’t ever get them there. While it hasn’t always been the most pleasing on the eye, Trotz has coached the hell out of this team. They’re not as good as the Lightning. They might not be as good as the Penguins, whatever the standings might have said. Maybe they are. And they’ve roundly beaten both at times. Sure, maybe they got bounces in Game 7, but they earned their spot there by beating the shit out of the Bolts in Games 1, 2, and 6. They also did so in Game 4, and didn’t get the luck. The Caps have trapped at times. They’ve attacked weak points furiously at others. They’ve done everything, and Trotz has gotten this team to buy into whatever he’s asked that night. This is his masterpiece.

And here they are. They’ve broken through, with one more step to go. Should they get four more wins, there won’t be too many teams that will remain “cursed,” as bullshit as that term is. Ill-starred maybe. The Canucks for sure, who have lost two Game 7s in the Final without ever winning. I guess the Leafs, their fans do talk about it on occasion. The Blues, though there’s nothing epic so much has comedic about their history. But the Sharks haven’t been around long enough. Neither have the Panthers. Or the Jackets. No one cares about the Senators enough, and same thing. The Flyers would like to tell you it’s them, but it isn’t really.

The list is dwindling. And that’s the thing about sports. As Barry Petcheskey pointed out on Deadspin today, “the story is always being written.” Whatever narrative is current among your team, it’s not forever. Even if it takes 108 years, in some cases. The Caps were that team. Now they may not be. Some times hockey just bends that way. Sometimes sports bends that way. 1000 monkeys and 1000 typewriters and such.

Go get it, Alex. You’ve more than earned it.