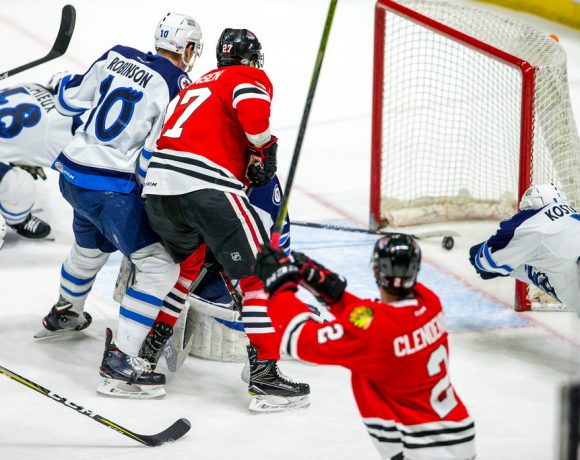 High On The Hog: Tracking The Moose

The Rockford IceHogs get the Central Division Final underway tonight when they take on the Manitoba Moose at Bell MTS Place. Game 2 follows in short order on Saturday. From there, the action comes to the BMO Harris Bank Center for the next three games in the series.

The piglets are well-rested, having played last in Chicago eight days ago. Manitoba finished off Grand Rapids back on Monday in Game 5 of their first-round tilt.

As mentioned earlier this week, Rockford has never advanced to the third-round of the Calder Cup Playoffs. This is a series the IceHogs is quite capable of winning, though. Here are some thoughts on the Moose and how this match-up figures to play out.

Manitoba was the juggernaut of the AHL in the 2017 portion of the schedule. The Moose were 24-6-1-2 in the first three months of the season, building a double-digit point lead in the Central Division. That cushion would evaporate in the final three months. Chicago and Grand Rapids caught Manitoba in the final two weeks as the Moose staggered home.

I was pretty bold in my belief that Grand Rapids would come out of the first-round clash. However, Manitoba was able to take advantage of some missing pieces to the Griffins lineup and played well on the road. They won two of three games at Van Andel Arena, including a 5-1 Game 5 triumph.

Manitoba can boast the AHL Coach Of The Year (Pascal Vincent), the AHL Defenseman Of The Year (Sami Niku) and the AHL Rookie Of The Year (Mason Appleton). The Moose proved their playoff mettle; this is physical team that can fill the net.

The Manitoba roster is also dotted with AHL veteran talent enjoying career years. Specifically, captain Patrice Cormier (22 G, 21 A), 6’6″ wing Buddy Robinson (25 G, 28 A) and former Hogs defenseman Cameron Schilling (6 G, 26 A). Forward J.C. Lipon is a familiar face who had a hat trick in Rockford November 28 on the way to a career-high of 17 goals.

Niku, who totaled 54 points (16 G, 38 A) on the season, would have likely taken home rookie of the year hardware if not for Appleton, who led the Moose with 66 points (22 G, 44 A). Manitoba is a talented squad despite the fact that their best hockey was played in the first three months.

The Moose visited Rockford November 28. at the peak of their tear through the league, blowing out the Hogs 8-1. In a return visit February 2, Rockford took Manitoba to overtime before losing 4-3.

Late in the season, the IceHogs traveled north for a pair of games in Winnipeg, besting the Moose 4-2 and 4-3 in the span of three days.

Anchoring the Manitoba attack in the first half was goalie Michael Hutchinson, who finished season with a 17-5-4 record to go with a 2.08 GAA and a .935 save percentage. Hutchinson spent most of the second half of the season with Winnipeg, though he was in net March 28 when the Hogs dropped four goals on Manitoba.

The man Rockford will be facing in net in this series is Eric Comrie. While he is a bit of a drop-off from Hutchinson, Comrie still enjoyed his best full season in the AHL with a 2.58 GAA and a .916 save percentage. He was in the cage in Rockford February 2 for the 4-3 overtime win.

Adam Clendening (1 G, 5 A) and Chris DiDomenico (1 G, 5 A) each had six points against Manitoba this season, though two of DiDomenico’s helpers came while he was with Belleville. Tyler Sikura had three goals against the Moose and had two-point efforts in both of Rockford’s victories.

Brenden Lemieux paced Manitoba in head-to-head competition with the IceHogs; in three games, Lemieux wound up with six points (2 G, 4 A). Along with Lipon, Cormier, Appleton, C Nic Petan and D Jan Kostelnek were all mutli-goal scorers against Rockford.

Any special teams comparisons from the regular season can be thrown out the window. Here’s all you need to know in regards to the Hogs; their first-round power play was the best of the 16 playoff teams at 38.9 percent efficiency. The penalty kill (85.7) was fifth.

When it comes to the man advantage (and even strengh, to be honest), the Rockford offense is going to be facilitated by the passing and shooting of defensemen Clendening (16 shots in the three-game set with Chicago) and Cody Franson (12 shots).

Can the depth boasted by the Hogs NHL-enhanced roster wear down Manitoba over 60 minutes? Will Collin Delia, who was rock-solid in round one, continue to stand tall in net? If the Moose shut down Rockford’s veterans, can the kids pick up the slack?

The answers will begin to take shape this weekend. Follow me @JonFromi for thoughts and updates of Games 1 and 2. 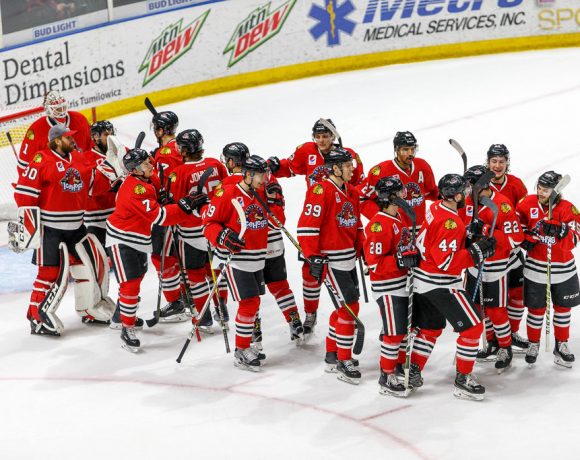 High On The Hog: Who’s It Gonna Be?

The Rockford IceHogs, AHL affiliate of the Chicago Blackhawks, are playing a waiting game until later this evening. Monday night, Rockford’s Central Division Final opponent will be decided when Manitoba or Grand Rapids wrap up their Game 5 tilt.

The IceHogs have been to the second round of the Calder Cup Playoffs on two previous occasions since the Hawks affiliate arrived in the Forest City. They have never advanced past this round.

Back in 2008, Rockford’s inaugural campaign, the Hogs were eliminated by the Chicago Wolves. The piglets swept Chicago last week to advance to their current position.

In 2014-15, the IceHogs finished a single point behind Grand Rapids for the top spot in the Midwest Division with a franchise-high 46-23-0-5 mark. They swept Texas to meet the Griffins in round two. Grand Rapids then dispensed the Hogs in five games.

Will the third appearance in the second round be the charm for Rockford? The ingredients for a successful postseason run have been stewing over the course of the past six weeks.

How’s That, You Say? Here’s Why The Arrow Is Pointing North:

The IceHogs are playing their best hockey of the season.

Rockford finished the regular season 14-5-1-1 before winning three straight against the division champions in the opening round of postseason action.

They’re getting loads of veteran leadership at both ends of the ice.

Veteran players like Chris DiDomenico (arguably the Hogs best forward the past few weeks), Lance Bouma and Andreas Martinsen have added a layer of ruggedness that has served Rockford well as the physical nature of playoff hockey becomes more of a factor. Cody Franson and Adam Clendening deepened the back end dramatically.

Their special teams, particularly the power play, has kicked it up a couple of notches.

Heading into the Wolves series, I pointed out that just looking at Rockford’s pathetic man-advantage numbers would be misleading. I’m guessing Chicago knew that going in. I’m darn sure the Wolves knew that when they skated off the Allstate Arena ice following their 4-3 loss to Rockford.

The IceHogs converted their power-play chances at a rate of 39 percent (7-18) against Chicago. ‘Nuff said.

The goal-tending has been very good.

Rookie Collin Delia has earned the right to anchor the Hogs in net regardless of the opposition in the division final. He was by far the hottest goalie in town heading into the postseason, going 10-1-2 in his final 13 starts of the regular season.

In three playoff games (nearly four, with the extra sessions Thursday night), Delia posted three wins with a 1.62 GAA and a .927 save percentage.

Since the IceHogs punched their ticket to the second round, speculation on who Rockford would be better off facing has run rampant. Personally, I’d rather face the team that lost their best-of-five series. That’s not the way it works, though.

I figured that the Griffins would make quick work of a slumping Manitoba club, but the Moose have played well. Grand Rapids had to win Thursday to force a Game 5. Either of these teams are going to be a formidable opponent.

Eric Tangradi, the Griffins leading goal-scorer and a veteran of AHL playoff battles, is out for Game 5 via suspension. Both teams have won in the other’s barn this series, with Game 5 being in Grand Rapids. It could go either way, to be honest.

Later this week, when the IceHogs have an opponent, I will return with a in-depth look at what could be a historic playoff series for the folks here in Winnebago County.