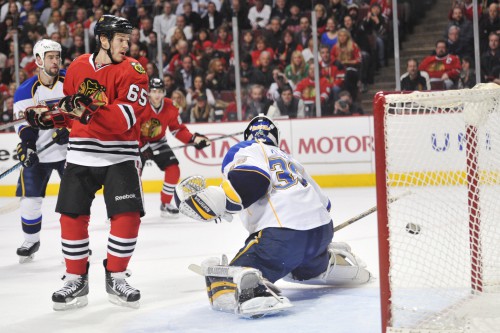 On this blog recently, we’ve spent a lot of time debating whether the Hawks are either bored or tired (the answer is probably both, but what fun is that to settle for?) We’ve seen the holes in the game, the dead-ass performances, the spikes of dominance, and wondered what it all meant for when it really counts.

Based on tonight’s and other recent “big” games, I suppose I’m starting to lean towards bored. And it’s not in the glow of this performance only, though the Hawks did completely muzzle the team with the most points in the league. On other occasions where the bright lights are on and the opponent has the Hawks complete attention, we’ve seen it. Detroit was one victim. The Ducks in Anaheim another. Boston’s trip to Chicago saw the Hawks play extremely well and take a shootout. There are a couple others I haven’t mentioned.

Maybe it’s both in that the Hawks can do it when they really want to but can’t bring it every game due to fading legs when they don’t particularly. I guess we won’t know until the season’s over, as you can bet Joel Quenneville is going to demand they snap into gear full-time heading into the postseason.

But for one night, the Hawks brought the game we’ve come to love. It could have been any of the league’s premier teamed that was swallowed whole by the Hawks’ complete game and I’d feel as good (well, maybe not all the way). It’s still there when they need it. Let’s be happy with that.