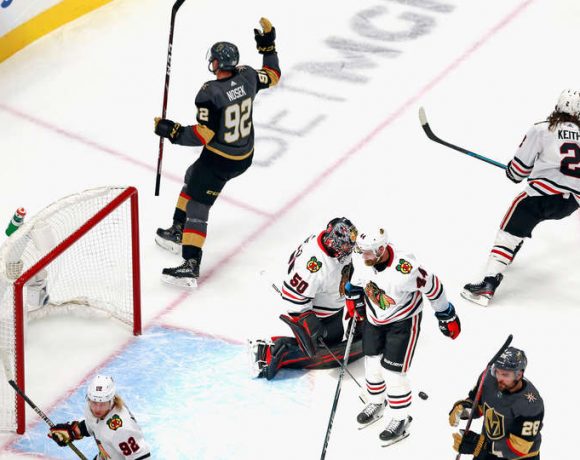 I don’t mean to be too defeatist, nor to absolutist, but if the Hawks are to have any shot at winning this series, they need to win games like tonight. We’ll dig into the details shortly, but the TL;DR of it to lead with here is that if you’re going to let a team like Vegas control the play for most the play over three periods and still be opportunistic enough to take them OT, you have to cash in and win the game. That is easier said than done, obviously, but I think if things are to go the same way from a possession/shot-share standpoint in more games moving forward, the Hawks won’t be in them like they were in this one. Let’s dig in:

– So yeah, it’s probably not a good idea to let your opponent control 71.43% of the shot attempts in the third period of a tie game. Unfortunately that is what CCYP’s team did. The especially discouraging aspect of that number is that it came right after a second period that the Hawks controlled for the most part, with a 57.58% CF themselves, and three goals in that frame to show for it. So to come out of a period like that and turn in the effort they did in the third period and then the OT (more in a moment) is not exactly inspiring. Then again, when your coach is about as intelligent and inspiring as a dead tree, it is probably hard to find inspiration.

– More of the same in the OT – Vegas had an impressive 64.71% CF in the extra frame, thought a good chunk of that might be buoyed by the flurry they had at the end just before scoring the winning goal. The Hawks did have some decent chances in the frame, so I am not going to act like that Corsi number is especially damning, but it is further evidence of my original point that Colliton is not getting this team ready to A) show up when they need to, nor B) build off any positive momentum they may create in spite of him.

– I am in love with Kirby Dach. Never been so happy to eat my words on a draft pick in my life. His goal today was nothing special, but it was the direct result of making the smart play and being in the right spot, which is a strong foundation for a young player with his skill to build on. On top of that, the kid is so good in transition to the point that he could be lethal there, and soon. Unfortunately, Dach’s learning curve in these playoffs and flashy moments didn’t do enough to save him from getting absolutely shelled in shot attempts (33.33 CF%). It be that way sometime.

– Scratching Adam Boqvist against a team that moves the puck and skates so much faster than you is a move so smooth brained and stupid that I am simply too intelligent to even consider how Coach Bowling Ball Brain came up with it. I am not going to act like Boqvist has been some type of world beater in this postseason, but he hasn’t been downright awful either, in my opinion. And the main silver lining to the Hawks being in this series, which everyone and their mother knows is not going to last more than 5 games, is to get players like Boqvist meaningful experience playing meaningful games. Colliton scratched him but kept Olli Maatta in the lineup. I just…. I actually cannot think of a worthy justification for such a thing.

– I know it’s an easy and defensible card to pull, but it’s still incredible that the only ace up Colliton’s sleeve now two years into the job is to just throw Kane onto the ice as much as physically possible. So the summation of these last two points comes to this – Hey Jeremy, maybe try switching up some tactics. Or maybe just do the honorable thing by hopping on the next plane out of Edmonton and resigning.

– Next game is Saturday. Until then. 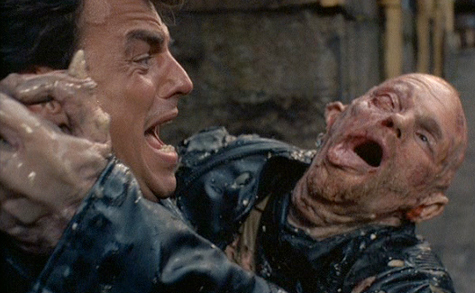 Let’s not bury the lede you came for, dear reader. So long as the NHL plays this summer, the 2019–2020 Chicago Blackhawks are a playoff team (sort of), just like the Brain Trust fucking said. Chicago will get its first taste of playoff hockey (sort of) since Nashville smacked it out of their mouths in their piss yellows three years ago.

Given the circumstances, there was no chance that whatever the Board of Governors (or whoever) and NHLPA came up with would be the belle of the ball. But the whole what-have-you they did come up with isn’t as horrid as you’d expect from this condom-in-the-toilet of a league. The seven worst teams in the league don’t get playoff hockey. They’ll likely have any playoffs in just two Hub Cities to reduce travel. Bettman talked about the nebulous concept of “having enough testing” before things resume. And most importantly for us, the Hawks will be there, which, combined with the Habs making it, is a Gribble of an idea.

So, here’s what we know and don’t know, relative to the Blackhawks (mostly).

The Regular Season is over. All stats, awards, and the like will be based on where the league stood when it paused on March 12. DETROIT SUCKS.

Playoffs determined by points percentage. Never hurts to play in a conference with the Ducks, Sharks (apparently), and Kings, the only teams worse than the Hawks in the West. Two teams that got the pud-end of this deal are Buffalo and New Jersey, who each played two fewer games than Montreal and could have jettisoned over them with just one win in either game. Back and to the left.

Top seeds play round robin, lower seeds play elimination. The top four teams from each Conference will play each other in a round-robin format to determine their seeds. This round robin will use REGULAR SEASON RULES, which includes five-minute OTs and the spicy late-Sunday-morning giardiniera fart that is the shootout. If the round robin ends in a seeding tie, then regular season points percentage will determine the higher seed. Each of these eight teams have a guaranteed spot in the first round and will end up playing one of the remaining 16 teams that will play qualifying rounds.

The bottom eight teams in each Conference will play a best-of-five series for a shot to move on to the first round. The qualifying round uses PLAYOFF OVERTIME RULES, which is a full fucking 20 minutes of overtime hockey until there’s a fucking winner, baby. Who plays whom is based on points percentage. So, the 5 seed faces the 12 seed, the 6 seed faces the 11 seed, and so on. The winners of the qualifying rounds in each Conference will play one of the four top-seeded teams in their Conference, but there’s not much detail after that.

The Blackhawks will play the Oilers when shit gets going. The Hawks get first dibs at the Connor McDavid experience. The Hawks managed to beat Edmonton two of three times during the regular season. With the qualifying round taking a best-of-five format, the Hawks have a legitimate shot at not just making the playoffs (sort of) but also advancing.

At the season’s pause, the Oilers were a bottom-five Corsi team. They have a game-breaking forward and current Art Ross winner. Aside from goaltending, when the Oilers look into a mirror, the Blackhawks scream back. In the words of ol’ JR, this has SLOBBERKNOCKER written all over it. If ever this city were going to appreciate the beauty of Corey Crawford, this playoff series would be it. With at least three future Hall of Famers between these forward corps and a sun-bleached blown-out diaper on the ass ends of each team, goaltending will likely be the thing that wins this series. And Corey Crawford is fucking better than Mike Smith, 2011–12 be damned.

The draft will be a fucking zoo. We’ll probably talk more about this in a different post, but the Hawks could have a 3% chance at the first overall pick if they’re eliminated by the Oilers, and some other goofy shit also happens that we don’t feel like thinking about right this second.

What We Don’t Know

Where or when things will start. We know that teams will end up playing in one of two Hub Cities. One city will serve as a hub for the East, the other a hub for the West. Bettman mentioned 12 potential cities they could use as a hub, including Chicago, Toronto, Las Vegas, and Edmonton (but not Arkush). But outside of that, we don’t know which cities they’ll play in.

We also don’t know exactly when things will start. Bettman made it clear though that formal training camps—otherwise known as “Phase 3”—would not start anytime before July 1. So, best case, you’re likely not looking at any actual hockey until about mid-July, since the NHL hasn’t even reached Phase 2 (voluntary practices at home facilities with like six total players or something). That assumes that the NHL will have the means—both physically and financially—to conduct the constant COVID-19 testing necessary to prevent another massive outbreak.

What the playoffs look like after the qualifying rounds. After the round robin and qualifiers, there’s not much info. Bettman explicitly said that they will not reveal how matchups work because it’s what the players wanted. He hinted that they’ll likely do it by seeding or brackets, which is a welcome respite from their bend over, shit on the wall, and read the Rorschach method they’ve been using since any of the previous lockouts.

The only thing we know for sure is that Conference Finals and the Cup will be a best of seven.

Whether any of this will happen at all. Bettman made a point to say that the NHL won’t resume play until they get the go-ahead from health professionals and governments to do so. Given how cohesive and in agreement everyone in this armpit nation has been about even the simplest of sacrifices in such aspects as “wearing a fucking mask in public even if you’re a healthy person” and “not drinking bleach as a cure,” there’s still a very real possibility that this is all window dressing.

We’ll have thoughts on all this shit as more information trickles out. But for us as Blackhawks fans, you’ll take this setup. While the Oilers aren’t a pushover, they’re the precise team that the Hawks can at least try to outgun.

Yes, McDavid and Draisaitl are going to kick gum and chew ass against whichever combination of Seeler–Maatta–Gilbert–Koekkoek Coach Nathan For You throws out there. But they’ll also have to deal with Playoff Garbage Dick on months of rest, which probably means 40 minutes of Kane every fucking night. This playoff format fits right into the strengths of Colliton’s system. 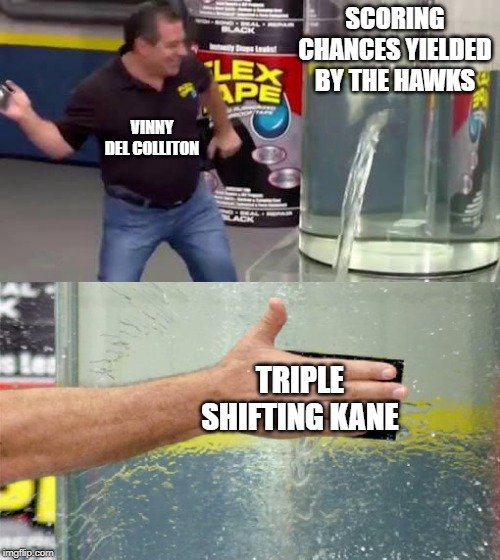 And until Corey Crawford shows us that he isn’t the guy doing all the fucking, it’s hard to bet against him in favor of Sike Mmith.