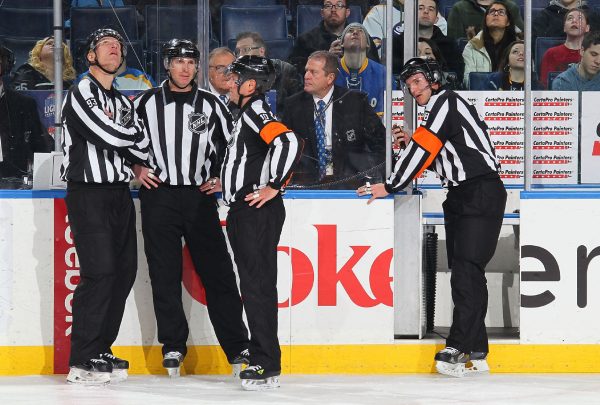 One day, if it hasn’t already, colleges are going to have classes that demonstrate how replay in sports demonstrate the perils of technological advancement in society. Because when you first hear of it, or in a vacuum, the idea of using video to aid  in the officiating and administration of sports makes total sense. And then you get it, and problems you never envisioned lead to other problems you never envisioned and suddenly we’re lost.

So it was with official reviews in the NHL, which used to only be restricted to goals themselves. And then we got the toe-in-the-crease debate. And then that went away. And then goalie interference came into it. And now it’s offsides and delay of game and whatever the hell else. And we end up asking ourselves every time, “Did it count?”

I’m kind of stunned that I would take an idea from the NFL, or one the NFL used to have, but all replays need a one-minute clock on them. You’ll recall, long ago, that when the NFL went back to replay it was 90 seconds and then the screen the ref had behind that curtain that didn’t at all look like a peep show would cut off. Then they figured out they could cram three or four more commercials in during replay reviews and all that went to hell.

Well, the NHL isn’t cramming commercials in during its replays (oh god I just gave it away to them, didn’t I?), so that won’t be a concern. Let’s face it, other than maybe two or three replays a season where one angle turns up something that no other one did, a call needing to be overturned is obvious. You see it after the first or no later than the second replay. You can’t miss it. So really, if you can’t see anything after one minute, it’s not conclusive and let’s move the fuck on.

Second, get rid of the challenge. Coaches have better things to do, and implementing your own rules isn’t what professional sports is all about. Just because it works in tennis doesn’t mean it works anywhere else, and the calls in tennis are cut and dried. In or out. It doesn’t work that way in other sports. And honestly, you could get rid of the challenge system in tennis and it would probably be better, given the speed with which they can determine where a ball landed.

Buzz down from Toronto, take a minute, get your decision. This isn’t hard. We all know when a goal needs to be reviewed. We know when it’s close to being over the line or not. We know when there might have been interference. We know when the clock was running down. Simple.

The other problem is of course, the offsides. This was a well intentioned idea that went off the rails. The problem is defining what effected a goal and what didn’t. We’ve seen goals called back that were a good 20 or 30 seconds after whenever the offsides infraction was. And to me, you could trace that back even farther. What if an offsides play isn’t called, the offensive team causes an icing, which allows them to throw out their top line against tired plugs? That could lead to a goal, and technically that goal should have never happened if the offisides was called correctly.

There probably isn’t a perfect solution here. Moving to a “plane” of the blue line instead of having to have a skate grounded outside the line might help, but we’re still going to need to read replays to see where a foot is. Still, it’s a line and it’s easier to determine if a foot is waving over it at any height than what we’ve got now.

And don’t give me any nonsense about the puck needing to be touched before anyone can be offsides or not. Either the puck has to be first in or it doesn’t. Then we won’t get that horseshit we got in Minnesota last year.

It’s easy. But hockey has never been able to determine what is easy or not.