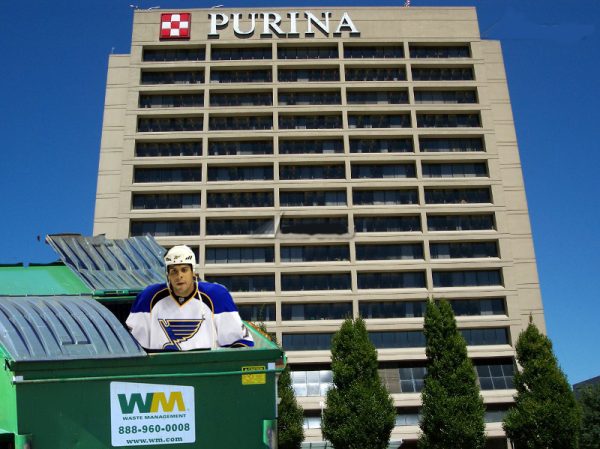 Here in Chicago, we usually don’t get much of a spring. Even with the temperate/weak-ass winter we had this time around, the April-May stretch bounces between glimpses of actual summer and then visions of November. Usually in this place it’s just cool and gray until somewhere around Memorial Day, and then the next day is gorgeous and it’s summer/construction. We don’t slowly ramp up to summer. It just arrives like Monty Python’s foot.

So rites of spring, we don’t really recognize them. We see leaves on trees but are suspicious. Our allergies kick up at various times, so it’s not much of an indicator either. We have to make up our own. The ivy showing up on the outfield wall at Wrigley. Streetfests and outdoor music festivals start releasing their schedules and tickets go on sale. Sadly, shootings go up, if it’s even possible at this point.

And oh yeah, the St. Louis Blues reveal that nothing has changed, and they’re still a collection of dumbasses trying to play a game the sport has long ago left behind.

Well, I’d like to think the sport has left it behind. But it really hasn’t, has it? Two nights in a row, we’ve watched two of the four or five most popular players in the league get domed to serve… well, what purpose? Crosby’s scoring chance had already passed before Niskanen took aim. Joel Edmundson, who really couldn’t be more perfectly named for a Blue, wanted retaliation for… well I’m not sure what exactly. And if it were explained to me I’m sure it would make less sense. Anyway, he was able to somehow get PK Subban an equal penalty for hitting him in the head, so maybe he’s a genius under the surface that I’ll never understand. This is some fucking sport they’ve got here.

Let’s be clear, the Blues have basically gotten their head handed to them the past three games. But thanks to Jay Gallon, who despite their best efforts for the past three years has somehow blossomed into a really good goalie, they’ve won one of those and been able to hang around the other two. And it’s because of him that this series isn’t over yet. But check out their adjusted Corsi number the past three games, and make sure you’re not drinking anything when you do: 45.0% last night, 44.1% in Game 3, and 36.9% in Game 2, the one they won!

But of course, that can’t be the problem because this is the Blues, so there was Mike Yeo bitching about the refs because they had the temerity to call penalties on all the Blues bullshit that they’ve been practicing for years. He was joined by new CAPTAIN Alex Pietrangelo. Maybe OrangeJello should worry about not getting danced on during play, but that could be just me.

The Blues clearly thought they were going to show up and push the Preds around last night. It made for simply awful viewing, as one team wasn’t interested in completing more than two passes in a row and the other knew it just had to keep pushing the puck past the roving hordes of the other and then figure it out later. It was disjointed, and sloppy, because that’s what the Blues wanted. And they still lost.

There are honestly times when I think the Blues are starting to get it. Jettisoning Ken Hitchcock was the last one, but apparently his psychosis and infested Mike Yeo’s brain. Or maybe Yeo is just smart enough to realize that with his completely immobile blue line, he just can’t run with the Predators who have speed everywhere. So this is his only choice.

But this is always the Blues only choice. It always comes to this. They couldn’t stick with the Hawks three years ago. They couldn’t stick with the Wild the next year, and Allen wasn’t ready. They got by a depleted Hawks team and a Stars team without a goalie and thought they had it all figured out. Until the Sharks were the next team to show them that Schwartz and Tarasenko simply aren’t enough.

It’ll most likely be the same story this year, and the next, and the one after that. They’ll realize they’re short, and let their shit demons like Reaves and Edmundson and whatever they’ve turned Upshall into and Perron try and fart and belch their way past opponents. And it won’t work. And then they’ll bark about how the refs didn’t let them play their game, because that game is actually kind of against the rules? And they’ll take their usual spring seat, and watch teams that have loaded up on things like McDavid and Draisaitl, Subban and Josi and Forsberg, Gaudreau and Monahan, and maybe a surprise or two, and they still won’t figure out how they got there.