Sit Back, Relax, and Strap it Down – ’17-’18 Player Previews – Vinnie Hinostroza 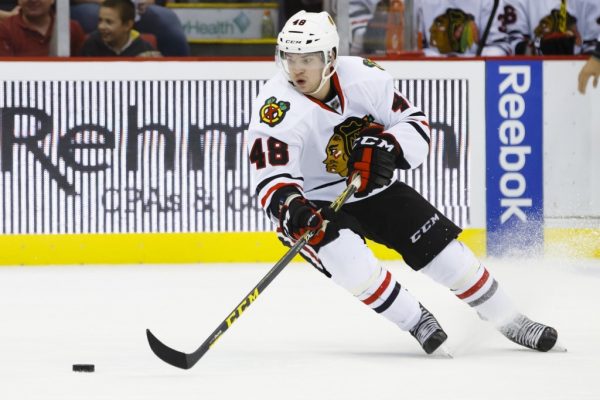 Vinnie Hinostroza—whenever I hear that name, I’m immediately back in Elmwood Park at my great-uncle’s cousin’s house for some random relative-of-a-relative’s baptism, or maybe a birthday, stuck in an Easter-egg colored taffeta dress with tights, making awkward conversation with the other pre-pubescent kids who are there not by choice. And I bet if you ask Vinnie, he would know it’s called gravy, not sauce.

A Look Back: For everyone else who doesn’t associate Hinostroza with plastic-covered couches, let’s take a look at his numbers. He was good but not great last year. Playing on the third and fourth lines with a rotating cast of bottom-six characters, he did manage 14 points. And that was in under 50 games—he got sent back to Rockford in February and only reappeared in one more regular-season game in April before getting thrown into game 2 against the Predators (and you can’t really blame a young, nervous fourth-liner for not making a difference there, can you? Well, if you’re Q, maybe you can).

What Hinostroza has going for him is speed. He’s on the diminutive side (5’9”) but he’s a shifty little fella. Last season he had 27 takeaways to 15 giveaways, which honestly surprised me. I think I just expect a little guy to get muscled off the puck by third- and fourth-line oafs, but our boy Vinnie played those oafs for fools almost twice as often as they out-muscled him. He was a -1 with a 7.9 shot percentage, all of which is rather underwhelming. But isn’t that what the fourth line is all about? Underwhelming guys who kill enough time for the better players to catch their breath?

Because he’s young (23) there isn’t too much to go on from past years. But one theme seems to be a decent contribution of assists wherever he plays. In two seasons at Notre Dame (ugh) he only had 19 goals but 57 assists in 76 total games. In 2015-16 he was a total deer in the headlights in his seven games with the Hawks, scoring exactly zero points, but in 66 games with Rockford that year he racked up an assist basically half the time (33 A). So he seems to be one to dish the puck rather than shoot it himself. Is there a way to translate that to production or at least a valuable contribution on the fourth line?

A Look Ahead: And the fourth line is likely the only spot available to Hinostroza at this point. We’ve pretty much established that he’s not top-6 material, and the third line seems to be set with Hartman-Anisimov-Sharp. Now, should Sharp break his hip, fall and can’t get up, or have any other nightmare-of-aging befall him, then maybe Vinnie has a shot. But more realistically, he and Working Class Kero will anchor a decent fourth line with a carousel of bums to fill out the last spot.

I’ve genuinely enjoyed watching Tanner Kero lately, and he and Hinostroza had some success last year. Working Class Kero strikes me as kind of a poor man’s Anisimov, so if the two of them can improve enough in the defensive zone to just get the hell out of there, we may be on to something. Hinostroza’s seeming un-selfishness could work well to get the puck to Kero (or at the very least, out of the neutral zone), and eat up time and space, which is really the best you can ask for from a fourth line. There’s reason to believe that Lance Bouma could add some experience and size to the other side of Kero, and if that doesn’t work out, there is no shortage of doltish animals to trot out there: Hayden has size to tie up the rest of the bums while Kero and Hinostroza make a break for freedom and move the puck out, or even though it will be painful to watch, Tootoo or Wingels could theoretically step in for a couple of minutes.

And that’s why Hinostroza should at least get a decent chance at the fourth line. Who the fuck else should be there? Those last two morons shouldn’t be let out of the press box unless disaster strikes and we’re about to forfeit a game due to insufficient players (bubonic plague? Nuclear war? These days really nothing is out of the realm of possibility). Vinnie spent the offseason training with Patrick Kane, and while it physically pains me to advise anyone to do anything like Patrick Kane, in this case it’s actually not a bad idea for Hinostroza to improve his strength without sacrificing his speed, just as our favorite drunk jackass did after his early years. With a paltry cap hit, a mean wrist shot, and a lot to prove, Hinostroza just might be the kind of neighborhood guy we need in the bottom six.