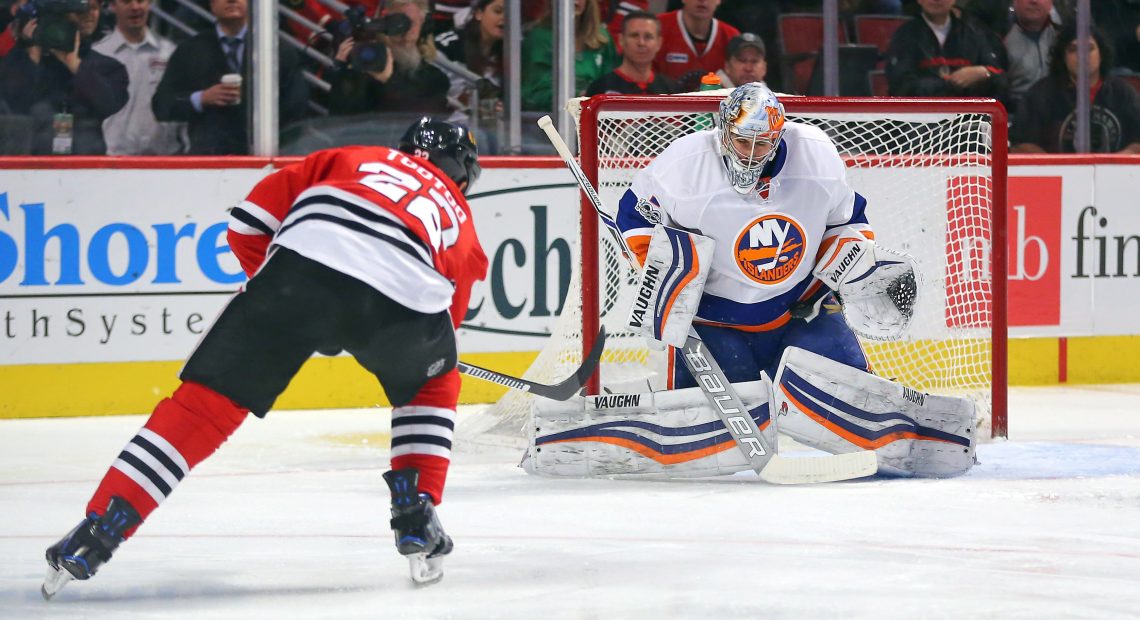 Although for the first 40 minutes of play, few would constitute what they witnessed as fun. With the Islanders coming off a game last night and newly anointed Doug Weight still commanding respect from the locker room, the Islanders were more than happy to stack three guys across the blue line. The Hawks, missing two of their top 6 in Anisimov and Nick Schmaltz, struggled with generating any pressure off the rush because of this as well as getting shots through the pile of bodies Brooklyn was stacking in front of Thomas Greiss.

The result was a 1-0 deficit for the Hawks heading into the third.

In other times, we’ve seen the Hawks sort of sleepwalk through games like these. This, however, is a time where the Hawks are quite engaged. And as the Islanders held on for dear life, the Hawks threw everything they could at Greiss in the third. Greiss was up to the challenge every time with stellar saves on Marian Hossa, Ryan Hartman and Artemi Panarin among others. It wasn’t until a timeout and a set face-off play from drawn up by Kevin Dineen that the Hawks finally solved him.

One point was drawn and a thrilling, but scoreless overtime later, it came down to a skills competition.

–The Islanders run one crazy penalty-kill system. All four of their killers are constantly moving forward and they send one kamikaze forward to disrupt any passes at the top of the blue line.  You may recall in the first meeting between these two teams, the Hawks were able to pick apart the aggressive Islander penalty killers leading to multiple easy tap-ins. Tonight, the Islanders were just as aggressive and hectic. The difference was the Hawks weren’t able to exploit their eagerness.

Prior to Brock Nelson’s short-handed tally, the Islanders appeared to have several chances to jump up and create an odd man rush while penalty killing. Instead they chose to ice the puck. But when Brian Campbell made an ill-advised pinch and the Islanders penalty about to expire, they certainly didn’t hesitate to pounce. With one pass, the Islanders were off and running on a 2-on-1.

–Someday when Kevin Dineen is a head coach again, we will reminisce about games like this. Assistant coaches are basically guys and it’s hard to determine what kind of impact they have but this is one game where having an assistant like Dineen is invaluable. As the Hawks huddled during their timeout, you could see Dineen with the whiteboard drawing up a play.

When Jonathan Toews won the ensuing face-off cleanly, we all got to see what the play they were discussing was.

Brent Seabrook and Duncan Keith spread out the Islanders defense with long cross-ice passes with Keith as the trigger-man. Panarin snuck into his typical one-timer position but a little higher than normal as he was well above the face-off circle.

If I had to guess, Keith probably had three options. He could make the pass to Panarin, he could take a shot or he could use Kane as an outlet in the corner; all depending on how the Islanders defended him. Or maybe the idea was always to give the puck to Panarin.

Either way, the Islanders left Panarin way too much room and he made them pay.

Kevin Dineen could’ve drawn up a play that would’ve made Vince Lombardi burst out of his coffin and kiss him on the mouth; it still comes down to the players executing. However, there are very intricate subtleties in what Dineen does that make a big difference. In this case, it was having Panarin slide up a little higher than normal. We’ve seen countless examples of these sorts of things in his almost three years here.

He should be a head coach again soon.

–As Matt mentioned in the preview, John Tavares might be the most under appreciated player in the league. That was more than evident tonight as Tavares was a one-man wrecking crew. The puck seems to be glued to his stick when he has control. He very easily could’ve ended the game in overtime when slid through two Hawks and then fired off a shot from 25 feet out. Corey Crawford was there.

–Josh Ho-Sang wearing his helmet like Niklas Hjalmarsson circa 2008 should be far more offensive to people than whatever number he chooses to wear.

–Another two points and the Predators wait in Nashville tomorrow. They lost a heartbreaker in Montreal on Thursday in PK Subban’s return. It won’t be easy but it will be fun. Until then.