Police and Thieves In The Street: Blackhawks 3, Islanders 2 (OT) 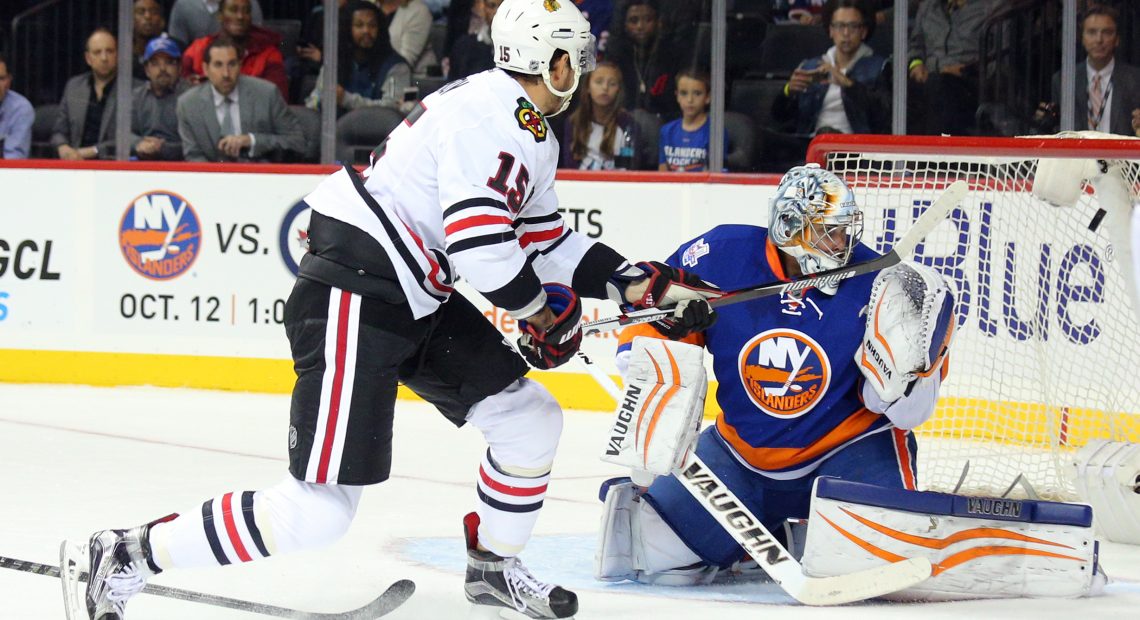 The Barclays Center is already a friendlier arena for the Hawks than the Nassau Coliseum ever was. Even when the Islanders were complete garbage, they traditionally pounded the Hawks in the Rat Palace. In the new arena, the Islanders still pounded them but the Hawks were able to steal two points.

Such the way these things go. On with it.

–Between Corey Crawford falling down while skating for a puck, the puck taking crazy bounces all game, the limited sight lines for fans and the boards needing repair a few times in game, the Barclays Center looks like it was built by the Greek Olympic Committee without the help of the Germans.

Woof. Let’s hope that get better. It would certainly suck if the Nassau Coliseum is an upgrade over a billion dollar palace.

–According to War on Ice, Jonathan Toews, Marian Hossa, Niklas Hjalmarsson and Duncan Keith were a -62 in Corsi +/-. Has that ever happened before? That is so obscene that it has to be considered an anomaly. For now.

–Meanwhile the Hawks bottom three defensemen continue to do everything in their power to make the return of a one-legged Michael Rozsival look like a gift from the gods.

Viktor Svedberg, admittedly playing in his first NHL game, made two horrendous giveaways in the first period. He just shoveled the puck through the slot and put it right on the tape of Jonathan Tavares and Brock Nelson. Luckily, both missed the net. He did play somewhat better as the game went on but at that point, it’s like commending the Berlin Wall for keeping West Germans out.

One thing I’ve noticed about Trevor Daley over these last two games is that he seems to have a bad habit of turning the wrong way when he’s skating backwards. In other words, he’s turning to skate backwards on his left when a player is coming down the right.

Maybe Daley’s feet are fast enough to negate the opposing player getting a step on him that but it’s definitely something to watch for moving forward.

This first two games have served as an important reminder that we’re still under 30 games in the TVR experience. So we don’t have nearly enough to make any kind of definitive statement.

–The Russians. I’m getting the vapors just thinking about them. Artemi Panarin continues to impress. I can’t even imagine what kind of monster he would be if he started to build his upper body strength. He has been so good at getting open and then unleashing bombs. He also danced through the Islanders defense a couple times. One time, it led to him ringing the crossbar and the other time he lost control of the puck but it was still beautiful to watch.

Being as subjective as I can, Viktor Tikhonov played a pretty decent north-south game. He got pucks deep. He made a few plays and certainly was responsible enough defensively not to offend anyone’s sensibilities. He could turn into a very solid checking winger if given the opportunity.

I really thought Artem Anisimov was doing the AK after his short-handed goal. Didn’t happen. Oh well. I’m still having issues getting used to the Hawks having a legitimate 2nd line center that isn’t being bounced around the line up as a 4th line winger. This could take time.

–He Who Shall Not Be Named scored two of the three Hawk goals. The Islanders crowd was heckling him with “No Means No”chants. It was hard to pick that up through the television but apparently it was clear enough in the building. I’m sure this is the mild sauce of what the Hawks will be hearing in opposing buildings as the year progresses.

The two goals he did score were of the garden variety. Toews made an unbelievable pass on the first for him to pop in an empty net and the second took about three bounces before it got past Thomas Greiss.

–Fixing the defense seems like it will be a running theme throughout the year. The Hawks gave up 36 shots on net to the Islanders and 64 shots total. We’re still too early to draw any type of conclusions from that. The Isle is certainly expected to be one of the offensive juggernauts so there is that to keep in mind.