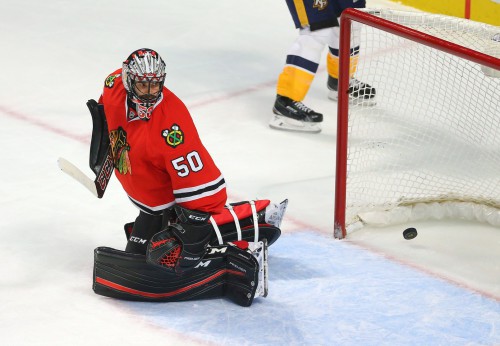 It was one of those weird games where the game was taking a backseat to news off the ice. Do the Hawks always lose the game where they make a trade? Or am I basing that off them getting thoroughly beaten in Tampa last year when they got Timonen and Vermette? I’m probably just making that up. Anyway, the Hawks did have a game to play while the Andrew Ladd trade was being polished off, and it ended in a loss where the Hawks didn’t do anything particularly wrong other than run into Pekka Rinne during his only streak of competence this season. That’s his fourth straight start of giving up two goals or less, and thanks to some spectacular saves, especially in the 1st period, he backstopped the Preds to a 10th unbeaten on the road in a row.

This wasn’t a loss due to whatever holes are on the roster, though TVR did get caught standing for Arvidsson’s equalizer. It was Hjalmarsson and Keith on for the winner. The Hawks created enough through all four lines really but there wasn’t a way past Rinne. After McClure and I tagged Ol’ Shit Hip in both program and blog, this was the only way it was ever going to end.

Anyway, let us away:

-While it was Hjalmarsson chasing for the Preds’ winner, Andrew Shaw didn’t cover himself in glory along the boards. He was a little lackadaisical and let Fisher beat him to the puck, and then didn’t follow Jarnkrok back toward the net when he was best positioned to do so. Shaw’s defensive waywardness is way more pronounced when he plays center, but it doesn’t totally disappear as a winger.

-Teuvo got to play center tonight, but his most impressive shift is when he replaced Anisimov on a change and got to play with Kane and and Panarin. The rest of the night he wasted with plugs on his wings. I for one hope the new formation lands him with Danault and Shaw, or as Shaw’s center because at least Shaw might actually catch one of his passes.

-TVR sucks. There really is no other way to state it.

-Still, I find it curious that in a game where each team got one power play and neither scored, so hence all at even strength, the Hawks lost to a better even-strength team by all the numbers. The Preds are the best chance and shot-suppression team in the league but can’t do it against the Hawks who for the most part can play at their pace. Always open affairs.

-The Preds are about one forward away from being scary, if their goaltending wasn’t shit. And this Rinne streak is probably going to convince GM David Poile he’s “back.” You can pretty much see where this goes. Still, if they could Jarnkrok on a third line with Fisher, that would be pretty deep. But this won’t happen.

-Sekac got his first point as a Hawk, and while he’s hardly a titan or anything he does have one shift or two per game that I notice and you wonder what he could do with slightly better linemates. That’s more than you can say for Panik, Man Shitter, or Rasmussen (and really Danault of late).

-The Stars and Blues both lost, so it’s as you were with one game less on the schedule.

-We’ll have a full breakdown of the Ladd trade tomorrow, but obviously it can’t possibly hurt. At worst, it slots Shaw down and gives the Hawks three lines and when Kruger returns four. Ladd isn’t going to let anyone down wherever he skates and he can help out on a kill that needs it. The draft pick won’t matter to the Hawks for another three or four years, and Marko Dano had already soured everyone (though I would have liked to see how he looked on the right side or at center just once). It could work out much better than that obviously, depending on if Ladd can mesh with Toews instantly.

The problem is that he doesn’t play defense. But maybe the Hawks are working on that too.