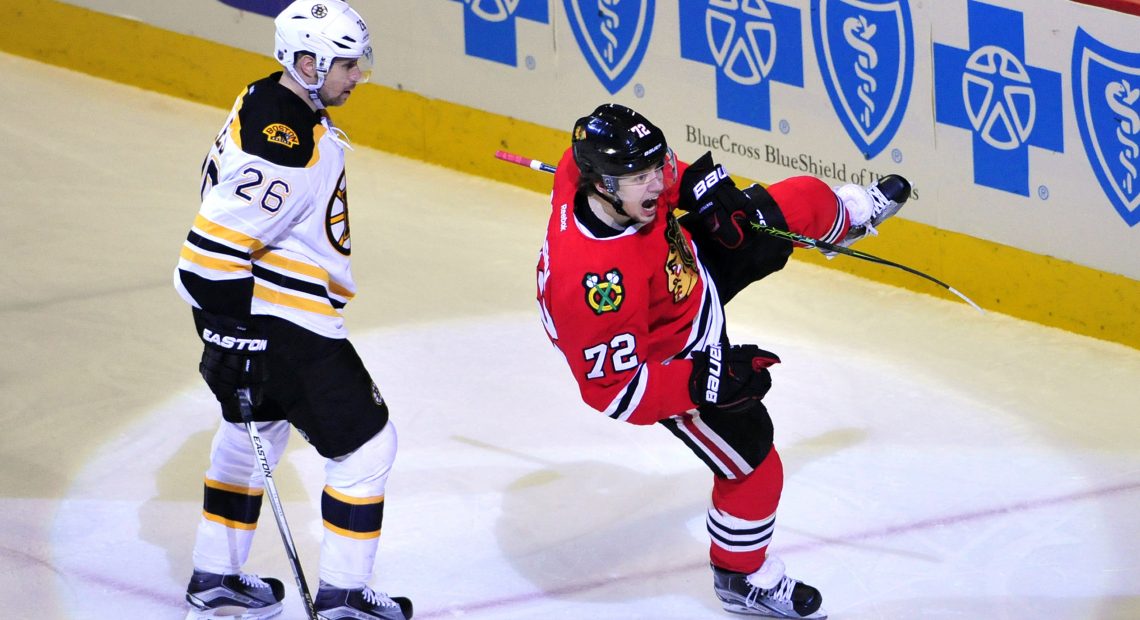 If you peel away the layers in a game that featured one team scored six unanswered goals followed by another team scoring four unanswered, there were a couple truths that we probably already knew but were incredibly apparent.

–On Boston’s fourth goal, Mashinter’s turnover turned Joel Quenneville’s face a shade of red that may have matched the Hawks sweaters. With the Hawks trying to get a whole sale change and Mashinter only needing to chip the puck off to the side boards to successfully accomplish this, he instead tried to skate his way past the Bruins defenseman.

If someone like Kane or Panarin or even Teuvo makes that mistake, you can sort of live with that as a coach. When it’s a tomato can like Brandon Mashinter, that’s the thing of which spurs heart diseases. And which gets one banished to the bowels of the United Center for the remainder of the playoffs.

–Seabrook and TVR ending up a combined -24 Corsi is probably better than the -50 we could have expected. To be fair, Seabrook did help set up the Hawks final goal with a nice break up of a Bruins 2-on-1 which sparked the Hawks 2-on-1 going the other way.

–I’m curious since this has happened to the Hawks so many times throughout the last 8 years. Would rather them be on the side of team that jumps out to a huge early lead and then hangs on for dear life or the team that falls behind only to stage a dramatic comeback that ultimately ends up short?

They’ve been on the Bruins side of it enough this year that two points are better than none. And style points are effectively meaningless this time of year.

–The Hawks moved within two points of St. Louis with the Blues in action tonight against Colorado who needs at least a point to keep their playoff hopes alive. At this point, I prefer the Hawks just make it into the postseason in one piece rather than worry about getting home ice in the first round or not. Especially when you take into consideration that it’ll be a match of wits between Joel Quenneville and Ken Hitchcock.

But hey, if the home ice is there for the taking, it wouldn’t be awful either.

Enjoy the rest of your day.