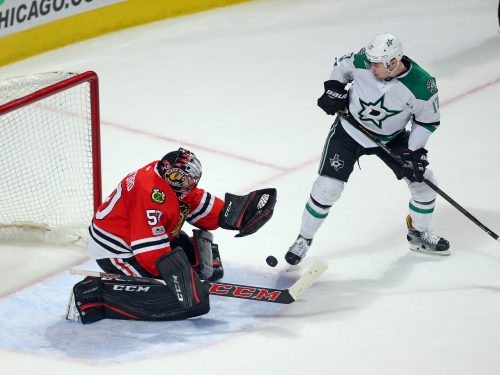 “Well, you tried it just for once found it all right for kicks
But now you found out that it’s a habit that sticks”

For the third game in a row the Hawks couldn’t raise their give-a-fuck level much beyond tepid against one of the products of the league’s sludge factory. And once again they came out of it with points, this time maximum. Only a possible goalie-interference denied them six points out of six from three games that they played as a bar bet. It’s a neat trick if you can pull it off. With the win the Hawks move eight points up on the the Zack Wyldes with nine games to play. They’re almost dormie!

This isn’t one that anybody would use as an example of what the sport can be. The Hawks weren’t bothered, the Stars didn’t seem interested in anything more than getting to the end of the season quicker. It was like an exchange at a 4am bar where the invitation to go home together is out there but the other party realizes they’re too drunk and stupid to do much good if they take it (just me?). The Hawks surrendered 40+ shots again to a team they shouldn’t be doing that against, but we’ll chalk it up to late season, nothing-to-play-for malaise than anything structural or worth worrying about.

As he’s been most of the season, Crawford was able to bail the Hawks out. Because that’s a thing he does.

-The one thing worth watching tonight was Hartman as a center, and it went just about as you feared as that line couldn’t even crack a 40%-share. Schmaltz took some shifts at center there, too, and I wonder how much more of this will be seeing. Hartman is at his best being first in the zone and getting on defensemen down low on the forecheck. You kind of rob him of that asking him to be the last forward out of his zone. We’ll see how deeply Q wants to ride this experiment in Florida.

-Though giving Hossa a playmaker on his other wing sure worked out, eh?

-The usual shot-allergic Ales Hemsky had seven shots on goal tonight. I’d like to think the Hawks really were making wagers before the game on things like that. “Hey tonight. let’s see if we can turn Hemsky too shoosty and still win.” Mission accomplished then.

-Another positive is Keith was on the heavy plus side in possession, which is one of the few things left watching this season. He did that while having to see the Benn-Eakin-Hemsky line most of the night, and of course Hemsky scored twice so it’s not completely free and clear. He might have been helped for the first goal if Kane didn’t F-15 it out of the zone a touch early, giving Klingberg and Hemsky all the space in the world.

-On the downside, Oduya and Seabrook got skulled again dealing with Elie-Seguin-Ritchie as that’s the matchup they were given. This is our concern, dude.

No matter. Minny loses, another day off the calendar, trip to Florida and then Pittsburgh. The latter two games will see teams with something to play for so that should be interesting.