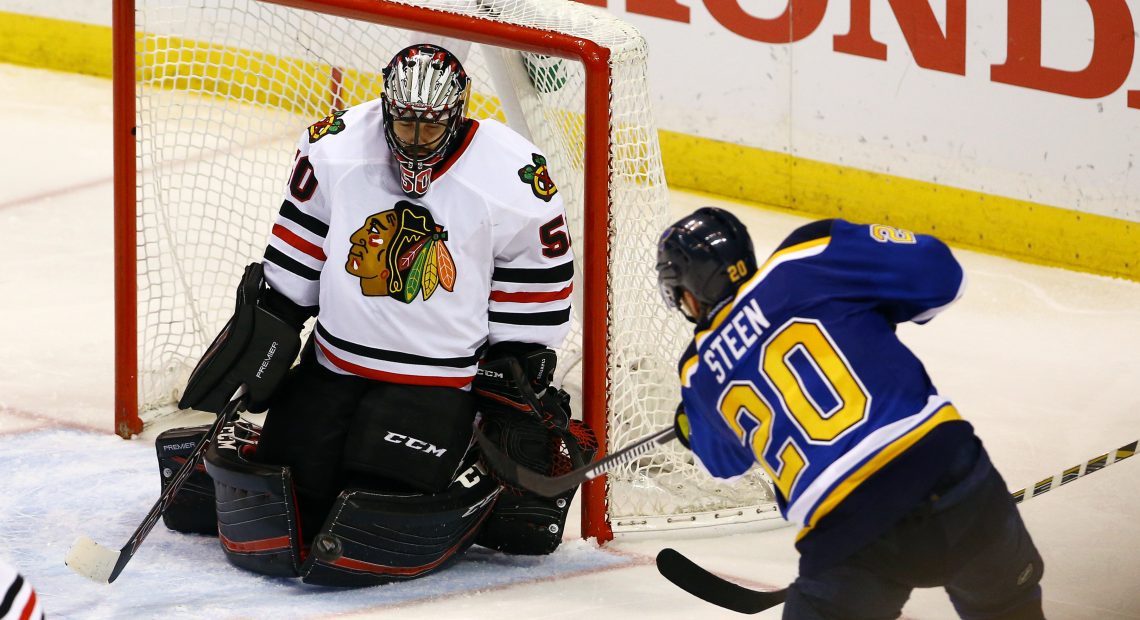 When this thing eventually runs out of gas, I hope everyone truly appreciates how far Corey Crawford has carried these cast of clowns this year. Much like they’ve done all season, the Hawks were absolutely buried by the opposition and gave up a barrage of shots. SPOILER ALERT: Crawford kept the Hawks in it while they weathered the storm of St. Louis looking to close it out quickly.

This allowed the Hawks to settle into the game while simultaneously draining the energy from St. Louis. You see, throwing two guys on the forecheck is all fun and games but if there’s nothing to show for it, it’s very easy to get fatigued quickly. (Which is why teams are usually only able to play this way for a period at a time and would also explain why the Blues had 22 hits in the first period and only finished with 39. Also, they had the puck way more but that’s beside the point)

So it shouldn’t have been too surprising when the Hawks exited the 2nd period with a 3-1 lead. Hossa finally broke through with a rocket. The Brian Elliott train started to derail and Kane and Panarin combined for a beauty at the buzzer.

Then…well, St. Louis came with their push. And much like we’ve been accustomed to, Nacho Seabre just couldn’t keep up. Robby Fabbri or Robbi Fabbry spun him right round, round for the second goal. Then on the third Blues goal, he couldn’t clear the puck and then lost a battle in the corner which led to the tying goal.

Right about this point, the Hawks seemed resigned to their fate (No, no, no, don’t crap me) and obliged by taking a too many men penalty with about four minutes in regulation. Corey Crawford was there again to drag them through to the finish line, making several point blank saves.

In the majority of the first overtime, it was much of the same. The Hawks looked completely exhausted and appeared to be cool with starting the offseason tonight. Crawford, once again, had other ideas. Save after save, he pushed the Blues back even when it looked like he was just delaying the inevitable.

Finally, towards the end of the first overtime the Hawks started to get extended zone time. They carried it through the second overtime and Dick Panik found Patrick Kane in the high slot. Kane did Kane things and Brian Elliott tried to blame goalie interference on Jabe O’Meester.

–Other than the overtime goal, Kane did not have his greatest game. He looked all out of sorts at times. In the first period, he was unable to connect with Duncan Keith on a wide open neutral zone pass with no pressure. Really, the whole series he’s looked mildly interested. Not sure if it’s from fatigue from a regular season which saw him press for 100 points or what, but he hasn’t looked like his normal self for a bit. Maybe this goal will change his fortunes around.

–The pass he made to Panarin, though, and subsequent shot was a thing. You will notice, however, on this tweet below that Alex Pietrangelo has his stick in a lane where three of his teammates are standing. Meanwhile, the passing lane to Panarin is wiiiiiiide open.

That pass. That finish. #Teamworkpic.twitter.com/SKOGa8tiU3

–Get enough looks and eventually, every goalie is a mere mortal. The Brian Elliott train started to come a little unglued tonight. Anisimov’s goal was probably one that gets stopped in Games 1-4. Same with Hossa’s. The longer this series goes, the more likely it is that his true colors start to show through. But we all knew this already.

–The Hawks are essentially Kramer at the end of one of the worst Seinfeld episodes of all time where he sees how far he can drive the car on empty. There is nothing left in the tank. Yet, somehow the car keeps dragging along on the highway; Crawford will continue to bail their ass out and they will find a way to score goals even if they only have 2 defensemen and one line capable of scoring.

–That being said, the Hawks have been here before. Losing three games in a playoff series at the United Center isn’t exactly unchartered waters with this group. In 2012, they won an overtime Game 5 in Phoenix that they had no business winning. A Game 7 seemed inevitable. Then, they came home. Mike Smith withstood a first period barrage and then it was over by the end of the second period.

That, of course, has no bearing on what will happen Saturday. However, it is worth considering while we try to determine just how far the Hawks can continue to extend their season.