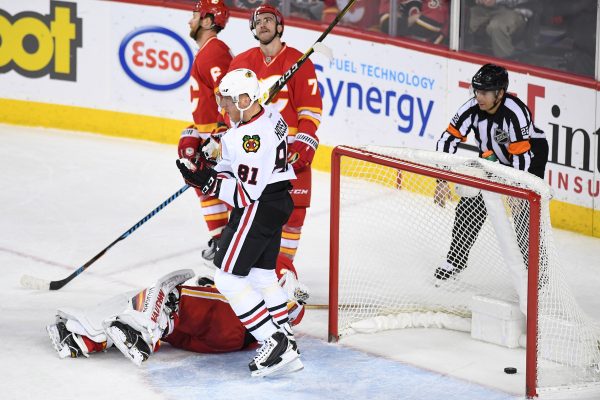 I’m not sure how much more the Hawks will see of it, and there are only a handful of teams with the speed at forward to do it, but the Flames, especially in the first 40, constantly hit their center or a forward streaking right up the middle through the neutral zone, providing easy entry into the Hawks zone. The Hawks D can’t really step up on someone coming up the middle, especially when he’s consistently beating the Hawks forwards up the ice. If they crunch to the middle too much than the wings get open. It’s actually what the Hawks want to do as much as they can. hitting the center with either a short pass from the corner or popping it to the middle from the half boards. Considering the personnel the Hawks have at center right now and the way some of them are playing (HINT), more teams are going to be able to scorch them like that and make them pay a higher price.

-Michal Kempny gets better every game, and is proving a real find. The stat sheet will tell you he went 23-8 in Corsi tonight. He showed something of a snarl tonight, more than we’ve seen, stepping up on occasion to bury a forward trying to clear the Flames zone or around his net. The highest compliment paid was Q going to the main four and he being the fourth along with 2-4-7.

-Fatigue was certainly a part of this one. They were dead even through 40 in attempts before the Hawks took a 21-15 edge in the 3rd.

-I know people get weary of our constant bitching about the broadcast, but tonight was pretty egregious. If you’ve watched the Hawks even semi-consistently the past season and a quarter, you know that after every penalty Quenneville has tossed out Toews between Kane and Pantera. Two years ago it was Sharp. Sometimes in the past it was Hossa. He puts out his three best offensive players to seize the momentum back after a penalty. I don’t know where they’ve been, but a spotter is supposed to be whispering that in their ear. Then again, this being CSN I’m going to go ahead and say that all those in the production booth were just as clueless.

-Hartman, soon to be known as “Hartamania” around here, had another strong game, showing good strength to keep Big Money Wides muscled off on his partial breakaway and the vision to go top shelf. I wonder if he looks so lively because he’s playing on every line but with Pantera, where there’s a lot of dead ass.

-The winning goal is an excellent example of why a challenge system, in any sport, is dumb. I don’t know if a review would have determined goaltender interference or not. But I know it should have been reviewed. But because the Flames had iced the puck once earlier in the third they couldn’t challenge. That’s ridiculous. The game’s arbitration should not be determined by what the teams have and don’t have. Get a fucking fifth official in the pressbox and let him buzz down when he thinks there’s something worth looking at.

-It’s time to say it. Toews needs to pick it the fuck up. Tonight, when out against Monahan he got crushed in attempts 16-4. Monahan and others have done this to him before. He’s got eight even-strength points this year. Three even-strength goals. That’s not going to get it done. He goes shifts where you don’t even know he’s there. His xGF%, not a tell-all but at least weighing not just the amount of chances but the quality, was 41% coming into this. Crawford is bailing him out or it would look a lot worse. I don’t know what the problem exactly is, but the Hawks and Toews are going to need to figure it out and somewhat sharpish. Crawford can’t keep up a .950 SV% at evens forever.

-Still, playing the woebegone Canucks and a slumping Oilers team should see the Hawks with an excellent chance to get out of Canada with a good record before the California Songs portion of the trip.