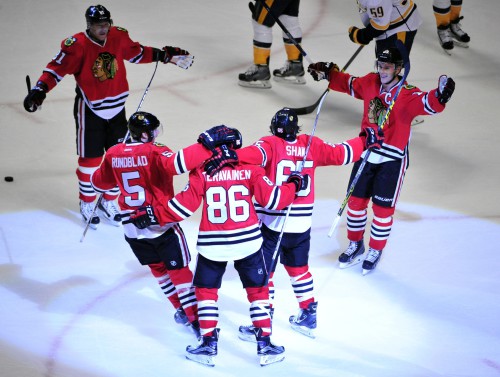 One or two more and this could a habit! Anyway, sorry for the delayed wrap. A flat tire cost me the urge to do it last night. I need that Bond auto-inflate tire from Tomorrow Never Dies. Or all of them. All those cars probably had that feature. Anyway…

The Hawks once again got a win with their do-it-all second line merely adding an empty-netter, though they were the best on line on the ice for either team most of the night. Unlike Sunday’s win though, this one is thoroughly pinned on Corey Crawford, who might have had his best game of the year. And not only that, he made it look easy at times. Without him, this probably looks a lot different.

The Hawks got goals from other lines as well, if you can believe that, to keep the spiraling Preds… well, in a spiral. Downwards. Though it is possible to spiral upwards. But we rarely use that term for that motion. Whatever. Let’s get to it:

-It was a week ago that friend of the program Jay Zawaski was wondering allowed if Crow was hurt as he looked sluggish moving in his crease, and I wondered with him. So it’s good to see the Fels Motherfuck is contagious. Crow was as athletic and smooth as he has in a while, making a couple post-to-post saves where he easily beat the puck to the other side and was waiting. One in particular on Ellis in the 2nd stood out, and of course there were the multiple partial and full breakaways he had to stop. Only time he was beat clean was by Wilson in the 3rd who got to wind up from between the circles and hit the post.

-So it’s probably worth pointing out just how many times the Preds were able to get behind the Hawks for those breakaways or clean looks. I counted four or five at least. We know this is a fast team that wants to go go go, and if Keith wasn’t out there the Hawks’ defense was struggling to adapt. If the Preds had any actual forwards right now, this might have been a huge problem.

-Teuvo’s two goals and one assist the past two games have come from his off-side. It feels like this shouldn’t be too hard to learn. Whenever Q breaks up the top line again, and you know he will, he should consult his notes about this. Teuvo is simply better over there, either as a right wing or a center that ends up there. This really isn’t so difficult, only made that way because the Hawks have no one else who can play the left side on that line.

-Roman Josi… yeah, that’s the real deal right there. It’s funny, Shea Weber is sincerely the third best d-man on that team. I’m not even sure it’s close. Because as I thought, and seeing it live proved it, Seth Jones is simply carrying Barret Jackman every night. That should make him a Norris finalist alone.

-That’s what’s such a tease about Andrew Shaw. There really aren’t that many bottom six forwards who can adjust their body and hands quickly the way Shaw did on Teuvo’s pass to get off a good shot on which he scored in the 2nd. Most would probably fall over if they tried it. Now if you didn’t have to wait every couple of months to see it amongst a waterfall of bad penalties and bad positioning, we might have something there.

-Having been to my first game of the year tonight, I still don’t see Toews’s shifts popping like I’m accustomed. When you’re in the arena, you know when Toews is on the ice. Last night, I didn’t really. Toews actually struggled against Jarnkrok Over The Line, Sweet Jesus’s line, but tore up Ribeiro’s according to the matchup sheet on War On Ice.

-600 points in 604 games. To me, that’s far more impressive than his scoring streak, which is really impressive. All this for a short winger who some didn’t want taken over Kyle Turris or James van Riemsdyk. Kane even missed the power play happy season right out of the lockout, so he’s been a point per game player over 8+ seasons now in an NHL where that’s nearly impossible to do.

-This Preds team sounds like it could fall apart at any moment. 3-5-2 in their last 10 is obviously an issue, and it couldn’t be clearer they need a trade for help down the middle. They can’t keep going at teams in the West with Jarnkrok Over The Line-Mikey Ribs The “Predator”-and whenever Mike Fisher is healthy. This is the best blue line in the league they’re wasting. And Pekka Rinne being back is something they can’t cure by trade. While the Hawks have taken a step back this year, it looks more and more like there aren’t any teams stepping up into the void unless you’re a Dallas Stars believer. And if you are, the other writers on this blog yell at you a lot. Believe me, I know.