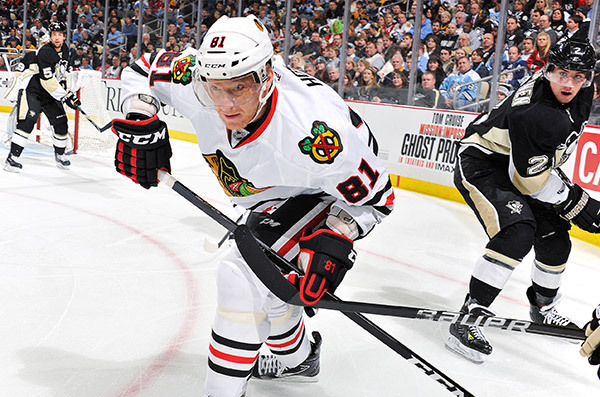 For the better part of this season, especially lately, we’ve been trying to sound something like alarm bells at the struggles of the Hawks at even-strength. And that’s a big deal, because you can’t be considered a very good team or have prospects of going all that far in the spring if you’re doing so on the back of special teams (unless you’re the ’06 Hurricanes). And the Hawks are a middling, at best, even-strength team right now. They have a -8 goal-difference at 5-on-5. The teams around them? The Flyers are just behind and the Maple Leafs are just ahead. That’s the seat on the bus between with the guy coughing up a lung and the woman yelling out Kentucky Derby winners randomly from the past 35 years (stick tap to friend Brendan McGowan for that line. Follow him at @BMGComedy). Their score adjusted Corsi-rate of 52.0 is solid, as is their Scoring-Chance rate. But their high-danger scoring chance rate is basically an even split of 50%, placing them 14th in the league. Again, middling.

A lot of this I’ve and we’ve laid at the feet of Jonathan Toews and his eight even-strength points this year. Maybe it’s time we look to his right a bit.

Marian Hossa has five even-strength points this year. More worryingly, his rates and numbers are decreasing across the board and this isn’t the first time that’s happened. Hossa’s Corsi-share is still a very good 53.7. But that’s down from 55.1 last year, and 57.2 the year before. The lockout year it was a simply insane 60.2 (the more and more you look at that 48-game season you realize we’ll probably never see a team play at that level again). Hossa didn’t really have anywhere to go from the heights he hit, but he’s definitely coming down the mountain, Perry Farrell.

High danger chances have actually stayed at the same rate, 0.86 per game this year from 0.82 last year.

It’s kind of going that way at the other end too. Hossa’s Corsi-against per 60 has gone from 39.7 to 44.6 to 48.8 to 49.3 this season. The shots-against have risen from 22.7 per 60 three seasons ago to 28.5 against. And all of this while his competition has remained steady and his zone starts as well. If anything he’s starting more shifts in the offensive zone.

Beyond the numbers, everyone here knows what a true Marian Hossa shift looks like. It’s basically he’ll have the puck as long as he wants it. While there are flashes on the backcheck or on the rush or occasionally in the corners, you just don’t see it as much. There isn’t a pop to his shifts, much like Toews this year.

It would be hard to blame Hossa. He’s 36 after all and eventually the mileage catches up (did you notice Jarome Iginla at all last night?) Hossa has never molded his game as he aged to something of a one-dimensional sniper like Iginal did or Sharp is currently doing, and I don’t even know that he’d be that good at it anyway. Hossa’s game was high-impact and highly physical, with defenders draped on his back and swatting at him since he came into the league. The legs can only take so much.

I was talking with Chris Block on Friday at the United Center, and he was remarking on how much Toews has to be the first forward into the offensive zone now with Saad gone. And that’s after Toews has his defensive responsibilities to deal with. I’ve watched the past couple games for that specifically. Hossa just doesn’t get there that much anymore. It could all be feeding itself between the two.

The scary thing is that Hossa has always tended to fade a bit as the season goes on. Maybe he’s pacing himself this year, but that hasn’t been his M.O. at all. If there aren’t signs of a turnaround in the next month or so, there probably isn’t going to be one.