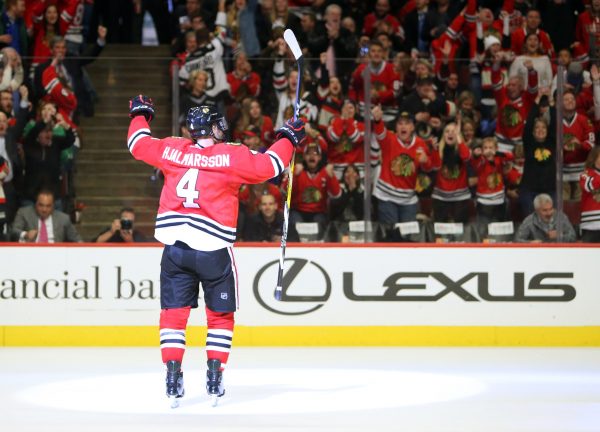 If the Hawks weren’t very good to open the contest against Florida, they decided to see how much more the bottom could fall out and still get out with two wins against the Devils. The opening 10 minutes of tonight’s game might be the worst we’ve seen a patch of hockey from the Hawks in years. They were skating in mud, and not the good Mississippi kind. The Devils were three steps quicker all over the ice and worse yet the Hawks didn’t seem all that bothered to do anything about it.

Then again, I guess you don’t have to care when you know that Corey Crawford is almost never going to let a game get away from you. He did it again tonight, pulling off several saves in the 1st that could have basically ended it. The longer the game went on with the Devils in reach, the more chance it would be that their shoddy defense and a not yet full-strength Schneider would crack. One nifty play from Rasmussen to Kruger and the Hawks were on their way.

And for the second game in a row, they blew a third period lead that they’ll be able to cover up with victory in a post-60 gimmick. That’s not a trend you want to count on, but it’ll work for now.

The Hawks haven’t had a really satisfying win since the St. Louis game, you’d have to say. But in a league where no one really stands out, certainly in the West, a team that isn’t very impressive yet can stand on top. This is the way they wanted it, and they’re getting it good and hard.

-While the numbers and stats say Duncan Keith was the normal dominant self, the eye-test showed a Keith who looked sluggish, turnover prone, and a little weaker along the wall than we are used to. That helped the first period go so wrong, and what helped get the Devils back into it in the 3rd. It was Keith who was easily beaten below the goal line by Palmieri and turned the puck over to Cammalleri. That wasn’t the first time that happened tonight.

Keith has been very up and down this season, and it can’t all be pinned on playing with Campbell. While their pairing is different and a little bit awkward, both are wily enough that it should work better than it has. Maybe he’s pacing himself, maybe tonight he was feeling the effects of going for 32 minutes on Tuesday, maybe he’s just not going to be quite the same after the knee injury. Let’s hope it’s not the latter.

-Kruger’s job isn’t to score, but every so often he rips off a wrister like that and you wonder where it comes from. Hopefully George McPhee wasn’t watching and getting any ideas about taking him away in June.

-Campbell also looked much better with Seabrook, charging up and down the ice in a way he’s been reluctant to most of the season. He knows where Seabrook will be, though.

-When the SuperPAK line gives up the puck, they give up some Grade A chances most of the time. With no Toews, it should have been more disastrous. Only thanks to Crow has it not been. Panarin can do more than wait along the boards to whip a cross-ice pass to Kane, which he does far too much when playing with him.

-Who knew Rasmussen had those hands?

-Good lord are the Devils a mess defensively. The game was nearly over from Campbell’s canceled out goal because they simply let Wiener Anxiety to march down the middle of the ice all alone.

I feel like we’ve said this for three straight years now. The Hawks are winning while not playing well. So either they’re going to improve and really go on a mud-stomp, or their results are going to start matching their performances. That’s the scary part.