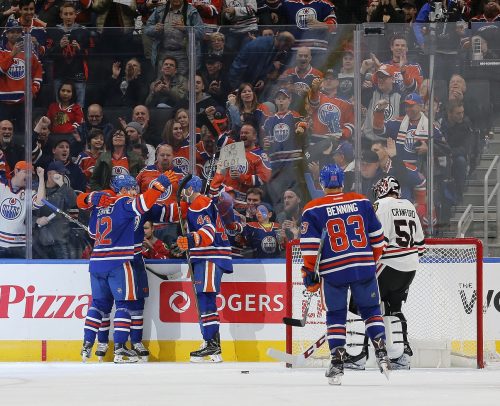 Well it wasn’t the Sam Gagner game. But it was probably the worst game the Hawks have suffered through in EdMo since then. That said, the Hawks put up 18 shots in the 2nd period and 28 in through 40, so to say they were completely dominated is just wide of the mark. However, the other team applied the formula the Hawks had been through most of the season. Convert on the power play, have your big stars punch through when they get an opportunity, have your goalie stand tall during a deluge. The Oilers did all that, thanks to McDavid, Klefbom, Draisaitl, and Cam and Magic Talbot. The Hawks didn’t do any of it. This is what you get.

It is pretty startling, when McJesus is on the ice, how the math changes for everyone watching. Loose pucks that you assume the defense will gather up are now not just contested but he gets. Chips out to center from the defensive zone are now basically deep balls to Randy Moss. It’s not just his straight-ahead speed either. Especially on the power play, his quickness with the puck in tight space is something to behold. We saw McDavid attempt the same curls and movement that Kane does on the power play from the right half-wall, but he’s doing it at three times the speed. He gets and opens up lanes faster than anyone I’ve ever seen.

It doesn’t always work. He runs into checkers and the wall faster than anyone has, too. But he’ll get that figured out.

-There are going to be nights when the Oilers are going to do this to other good teams. And there are going to be nights when they have this done to them by bad teams. They still look in between a lot, caught whether to try and spring out of the zone, wait for turnovers, chase the puck, or man their spots. But when the puck is jarred loose they are full out and it can be scary. Rarely do you see the Hawks d-men backing up off the points as quickly as they did tonight and forgoing a chance to hold a puck in. Because if you miss it’s over. Any misplay, with the Oilers on song, and it’s a 2-on-1.

-That said, the only line they had in the positive in terms of attempts was the Maroon-RNH-Eberle line, and Eberle is the most guilty of all, now that Yakupov is gone, of wanting to wind up on every breakout and try and beat three guys. There’s still a lot of unearned showtime to their game, and they’ll have to sort that out.

-No surprise that team this fast was giving Seabrook fits tonight, but he’s hardly alone in that club. And even with that, he was a 62% Corsi.

-Crow will want Slepyshev’s goal back, and maybe Klefbom’s opener. But Klefbom got a shot from the circle, and the others were screened.

-We all thought it would be a big, heavy team that would make Gustav Forsling look like the rookie he is. Turns out it was just a track team that did it. Learning experience.

So the Hawks split the Canada portion of the trip, which is only slightly less than you would have taken. But they’ll take it considering they maybe played three good periods out of the six against Calgary and Vancouver and they got four points. They deservedly got fed in Winnipeg, and tonight was just one of those. Two of three in California would make for a successful trip, and none of those three teams are lighting the world on fire.