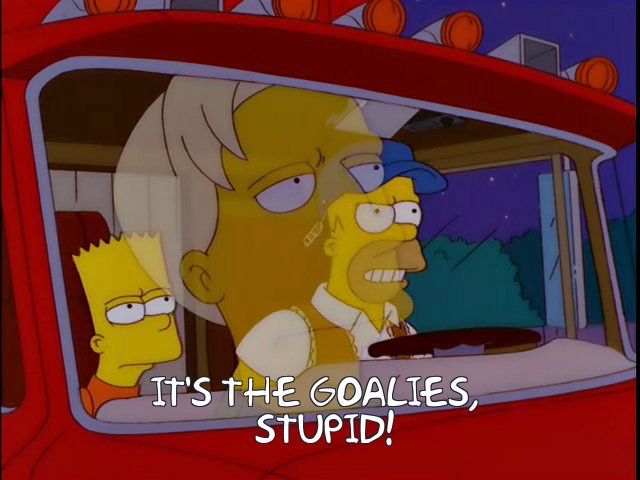 Sometimes this hockey thing is silly and simple. Now that this series is going to a seventh game the story out of it will be how evenly it’s been played and how it could have gone either way. And on the surface, that’s true. This series could well be decided tomorrow night on a high-sticking call or another offside review or some goal that goes in off Tyler Johnson’s ass (again). By definition these are all coin-flips.

But in reality, the Penguins have spent a great majority of this series kicking the ever-loving shit out of the Lightning, but Andrei Vasilevskiy has simply held them in.

In games 2-5 the Penguins carried a 58.3 score-adjusted CF%. That’s utter domination. In the first two periods last night, where they piled up a three-goal lead, they were just a touch under 60%. Then they went into the Hitchcock shell and nearly biffed the whole damn thing, because coaches have yet to understand that just sitting on a lead against a team that carries a decent level of weaponry like the Bolts is just not the way to go about it. As McClure has pointed out all series, it’s almost like the Penguins are laced with speed at forward and the Tampa blue line behind Hedman utterly sucks. But Garrison piles in a couple OT goals and suddenly no one bothers to notice this is a problem. No, let’s talk about how Sidney Crosby sucks some more. That’ll show ’em.

There isn’t really anything the Penguins could have done to have ended this series earlier. Matt Murray hasn’t been terribly good, a rusty MAF was way worse (who could have seen that coming?), and then going back to Murray provided just enough so as not to ruin all the good work that the Penguins forwards are doing.

Vasilevskiy could steal it tomorrow of course. He’s shown that he’s more than capable. If he does it’ll cause a raft of articles about what’s wrong with the Penguins (it’s their defense too, kids) when in the end they won’t have done too much wrong in this series. The few chances they do give up in comparison to the ones they get are pretty prime because of that defense, but they’re still getting way more than the Bolts. As long as they continue to attack the Four Horsemen Of The Slow-acalypse Garrison, Carle, Sustr, and Coburn with their speed, they’re more likely to move on than they’re not.

Well Blues Twitter is hitting all the desperate notes today, as the Blues face elimination for a third time this postseason but the first time it’s not a Game 7. “Don’t give up” “They’ve been fighting all season” and on and on and on. Beginning to sound like the whelp of a beaten cur.

Their goalie shuffle didn’t really work either, and it’s kind of the same story it’s always been with the Blues. Other than their Game 4 explosion, the Blues have five goals in the other four games. Vlasic has wiped Tarasenko off the map and when you’re counting on only Troy Brouwer to make up the difference, bad things go happen.

If Hitch wants to keep the Blues in this series, and seeing as how not taking a penalty is an utter impossibility, he’ll jump Tarasenko around the lineup tonight. Keeping him with his normal linemates on the road is going to make it too simple to just send Vlasic and Braun out there every time to do the thing. While you don’t want players trying to find chemistry in what could be the last game of your season, there is no other choice. If only it frees up Robby Fabbri (or Robbi Fabbry) to face easier competition, that’s probably worth it.

Then again, it’s not going to matter if the Sharks are getting multiple PP looks. While we always say playoff series are decided at even-strength, the Sharks are the exception that proves the rule. Your power play has to be this good to be a deciding factor.

This is the first time the Sharks have the chance to win to get to the Final, so let’s not rule out a full body dry heave from them either. It would certainly fit their persona. But other than Game 4 in this series Jones has been awfully good at home and if Hitch doesn’t make Deboer think and Vlasic continues to clean Tarasenko’s name off any documentation anywhere, the Teal is going to play for the Cup.