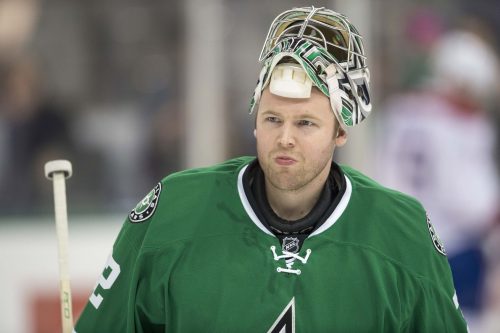 As we said yesterday, the Stars are at more of a crossroads now than it first appears. Goligoski is a free agent. So is Jason Demers. Johnny Oduya is getting old. Jason Spezza is too. So’s Ales Hemsky. Sure, Janmark and Eakin can probably take up the slack of whatever Spezza loses off his fastball, but that blue line is going to need some work. And they’ve got $10 million of worthless goalie they have to figure out what to do with. They can buy out one, but they can’t find a starter for cheap with the money they’re going to have available. And teams aren’t going to come running to pay either Lehtonen or Niemi. They’re going to be eating salary here.

It can be done, and there’s on reason to think the Stars will be significantly worse next season. If they can find a partner for Klingberg (I’m not convinced it’s Goligoski) and Johns continues to develop alongside Oduya, they’ll have a top four that few teams can match. But getting the math to work is the trick.

For the Blues, I guess we have to say this year is different. Sure, it helps when you play a team with a perforated blow up doll in net, but that’s not their fault. They didn’t buckle, even when the Stars did charge to begin the 2nd and it was still a game. Whatever’s next is probably their stiffest test yet, but they’re hard to predict now. I still think either of Deboer or Laviolette will pants Hitch over a series, but that’s not a guarantee anymore.

The last dance card in the conference finals gets filled tonight. Will it be a seventh home win or will a road team finally break through?

It’s kind of the same story as the Blues and Stars heading into this Game 7. Martin Jones has rarely put back-to-back bad performances together, and he’s coming off kind of a clanger in Game 6. He’s been far better at home. Rinne is coming off a good performance, even if he did end up facing the wrong way a lot. He hasn’t been that good on the road in this series.

Other than Game 2, the Sharks have been good value for their three home wins. Tonight will probably see DeBoer get Thornton and Pavelski away from Weber and Josi, who rolled them in Game 6. He’ll probably be targeting Ellis and Ekholm, who have had serious defensive issues all series. The Sharks let the Preds’ top line off the leash last out, with Johansen and Wilson getting on the scoresheet. That’s less than optimal, but I think the Sharks have just a little more. Unless something weird happens, which it will because HOCKEY.