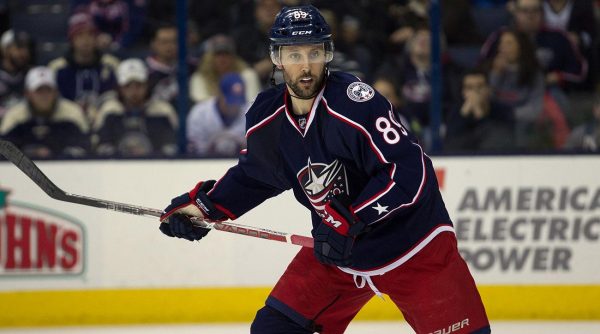 Before we delve into whether or not Sam Gagner would be a good pickup for the Hawks–they’re apparently batting their eyelashes at each other from across the free agency bar (that’s what people do when they’re attracted to each other, right? I really have no idea), we should let rip on Bill Daly and the NHL.

First off, let me say that I’m still somewhat surprised that Bill Daly remembers how to breathe throughout a particular day, given the powers of his mind. Today he came out and said the NHL still has not ruled on what Marian Hossa’s cap status or injury status or just status will be. I cannot, with every writing skill I’d like to think I have, express how universally stupid this is.

First off, it’s completely unfair. The Hawks need to know if they can put Hossa on LTIR in training camp or not. Otherwise they have no idea what they can sign this summer and where they have to be when camp opens.

And really… there’s no “ruling” to be made here. Chris Pronger played his last game in October of 2011. He remained on the Flyers books for four more seasons before his carcass was… well, he wasn’t even shipped to Arizona. His contract was. He remained wherever he is now.

Marc Savard missed most of the ’10-’11 season thanks to Matt Cooke, and remained on the Bruins books for another four seasons. There is precedent for this, and whether the NHL likes it or not it simply can’t change the rules as we go along simply because they don’t like that they couldn’t figure out how teams would get around the dumbass rules they set up in the first place.

Simply because of timing of this, or the fact that Hossa has been dealing with it for a couple seasons, that doesn’t mean the rules change. He hasn’t retired. Would they be having this debate if he caught mono? No, of course they wouldn’t. The NHL wants to talk tough about it for some reason, maybe because everyone else is bitching and they don’t want to appear to just roll over for belly-tickling for the Hawks. But this is ridiculous, and I have to assume the Hawks themselves have some kind of word how this is going to go.

-Anyway, Sam Gagner. The rumors have been circling for a couple days, and I’m just going to take credit for it because I thought of it, tweeted it, and clearly both Gagner’s agent and the Hawks were like, “That Sam fellow is onto something. And charming! And handsome!”

If you can believe it, Gagner has been in the league ten years now. And he’s usually viewed through the prism of never quite living up to his #6 overall pick in the same draft as Scumbag going #1. That doesn’t mean he hasn’t been a productive NHL player. Seven of his ten seasons have seen him collect 40+ points, and last year it was a career-high with 50. There was also a nearly point-per-game season during the season-in-a-can of 2013 with 38 in 48.

His underlying numbers the past three seasons are also excellent, even if his time in Arizona and Philly are considered complete failures. He was +4.8 CF% in Arizona, +1.6 in Philly, and +5.8% last year in Ohio.

And last year is where he settled into the role that he’s best suited. He’s not a center anymore, and never really was. He skated on a fourth line most nights with FartSmell and something called Lucas Sedlak, and they kicked around most 4th lines they saw on most nights. Gagner would then get on the power play for the Jackets, where he racked up eight of his 18 goals and 10 of his 32 assists.

So if the Hawks are signing Gagner, or at least pursuing him, to station him on a wing with say Schmaltz or Hinostroza on the bottom six to give the bottom of the roster some dash, and then park him on the second power play unit, that’s the best way to maximize his value. If they’re under the impression that he can somehow be a top-six winger again, then everyone is in for disappointment. Maybe they have images dancing in their head of recapturing the magic of Kane-Gagner in London from 2006. But as we all know, you can’t recapture the things you did when you were 18. Gagner can moonlight up there when injuries or a jump is needed, but that’s about it.

The problem of course is price. Gagner went from a $4.8M hit to the league minimum last year, and players who just put up 50 points don’t re-sign for the league minimum. In a thin free agent pool, you could argue that Gagner is the third or fourth most attractive winger out there. Finding comps is a little tricky. Jakob Silfverberg put up 48 points last year and made 3.7M. Alex Steen put up 50 as well as is north of $4m. Jordan Eberle is in there as well.

Quite frankly, the Hawks can’t get north of $3m for him to be on the bottom six, and Gagner can get more than that easily. So it’s really going to come down just how much he wants to be here and what he’s willing to give up to do it.

And how much he wants to fill Fifth Feather’s heart with joy.

Have you bought my book yet? You should. All the cooler heads are. Get it here.