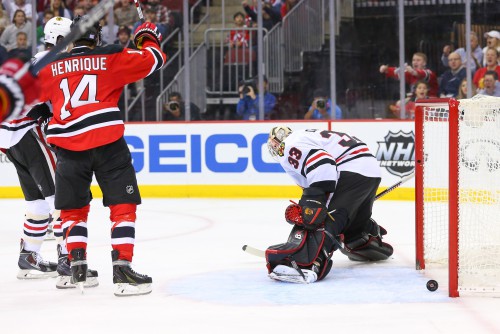 While the first few games without Keith didn’t show what the Hawks would be missing, the last couple have. Starting with the Blues in the 2nd period and pretty much all night last night until the game was out of hand, the Hawks are seeing a “Predators” model. That is, when the puck is in the Hawks’ zone and the Hawks are even attempting to get out, the opposing d-men are sitting right at the line. The Preds did this because their defense had enough speed to catch up to whatever’s behind them. The Blues and Devils did this because the Hawks simply can’t get behind them. With the forwards dropping deeper to help out the defense (count how many times you see all three forwards below the circles tomorrow night), there’s no one to stretch the defense on either side. Even if there was, opponents have figured out there’s only one guy who can hit that pass, and that’s Seabrook. And he’s a little too busy throwing Svedberg a floatation device behind his own net. The Hawks’ speed through the neutral zone is blunted before it even gets started.

Not every team can do this, as you have to have quick and dedicated forwards (which is why the Hawks looked better against the Kings. They don’t really have that much quickness up front outside of Carter’s line). The Hawks don’t have anyone other than Daley right now who can skate out of it, which is why he’s looked better the past few games. It’s kind of relative.

There isn’t a fix to this. At least not now. Gustafsson has shown flashes of being that guy too, but most of his good work has come when the Hawks are already established in the offensive zone. Daley hasn’t earned enough trust to garner a top four role, but I bet Seabrook is looking longingly at him now.

That’s not the only problem of course. The Hawks have really young forwards whose ups and downs are going to be far more pronounced than their veteran teammates. Panarin hasn’t scored in 11. Kero and Dano have barely been here. Anisimov got hurt. They’re actually counting on CatButt for offense.

This isn’t anything the Hawks can’t overcome, but it just isn’t going to be pretty until they do.

-Seabrook and Svedberg got their heads kicked in possession wise, and that’s the fourth time in the last five that’s been the case. There’s just no feet here, and Svedberg for being tree-sized can get knocked on his ass fairly easily and that’s going to be on the scouting reports now. I look at him and see Kjell Samuelsson. Or I see Hawks fans turning on a player who doesn’t play to his size. You’ve seen it before.

-Boy that Toews fight sure turned the momentum. At least he knows it.

-When Anisimov went down, it was Shaw who moved to center because of course, instead of Teuvo. The numbers were positive but most wracked up when the Devils were simply protecting a big lead.

-Hjalmarsson and TVR managed a 30% Corsi last night. Woof-tastic. And most of it didn’t come against the Devils’ top line. When Jiri Tlusty and Kyle Palmieri are feeding it to you…

-You can see Panarin thinking out there now. Hesitating to try and make the perfect play, whether it’s a pass that’s not there or trying to pick out the corners. It’s not coming naturally to him, which is understandable given his first slump of his NHL career.

-Crow goes through this a couple times a year, which sends the unwashed into orbit. I’d look for Darling on Sunday, giving Crow nearly a full week off before Thursday’s return date with the Devils. And he’ll probably be fine after that.

-For the first time on the broadcast and postgame last night you heard, well, not alarm bells, but instructions to keep the radar on the standings. It’s a bit early for that, though the Suicide Squad nature of the Central Division makes things a little more uneasy. Still, the Hawks would have to stumble before the Circus Trip and then that would have to become a total disaster for anyone to really start worrying. The Hawks had 21 points before embarking on that trip last year. They could, and probably should, go into this one with no less than 19. And that trip really only has two good teams on it in Anaheim and LA. EdMo twice, Calgary twice, NJ again, Vancouver and San Jose are both middling at best (the Sharks just coughed it to the Jackets at home for fuck’s sake). Even with that Blues game a week from today, I would say only a 3-6 or 2-7 record in the next nine is alarm-worthy. And that’s probably not going to happen.