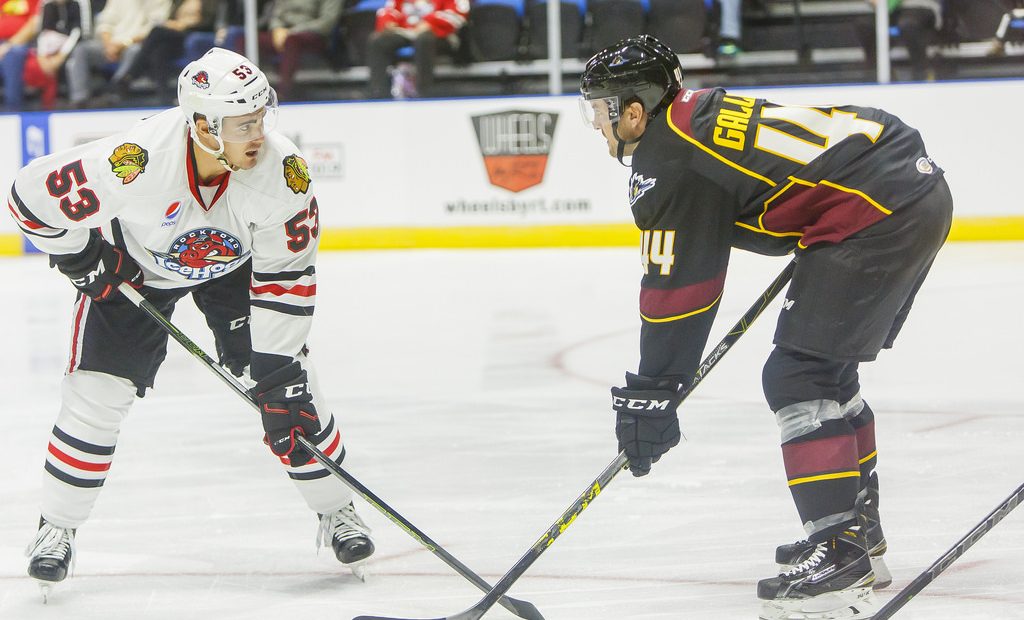 At forward, this is not a lineup packed with prospects. Count Mark McNeill and Tanner Kero in this smallish group. Now, McNeill has led the Hogs in goals in each of the past two seasons. Over a full 76-game schedule could be penciled in for 20-25 goals. Kero is always around the puck in the offensive zone and had 20 goals a season ago.

What’s going to be missing, of course, are the points that would have come from players like Ryan Hartman, Tyler Motte, Vinnie Hinostroza and Nick Schmaltz. One of those players (Hinostroza?) could be sent to Rockford when Andrew Desjardins is ready to resume hockey activities. However, a lot of the Hawks young talent will be up helping the NHL club.

It’s usually a score-by-committee at the BMO. Expect a lot of players to be chipping in if the Hogs are to be successful this season. P.C. Labrie and Brandon Mashinter are rugged forwards who can be counted on for around 15 goals each based on their career AHL numbers. Same goes for Tyler Barnes, on an AHL deal with Rockford.

Spencer Abbott left the second game of the season in Cleveland with an apparent wrist injury. He was, however, active in all three games this past week. That’s a good thing, because he is a threat to score goals in bunches.

One player who I’ve been impressed with so far is Martin Lundberg, who comes to the IceHogs via the Swedish Hockey League after the Hawks signed him to a two-way deal. Lundberg has been a responsible two-way forward who has shown some skill with the puck. He could be a difference maker on this squad.

It should also be noted that he is the only IceHogs player to draw a fighting major so far this season. Though it was just an abbreviated bout with Milwaukee’s Felix Girard, Lundberg showed some leadership in locking up.

While I’m giving out credit, I have to say that Kyle Baun has gotten off to a better start this season. He has skated pretty consistently with Lundberg and Jake Dowell. Baun is also getting time on special teams.

Baun has been killing penalties and got a shot on the power play Sunday afternoon, scoring his first goal of the season thanks to a little net front presence. I’m not sure he’s going to be counted on for a lot of scoring, but he is contributing in other areas so far.

Saturday marked the first home game on the Hogs schedule and 5465 fans showed up to the BMO Harris Bank Center to watch Rockford defeat Milwaukee in a shootout.

I’m guessing most of those fans spent some time waiting to get into the BMO due to some new security measures being implemented. Starting this season, only little clear plastic tote bags are going to be allowed upon entrance.

The lines were predictably slow-moving on opening night. Just about the only thing moving slower than those lines was the banner being raised commemorating the partnership between the Hogs and Blackhawks, which was extended for the next five seasons.

The lines were virtually non-existent on Sunday when I arrived for the game. I got there early so as to be sure to obtain one of the 1500 little clear plastic tote bags the team gave away. I can confirm that they are little and clear.

Not only did the power play wake up in Michigan, it provided both goals in the IceHogs first victory of the 2016-17 campaign.

After a scoreless first period, Rockford took the lead ten seconds into their first man advantage of the night. After Griffins forward Evgeny Svechnikov was called for a hook, Mark McNeill won a faceoff at the right dot.

The puck swung over to the stick of Spencer Abbott at the top of the left circle via Tanner Kero and Erik Gustafsson. Taking advantage of McNeill screening Grand Rapids goalie Jared Coreau, Abbott’s wrister found a sense of belonging in the Griffins net 8:28 into the middle stanza.

Neither power play unit could find twine in the first 1:24 of the Hogs second opportunity midway through the third period, so Ted Dent sent out his checking line to take a defensive faceoff. That group went up and down the ice with Grand Rapids before Ville Pokka knocked the puck off of Matt Larito’s stick in the left side of the Hogs zone.

The puck slid out to neutral ice, where Martin Lundberg beat Nathan Paetsch for possession of it. Lundberg skated past the Griffins captain into the offensive zone, got Coreau to commit and fired over his blocker to tuck in his first goal of the season at the 7:35 mark.

Grand Rapids quickly cut the lead to 2-1 on an Anthony Mantha goal with just over ten minutes to play. Lars Johansson, who was voted the game’s First Star, would not let further contributions to the Hogs net and Rockford skated away with the road win.

On the second PP goal, the forwards were Dowell-Baun and Lundberg.

The IceHogs had to survive a perilous session of Gus Macker Time, but survive they did. This one went to penalty shots, with Rockford triumphing by a 2-0 margin.

Neither team scored in the opening period, though the Hogs out shot their opponent 14-6 in the first twenty minutes. The regulation goals all came in a wild second stanza.

Rockford had just finished killing the second of what would be six Admirals power plays in the sixth minute of period two. The catalyst of the scoring play came when Nolan Valleau laid his stick on the ice to stop a pass attempt by Felix Girard in front of the Hogs crease.

Valleau followed up the defensive gem with a well-placed outlet pass to Ville Pokka, who relayed the puck to Mark McNeill coming across the red line. McNeill entered the Milwaukee zone, split the defense and five-holed Mark Visentin. The union of rubber and twine resulted in a 1-0 IceHogs lead at 6:25 of the second period.

The IceHogs forged a two-goal advantage in the 15th minute after Viktor Svedberg dug out a puck in the left corner of the offensive zone. P.C. Labrie backhanded the biscuit out to Carl Dahlstrom, who banged home the one-timer past Visentin 14:20 into the second.

It took nearly 35 minutes of hockey to build the 2-0 lead and just over a minute to lose it. The Ads got on the scoreboard after a mad scramble for the puck led to a Girard goal at the 14:41 mark. At 15:32, Matt White beat Lars Johansson from the right circle, tying the contest at two goals apiece.

Rockford was shorthanded the last 1:09 of regulation and spent 2:51 of the extra session down a man. However, the Hogs were able to fend off Milwaukee to force the shootout. Spencer Abbott opened the proceedings with a goal. Brandon Mashinter came up short before McNeill ended the game with his successful attempt.

Johansson stopped 32 of 34 shots and stonewalled White and Anthony Richard in the shootout, earning first star honors for the second straight night. McNeill was the game’s second star.

Visentin, who is back from his second ankle surgery, signed an AHL deal with Milwaukee and had a solid night in defeat, saving 35 shots and earning third star honors.

The Hogs claimed their third straight win, gaining a measure of revenge over the Monsters, who had beaten Rockford twice in the opening weekend.

Rockford opened the scoring with a power play goal nine minutes into the first period. A shot by Viktor Svedberg from the top of the Cleveland zone wound up glancing off of Kyle Baun in front of the net. The puck sneaked past Monsters goalie Brad Thiessen and settled into the promised land for a 1-0 IceHogs advantage.

Baun got an assist on Rockford’s second goal at the 19:00 mark. Martin Lundberg took Baun’s drop pass just inside the left dot, spun and fired over Thiessen’s glove. The attempt struck the back of the net for Lundberg’s second goal of the season and a 2-0 Rockford lead at the intermission.

The Hogs stretched the lead to three goals with a Spencer Abbott power play strike 4:03 into the middle frame. Although he wasn’t credited with an assist, Rockford goalie Mac Carruth got things moving on the scoring play by nabbing a clearing attempt and sending it post haste to Tanner Kero.

From Kero, the puck went to Luke Johnson and then Abbott, who knows what to do when he has an open look from the slot. The offering found its way under Thiessen’s pad and nestled into the basket to put the IceHogs up 3-0.

Rockford looked to be in total control of this affair, but the Monsters came up with a big push late in the second. Goals by Aaron Palushaj and Daniel Zaar in the final three minutes of the period sent the teams into the locker room with the Hogs lead down to a single goal.

The momentum was all in Cleveland’s favor in the first six minutes of the final period. What turned the tide was a Brandon Mashinter redirect of eErik Gustafsson’s shot from the left point 6:53 of the third. Mashinter’s first of the campaign made it 4-2 Rockford and settled down the home team.

With free Culvers on the line, the sparse Sunday BMO crowd yearned for a hero that could secure a frozen treat for all. That hero was “Custard” Carl Dahlstrom, who sent a clearing attempt into an empty Monsters net with 30 seconds remaining.

Baun, who had a career night with a goal and a helper on the afternoon, was voted the game’s first star. Carruth and Mashinter were second and third stars, respectively.

It will be another three-game weekend for Rockford, starting with a home date with the Chicago Wolves Friday night. The Hogs visit the AllState Arena Saturday before returning to the BMO to take on the Admirals Sunday afternoon.

Follow me @JonFromi on twitter for game updates and whatever Hogs thoughts I can scrape up during the week. 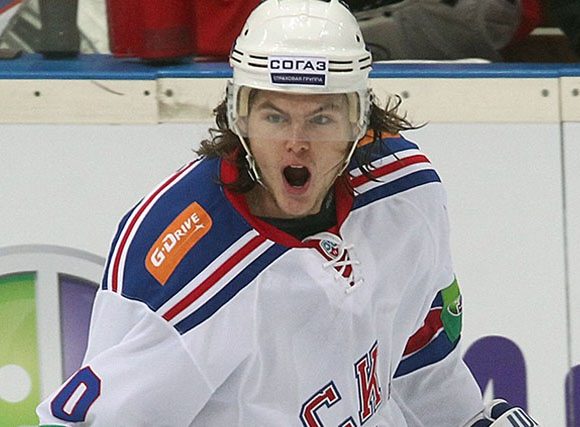