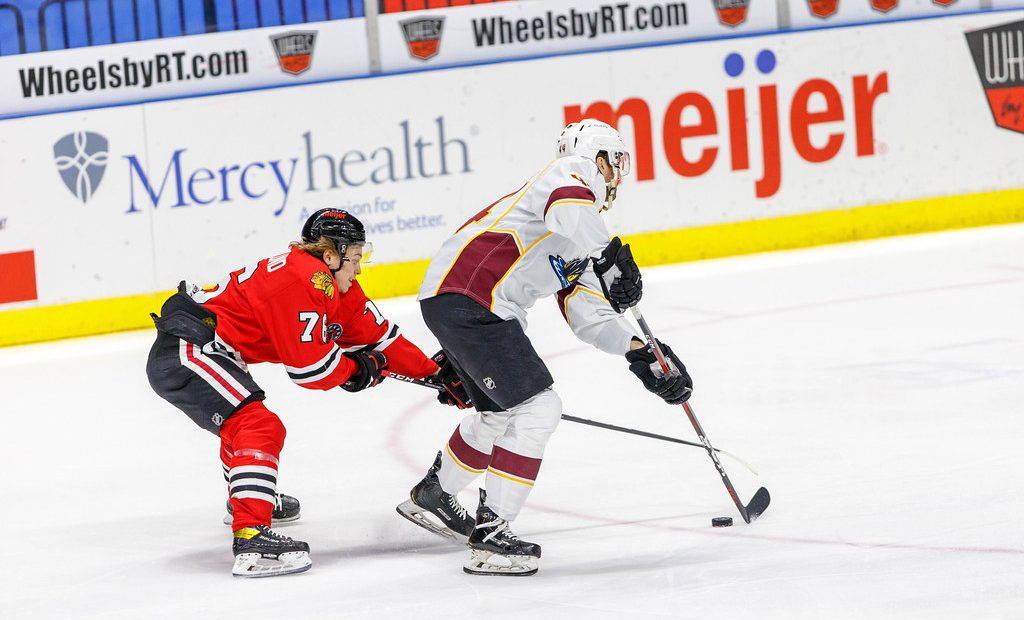 The Rockford IceHogs split the first two games of a four-game set with the Cleveland Monsters Monday and Tuesday. The Hogs picked up their first win of the season on Tuesday, but it came with some measure of concern.

Rockford was blown out in the series opener on Monday. The next night, the IceHogs came out with a different mindset on defense. The normally aggressive piglets sat back and limited shots at close range as best they could, grinding out a 3-2 come from behind victory.

Cale Morris, making his first start after relieving Matt Tomkins the night before, was strong. The rookie make several great stops in his 35-save performance. That said, the IceHogs managed to keep the shots in front of the former Notre Dame goalie, as well as far enough back for him to gauge.

Rockford played the part of counter-puncher Tuesday, hoping that one of their limited chances would find the back of the net. It was a real grind-it-out win; nothing wrong with that.

On the other hand, we’ve spent the last few seasons hearing the organization preaching possession and pace. I’m not sure this year’s Hogs are built to play a slow-down type of game night in and night out.

It was nice to see Rockford get one into the win collum. It may not happen often this season.

The Return Of Sikura The Elder

Last year’s leading scorer and captain, Tyler Sikura, made his return to the BMO with the Monsters this week. Sikura, the MVP of the 2017-18 IceHogs, skated on the top line with Zac Dalpe and Trey Fix-Wolansky for Cleveland. He was more than noticeable on the ice, posting a goal and two assists in the two games.

On Thursday, Dalpe, who potted two goals Monday, and center Ryan MacInnis were recalled to the Columbus taxi squad. That should make the Monsters top six a bit easier for the piglets to try and stop.

Tim Soderlund came into Tuesday night’s contest looking for his first point of the season. The second-year forward is more impressive live than on AHLTV, so I was shocked when it hit home that Soderlund had assists on all three Rockford goals.

A fourth-round pick of the Blackhawks in 2017, Soderlund has speed and plays with his ears pinned back. His task right now is to make his game work within the team structure. His three-point night Tuesday equaled his point production in his 34 prior AHL games (1 G, 2 A).

Soderlund’s assists came from hustle as opposed to vision. On each of the three IceHogs tallies, he was able to get to loose pucks and make it possible for teammates to start scoring plays. He dug out a puck in the corner that allowed Andrei Altybarmakyan to power to the night on Tuesday’s equalizer late in the game. On the game-winner, he forced a turnover by charging in behind Evan Barratt’s dump-in to the end boards.

Soderlund nearly got his first goal of the season, just missing on a pass from Chris Wilkie on an odd-man rush minutes before Rockford tied the game in the third. He’s a prospect to watch in this shortened season. If Soderlund can convert on some scoring opportunities and keep creating pressure on the forecheck, he could make a nice bottom-six forward for Chicago in a couple of years.

The Blackhawks did not make any moves between Chicago and Rockford this week.

The IceHogs announced that Cam Morrison suffered a knee injury in Rockford’s preseason game with the Chicago Wolves on January 27 that ultimately required MCL surgery. With a recovery time of five to six months, it appears his season is over before it started.

Chad Krys left Monday night’s game after the first period and did not return. I am not sure about the injury, but he was a scratch the following night.

By the time the sleepy piglets woke up, the visiting Cleveland Monsters were on their way to a rout. The Hogs quickly fell behind 3-0 on the way to a 7-3 loss to Cleveland, who picked up its first win of the season. Rockford fell to 0-5-1 to begin the 2020-21 campaign.

The Monsters roared out to an early 2-0 lead after Zac Dalpe pulled off two back-door tallies in the first five minutes. Dalpe was set up for the opening goal by former IceHogs captain Tyler Sikura at 4:15 into the first period. Slipping past Rockford defenseman Issak Phillips, Dalpe one-timed the Sikura feed into the basket before Hogs goalie Matt Tomkins could close the door.

On the subsequent faceoff, Sikura got another scoring play started with a pass to Trey Fix-Wolansky. Dalpe was at the left post to double the Cleveland advantage at the 4:26 mark.

Just two minutes later, Monsters defenseman Wyatt Newpower hit Carson Meyer with a stretch pass as Meyer entered the Hogs zone. Meyer split the defense and fired past Tomkins to give Cleveland a 3-0 lead 6:26 into the first.

Rockford got back in the game on the penalty kill. Cleveland goalie Brad Thiessen misplayed a puck behind his net, allowing Mitchell Fossier to gain possession of the biscuit. Fossier found Chris Wilkie crashing the net. His shot banked off the diving Thiessen and into the goal at 8:04 of the first to cut the Monsters lead to 3-1.

Rockford closed to 3-2 after some hard work by MacKenzie Entwistle to chase down a loose puck behind the Cleveland net. Entwistle hit Brad Morrison at the left dot. The shot from Morrison whizzed over Thiessen’s glove for the goal at the 10:53 mark.

The goals just kept coming for the Monsters in the middle frame. Fix-Wolansky used a Sikura screen of Tomkins to fire in a power play strike at 4:37 to make it 4-2 Cleveland. A Meyer shot off a faceoff win slipped under the pads of Tomkins at 5:28.

The IceHogs gained a power play opportunity when Cleveland was nabbed for too many men on the ice. However, Justin Scott swiped the puck from Cody Franson in the first seconds of the man advantage. The shorthanded goal came past the glove side of the beleaguered Tomkins for a 6-2 Monsters advantage at the 10:28 mark.

Cale Morris relieved Tomkins to begin the third period. The Hogs got the final frame off to a promising start when Fossier forced a turnover in front of the Monsters net. Thiessen couldn’t keep the shot out of the cage. Nine seconds into the third, Rockford cut the lead to 6-3.

Morris stopped the first 13 shots he saw as Cleveland kept the Hogs pinned down in their own end most of the third period. The Monsters tacked on a final goal at the 17:07 mark when Nathan Gerbe one-timed the setup by Fix-Wolansky from the right dot.

A tenacious IceHogs defense, coupled with 35 saves by rookie Cale Morris, was the difference in a 3-2 triumph over the Monsters Tuesday night.

The Hogs picked up their first win of the season behind Morris, starting his first professional game. Rockford was able to rally from a goal down late in the contest to gain a measure of revenge for the previous night’s defeat.

A more conservative approach by coach Derek King’s club kept Cleveland from the opportunities from close quarters that sunk the Hogs the evening before. Despite being out shot 37-24, Rockford kept the game close all night until the offense could find cord.

The two teams held each other in check in a scoreless first period. Cleveland gained a power play on a slash by Chris Wilkie six minutes into the second. The Monsters capitalized, taking a 1-0 lead on former Hogs forward Tyler Sikura’s first goal of the season. Sikura was attempting a centering pass from the right post that banked off of the leg of Hogs defenseman Cole Moberg and past Morris at the 6:26 mark.

The IceHogs answered late in the second, following an offensive zone faceoff win by Rockford captain Garrett Mitchell. Issak Phillips gathered in the puck and fired from the left point. Cleveland goalie Veini Vehvilainen made the pad save but left a rebound at the skates of Evan Barratt. Barratt slid the biscuit into the Monsters net at 15:52 of the second period to tie the game at a goal apiece.

Morris and the Rockford defense kept up the good fight despite being pinned in their own end for much of the final period. The levee broke at the 12:27 mark when Evan Polei got a stick on a rebound of Justin Scott’s shot. The puck hopped over Morris and into the cage, giving Cleveland a 2-1 advantage.

Rockford clawed back to level ground with 3:23 remaining. Andrei Altybarmakyan won a battle for the puck in the corner of the offensive zone and fought his way to the right post. The initial shot was snuffed out by Vehvilainen. Altybarmakyan stayed in the crease, ending a scrum around the net by knocking the puck into the net for the equalizer.

The game-winner came off the stick of Issak Phillips, who one-timed a pass from Barratt at the left point. Vehvilainen got a piece of the blast. However, the puck had enough juice left to reach pay dirt with 1:33 remaining.

More Of The Same, Just In Ohio

Rockford is on its way to Cleveland, where the Hogs will finish the season series with the Monsters. The games will be at 6:00 p.m. Central Time on Saturday night and noon on Sunday.