High On The Hog: Toss Up At The BMO 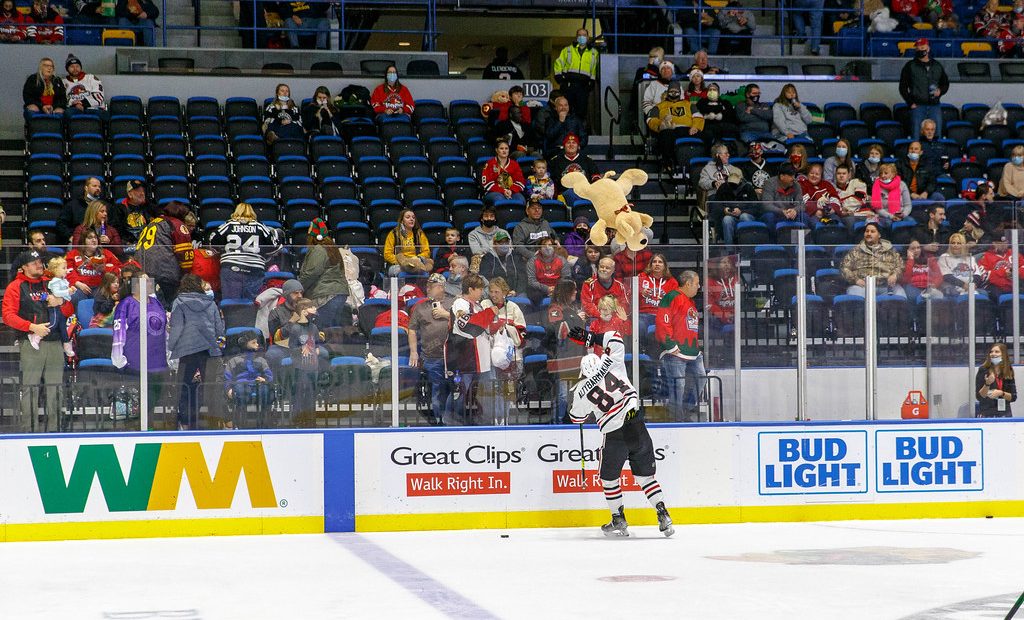 The Rockford IceHogs went 2-1 in a three-game home stand this past week. The piglets improve to 10-9-1-1 on the season and occupy third place in the AHL’s Central Division, which is quickly becoming a two-team race.

The Chicago Wolves and Manitoba Moose are atop the division standings with 34 and 31 points, respectively. Rockford is in the pack of five teams all within three points of one another. At the moment, the IceHogs hold third place with 22 points. Milwaukee currently occupies the basement with 19.

Several players shuffled between Rockford and Chicago this past week. To surmise:

Wyatt Kalynuk’s in Rockford. And probably on suspension.

Chad Krys is in Toronto. With the Marlies, as the piece that brought Kurtis Gabriel to the Hawks.

Brett Connolly, who returned to action this weekend, was recalled with Entwistle by the Blackhawks Sunday.

Riley McKay was recalled to Rockford for Saturday’s game with Henderson. McKay and Chad Yetman were both reassigned to the Indy Fuel Sunday.

Several other forwards, like Lukas Reichel, Dylan McLaughlin, and Kale Howarth, may be nearing a return to action as well.

Garrett Mitchell got the scoring started early for Rockford; Ian Mitchell sent a stretch pass to him as the Hogs captain approached the Wild blueline. Mitchell got to the right dot before sending the puck to the top shelf of the Iowa net. Rockford led 1-0 just 47 seconds into the game.

The Wild tied the game in the latter stages of the first period, just after Rockford had killed off a penalty. Nate Sucese got control of a loose puck near the red line, beat Hogs defenseman Issak Phillips to the front of the net, and sent a shot over the blocker of Rockford goalie Collin Delia at the 13:41 mark.

It was Iowa nabbing a quick goal to begin the second period. Nick Swaney was the recipient of a backdoor feed from Dominic Turgeon at the 1:17 mark. The Wild increased their advantage to 3-1 when Turner Ottenbreit fired from the top of the offensive zone past a screened Delia at 7:55 of the second.

The IceHogs got one back late in the second. D.J. Busdeker capped a nice sequence of passing by Alexander Nylander and Ian Mitchel, who found Busdeker at the right post for the tap in at 18:34. Busdeker’s second goal of the season cut the Iowa lead to 3-2 at the second intermission.

The Wild held Rockford in check until the closing moments, when the Hogs took advantage of some puck luck to post the equalizer with just 1:48 remaining. Wyatt Kalynuk drove the Iowa net but lost control of the puck. Iowa defenseman Doyle Somerby attempted to clear the loose puck, but inadvertently knocked it past Wild goalie Dereck Baribeau.

The teams traded chances in the overtime skate before the contest went to penalty shots. Nylander and Joseph Cramarossa traded goals in round one. Ian Mitchell and Marco Rossi were stopped in the second round. Andrei Altybarmakian’s third-round goal proved the difference, as Delia rejected Swaney’s attempt.

Rockford was shut out By the Silver Knights in the first ever meeting between the two teams.

To watch the first half of the opening period, one would have believed the Hogs to be the better team. Rockford quickly ran up a 10-1 shot advantage in the first ten minutes. Henderson was able to flip a switch midway through the first and controlled most of the remainder of the contest.

Danill Miromanov gave the Silver Knights a lead they would never relinquish at 13:09 of the first. Pavel Dorofeyev made it 2-0 early in the second stanza, but the game didn’t really get out of hand until later in that period.

The IceHogs power play lost possession in the Henderson zone, leading to a breakaway opportunity for Maxim Marushev the other way. In attempting to stop Marushev, Rockford committed an infraction that led to a successful penalty shot. The back-breaker was a Paul Cotter power play tally in the final minute. Jermaine Loewen added the fifth Henderson goal midway though a chippy third period.

In the closing minutes, frustrations boiled over on the Rockford side. Defenseman Wyatt Kalynuk was giving a ten-minute match penalty for an elbow to the head of Reid Duke.

The IceHogs managed just a pair of goals despite out shooting Henderson 42-18 on the evening. Fans at the BMO donated 4753 stuffed animals on Rockford’s annual Teddy Bear Toss.

Again, the IceHogs opened strong and controlled the early action. Saturday, they were able to hold Henderson in check for most of the night.

The Silver Knights opened the scoring on a Jake Leschyshyn goal 18:17 into the first period. However, Rockford had a response less than a minute later. Ryan Stanton found Carson Gicewicz at the bottom of the left circle for the equalizer at the 19:00 mark.

The game stayed tied at one goal apiece until the start of the third period, which opened with 18 seconds of Rockford man advantage. The clock ran out on the power play, but as it expired, Ian Mitchell finished a two-man rush on the Silver Knights net led by MacKenzie Entwistle. The game-winner was sent behind Henderson goalie Logan Thompson 18 seconds into the period.

The piglets will be in Cedar Park this weekend, with two games with the Texas Stars on Friday and Saturday nights.