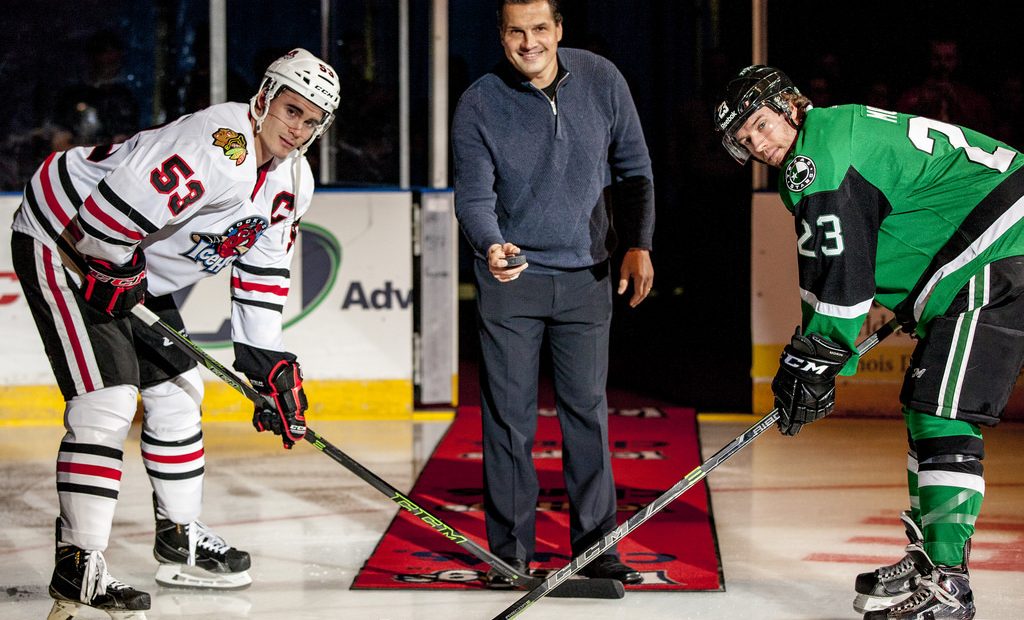 The Rockford IceHogs, AHL affiliate of the Chicago Blackhawks, didn’t lose a game to the Texas Stars in the entirety of last season. This weekend, the Hogs dropped a pair to that squad on consecutive days.

IceHogs fans got a real good look at this team. Rockford’s shortcomings were on full display as the Stars, now undefeated in four games, filled up the net.

Oh, and Rockford named a captain this week. And nearly introduced him Saturday night.

The IceHogs sometimes can take their own sweet time naming a captain. Joakim Nordstrom was announced as last year’s captain on Oct. 28, 2014 but coach Ted Dent has often waited as late as December to name one.

One week into the season, Dent had his man. That would be forward Brandon Mashinter, who becomes the tenth captain in Rockford’s AHL era. The team sent out a release with the news Friday afternoon.

Apparently, not everyone on the IceHogs front office staff read the memo.

So…it’s opening night and the team is being introduced to the home crowd (which, considering the Hawks and Cubs being in action on a nice fall evening was a decent sized house). Everyone is introduced, from GM Mark Bernard all the way down to the training and video staff.

The players are recognized next, even that night’s scratches. Mashinter is skipped because they’re obviously introducing him last. The starting lineup is duly showcased to wild applause.

“Ladies and Gentlemen, your Rockford IceHogs!”

Without fanfare and with more than a few team mates chuckling, Mashinter skated sheepishly out of the giant hog head in the dark, completing a rather dubious start to the evening.

I stop short of calling this a bush-league move because the team appeared to be trying to do this moment right. They just wound up bungling it. On the other hand, they had the entire rest of the game to acknowledge Mashinter as the new Rockford captain and didn’t, so those are points the team definitely left on the table.

Mashinter, 27, wore an A on his sweater at times last season. Along with Cameron Schilling, he was alternate captain in both California games last weekend.

The 6’4″, 223 pound wing has 23 games of NHL experience with San Jose and New York. He came to the organization in the trade that sent Kyle Beach to the Rangers in 2013.

Last season, Mashinter skated in 69 games for the Hogs, scoring 32 points (17 G, 15 A) and dropping the gloves seven times. Mashinter is in his seventh year of professional hockey after signing with the Sharks as a free agent back in 2009.

Sunday afternoon, before an audience half that of opening night, the team congratulated Mashinter on the video board a few minutes into the game. No word on who will be named alternate captains; Jake Dowell wore the A Saturday night and Pierre-Cedric Labrie donned the letter Sunday.

The Hogs effort in their own zone was pathetic; there’s no other way to look at it.

Chris Block of The Third Man In tweeted  about the defense following Sunday’s loss. He pointed out that after allowing five or more goals just three times in 2014-15, Rockford had now done so in three straight games.

In reaching this milestone, the IceHogs surrendered 19 goals. To the surprise of no one, they dropped all three contests.

A year ago, Rockford had a group on the back end that included Klas Dahlbeck, Adam Clendenning, T. J. Brennan, Kyle Cumiskey and Stephan Johns. All save Cumiskey were traded out of the organization, along with college signing Michael Pialotta.

Ville Pokka is the only Hog defenseman that can currently skate (Cumiskey is injured) who skated substantial minutes for Rockford last season. Aside from Cameron Schilling, who has stood out as the best defender of the group, there is little in the way of experience.

Erik Gustafsson and Nolan Valleau are first-year pros. Dillon Fournier and AHL-signing Kirill Gotovets had 33 games of AHL action between them heading into this campaign. Pokka and Dennis Robertson are just second-year players themselves. Where last year’s squad had a host of AHL game action, this year the cupboard is bare.

It’s hard to imagine this group approaching the effectiveness of last year’s defense. However, they need to be better than they’ve shown to be in the early going. A healthy Cumiskey could help a bit, but his return could be weeks away.

In lieu of some veteran help which may not be coming, the babes of the blue line are going to have to learn on the job. Expect growing pains.

Center Vince Hinostroza swapped places with Kyle Baun in Chicago this week. Baun played in both games against the Stars this weekend.

This move leaves the IceHogs a little wanting up the middle. Dent sat Jake Dowell and Dennis Rasmussen Sunday. Centering the bottom three lines were Mark McNeill (who has rarely been at that position in his pro career), Daniel Paille (normally a left wing) and, in his first game action this season, right wing Dane Walters.

UPDATE: Walters was sent to Indianapolis Monday this afternoon along with Fournier. Coming up to the IceHogs was defenseman Sam Jardine, who signed an AHL deal with Rockford late this summer.

Of the eight goals scored by Rockford through the first four games, five have been generated by the line of Marko Dano, Tanner Kero and Jeremy Morin.

One of the few bright spots this weekend was watching the scoring chances generated by Dent’s top line. The trio is a skilled group of skaters that could be a formidable offensive unit, provided it stays together.

The home opener was marred by a sluggish night on the part of the Hogs. Things did not go well in Rockford’s own zone, as evidenced by the Stars Devin Shore recording a hat trick at the BMO Harris Bank Center.

The IceHogs took a 1-0 advantage midway through the first period via the power play. A loose puck in front of Texas goalie Maxime Lagace’s net was pounced on by several Rockford skaters to no avail. Ryan Hartman made a heads-up pass out to Mark McNeill in the slot. The third-year forward sent the puck to the Land Of Twine at 9:17 to give the home team the lead.

The Hogs had a great chance to take command of the contest when Matej Stransky was hit with a double minor for high sticking 40 seconds later. Unfortunately, some very sloppy play over the next few minutes resulted in Shore’s first two tallies.

Shore took advantage of a turnover in the IceHogs zone to post a shorthanded goal a minute into the extended power play. A Garret Ross boarding infraction put the teams at four skaters apiece, and Shore converted off the subsequent face off to put Texas up for good.

The Stars built a 4-1 lead by the middle of the third period before the Hogs were able to respond. Tanner Kero got a stick on a Ville Pokka slapper for his third goal of the season 11:15 into the final frame. The Rockford offense, particularly the top line of Kero, Jeremy Morin and Marko Dano, created some scoring chances in the final 20 minutes. However, it was far too little far too late in the game to do any good.

Rockford was never really into this one; the Stars were up 3-0 after 20 minutes and cruised to an easy win. The IceHogs offered up a stinker in front of special guest Eddie Olcyzk and a large Blackhawks front office contingent.

By the time the IceHogs got on the board with a Ryan Haggerty goal 6:28 into period three, Texas had put up six goals on goalie Mark Visentin. Making his first start for Rockford after taking ill last weekend, Visentin gave up seven goals on 30 Stars shots.

Jeremy Morin scored his second goal of the season at the 13:54 mark. The Hogs put up 17 shots in the final frame but garbage time had arrived long before Rockford’s skaters started finding the net.

Follow me @JonFromi for occasional Hogs news and game updates throughout this week.