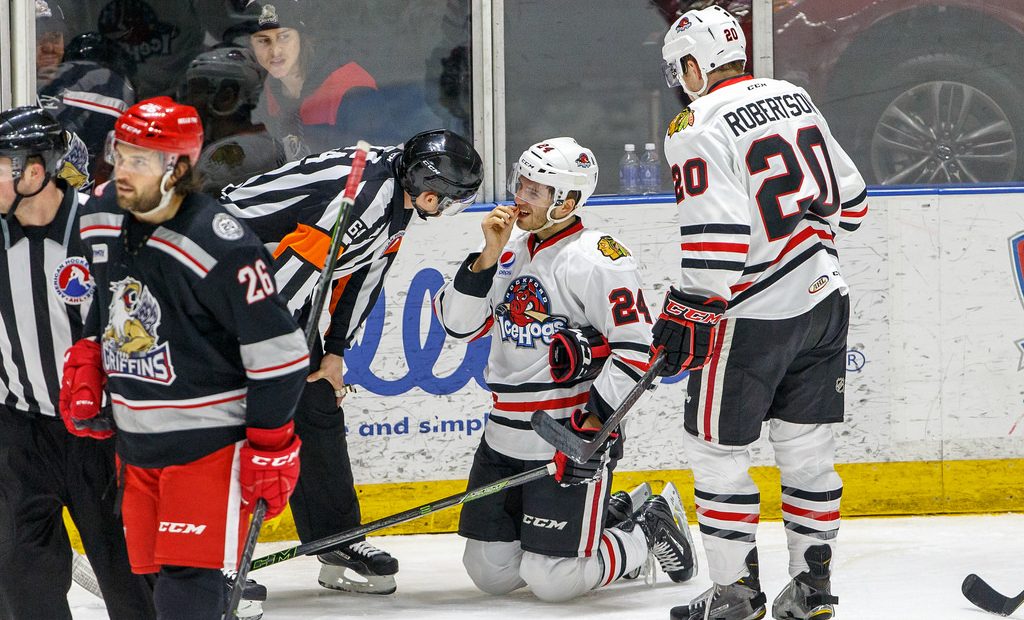 You have to go down quite a way on the league stat sheet to find a Rockford player. Ryan Hartman and recent Hawks call-up Vinnie Hinostroza are listed at 104 and 105 in the points rundown. Both players have 27 points for the IceHogs.

P.C. Labrie leads the team with 13 goals this season, good for 69th place in the AHL rankings. Hartman and Mark McNeill have 12 apiece.

Of the seven teams in the Central Division, there is not one, save Rockford, where Hartman and Hinostroza would pace the club in points. Excepting Manitoba, the IceHogs are the only team in the division who’s leading point scorer has under 30 points.

Of course, Rockford can sooth any inferiority complex by noting that they are on top of one list-the Western Conference standings.

Last season was the first in Rockford’s AHL era in which no player topped the 50-point mark. That is likely to be the case again this season. On the other hand, it isn’t coincidence that the Hogs have enjoyed two of their finest seasons as a team in that span.

Hinostroza was held out of the Hogs lineup on Sunday. He would soon find out that he had been recalled by the Blackhawks in light of Marian Hossa being placed on injured reserve.

I’m not dumb enough to claim that the kid is going to make anyone forget that Hossa’s out of the lineup. That said, I would reckon that the player coming up to Chicago differs from the one Hawks fans saw in October.

The rookie forward’s confidence grew by leaps in bounds in his 39 games with the Hogs since Chicago sent him back October 26. He’s been more aggressive at pursuing the puck. He’s used his wheels to get to scoring areas. Most importantly, he’s converted on those chances with regularity.

Since potting his first professional goal December 18, Hinostroza is hitting the net on 21 percent of his shots. He had seven goals and six helpers in his last 15 AHL games before the call up. It should be interesting as to how Hinostroza fares in this go-round in the NHL.

If you’re planning a trip to Indianapolis in the near future and aren’t sure how to get there, you have some options. You could try Mapquest…or you could try Nick Mattson.

The 24-year-old defenseman should know the route from Indy to Rockford pretty well. Mattson is one of several players on AHL contracts with Rockford who have shuffled back and forth between the IceHogs and the ECHL.

Mattson, who played his college hockey at North Dakota, was a sixth-round pick by the Blackhawks in the 2010 NHL Draft. He signed an AHL deal with the IceHogs this past summer. He’s done most of his on-ice work this season for the Indy Fuel; in 37 games Mattson has a goal and 11 helpers to go with a plus-8 skater rating.

Mattson has been recalled five times by Rockford in 2015-16, including Friday when he joined the Hogs for their weekend schedule. He had just been returned to the Fuel February 9.

A familiar face in warm-ups, Mattson has appeared in just five contests for Rockford. He does, however, have assists in his last two games. He had a helper Sunday in the IceHogs win over Grand Rapids.

Dane Walters was recalled by Rockford for the third time this season on Sunday with Hinostroza getting the call to join the Blackhawks. Walters has a goal in 15 games for the IceHogs this season and has six points in 14 games with the Toledo Walleye.

Daniel Ciampini also knows the route from Indy quite well, having been recalled and sent down three times by Rockford. For the Fuel, Ciampini has seven goals and 14 assists in 30 games. He has a goal in eight games for the Hogs.

A Pair Of Recaps

For just the second time this season, Rockford failed to pick up two points when leading after two periods. Frederick Gaudreau’s hat trick got the Ads into Gus Macker Time, when Kevin Fiala potted the game-winner.

Gaudreau’s first goal was officially unassisted but the helper came courtesy of Nolan Valleau late in the 15th minute. Behind his own net with the puck, Valleau waited for the Hogs to complete a shift change, scanned the ice for his breakout options, then put the puck right on the Milwaukee forward’s tape at the left dot. Gaudreau skated to the slot and fired past Michael Leighton for a 1-0 Admirals advantage at 14:57 of the first period.

The Hogs roared back in the second, scoring the next three goals of the contest. The first came 5:57 into the period when Jake Dowell swatted a loose puck at the bottom of the left circle. The shot gave Marek Mazanec the slip and wound up in the twine and light zone, tying the game at a goal apiece.

Not quite two minutes later, Rockford took advantage of another bouncing piece of rubber to take the lead. This time, the puck was loose in the slot and the recipient of the good fortune was Mark McNeill. McNeill banged home his attempt past Mazanec at 7:52 to make it 2-1 IceHogs.

Rockford hasn’t had much luck against the Admirals when up a man but stretched the lead to two goals with a power play tally with 4:29 to go in the second. The lamp-lighter came off the stick of Cameron Schilling, who got a nice screen from Bryan Bickell that helped his point shot elude Mazanec.

Gaudreau drew Milwaukee to within a goal about ninety seconds later after Schilling’s pocket was picked by the Ads Colton Sissons. Gaudreau took the pass at the right circle and tossed the shot past Leighton, off the left post and into the cage, making it 3-2 Rockford going into the final twenty.

The IceHogs held that lead for nearly the entirety of the final period. With just 47 seconds remaining and Mazenec on the bench, Stefan Elliot fired on goal from the top of the left circle. Leighton made the stop but the rebound lay just out of his reach in front of the net. Gaudreau beat Kirill Gotovets for control and sent the puck to the back of the net to draw Milwaukee even.

In the Gus Macker session, the Admirals scored shortly after Vinnie Hinostoza’s impressive drive to the net ended when he couldn’t quite pull the trigger on a backhand attempt. Milwaukee got the puck when Marko Dano’s pass was picked off by Cody Hodgson and the Ads skated the other way with a 2-on-1 rush.

Fiala took Hadgson’s pass across the crease, getting Leighton down before flipping a forehand shot over his pads to end the game at the 2:46 mark of overtime.

The IceHogs fell behind by two goals early in this game but rallied to snap a four game losing streak. This was a nice win against a Griffins squad that had beaten Rockford in the last four meetings between the teams.

Grand Rapids got on the board via a power play goal by Martin Frk 6:21 into the contest. They were up 2-0 after a Tomas Nosek goal before the Hogs power play responded late in the period.

While on a two-man advantage, Bryan Bickell one-timed a Nick Mattson pass at the top of the right circle. The blast found the net behind Jared Coreau at 16:47 to allow Rockford to enter the first intermission down just 2-1.

The Hogs potted the equalizer a little past the midway point of the game. The play started with Marko Dano coming up with a turnover at center ice. Eventually he set up Mark McNeill for a shot at the left post.

Coreau knocked the attempt into the corner of the Griffins zone but McNeill chased it down and worked his way to the front of the net. Coreau stopped another McNeill shot before Ryan Hartman backhanded the rebound past the Grand Rapids goalie at 12:04 of the second period.

Rockford completed the comeback with another Bickell goal 5:04 into the third. Kyle Baun picked up his first point as a member of the IceHogs, skating into the right corner to retrieve an attempt by Bickell. Baun brought the along the end boards and found Ville Pokka out at the blue line. Bickell got a piece of the resulting shot and cued the horn at 5:04.

Up 3-2, the Hogs picked up an insurance goal with another strike on the man advantage. It was McNeill’s turn to clean up an attempt by Hartman, helping the puck home at 9:15 of the final frame to close out the scoring.

The three stars, in order, were Bickell, McNeill and Hartman. Michael Leighton made 25 saves on 27 Grand Rapids shots for his 24th win of the season.

Dowell-Ross-Haggerty-Bickell-Mattson (This group scored on the 5-on-3).

The Hogs are looking to build a winning streak after a tough stretch in the last couple of weeks. The remedy could well be a visit to the BMO by the Manitoba Moose, currently just above Iowa with the worst record in the AHL.

The Moose take on Rockford in a 10:30 a.m. contest on Wednesday, then face off with the Hogs Friday night. Rockford then starts a five-game road swing with a Saturday night date with the Wolves.

Follow me @JonFromi on twitter for whatever thoughts I can spare on the Hogs throughout the season.

Once More Unto The Breach – The Committed Indian's Season Preview: Should Andrew Shaw Be Part Of Cap Trade?

Now We’re In The Deep End Where They’d Love To Watch You Drown: Hawks at Kings Game 4 Preview/Pregame Thread/Dueling Tubas