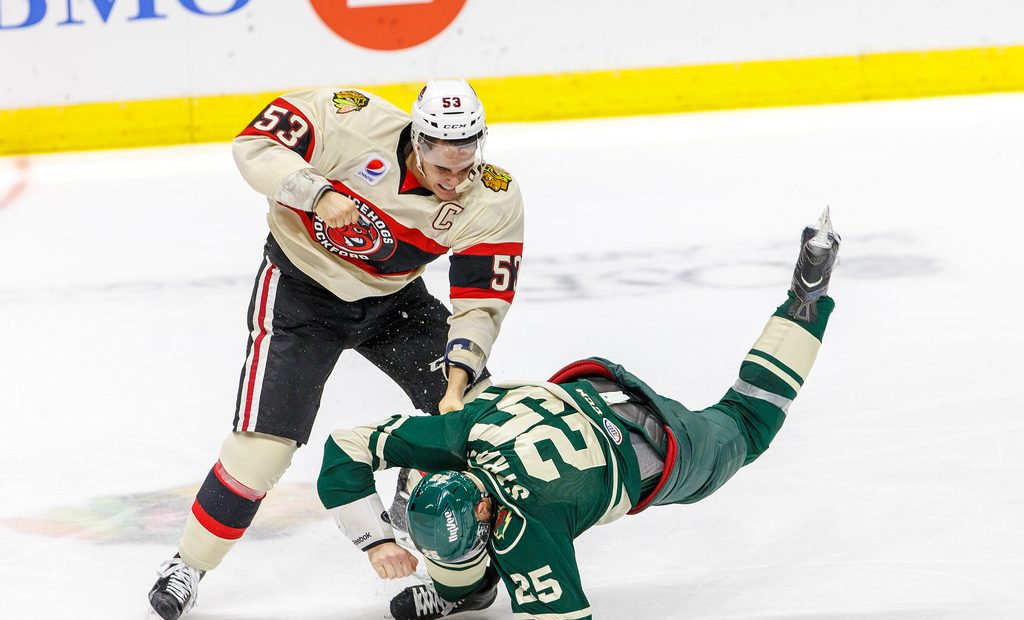 Specialty teams haven’t been a forte for the Rockford IceHogs at this point and time of the season.

Fisher was responding to Wild play-by-play announcer Joe O’Donnell, who noted that Rockford’s PK unit was ranked 23rd in the AHL. The power play was dead last in the league before a tally against Iowa propelled the Hogs to the 29th spot.

There is, however, reason for optimism. The penalty kill did not give up a goal in 12 chances this week. The fact that the IceHogs spent less time in the penalty box helped. Of course, it may be purely coincidental that Ryan Hartman is now in Chicago and not committing infractions in Rockford.

After a horrendous start to the season that saw the Hogs give up seven power play goals in their first four contests, Rockford has killed 25 of 28 penalties since. The IceHogs PK unit is operating at 89 percent efficiency over the last two weeks. It may not be quite as aggressive without the forecheck from Hell, Phillip Danault, manning his post. It has, however, begun to return to last season’s form.

The power play is another matter. Rockford was two-for-15 this week; that was actually an improvement over what had come before. It’s hard to say that the chances haven’t been there, though. The IceHogs have had success setting up and getting shots on goal…just not in the goal.

Friday night’s game with Iowa marked the first time this season that I brought the 11-year-old to the BMO Harris Bank Center. This is noteworthy to the folks in our section of the arena because of his past history with handling confections.

One evening, when the 11-year-old was the nine-year-old, he returned to his seat with a large dish of Dippin’ Dots as the first intermission drew to a close. He then promptly dropped the entire contents of the container onto the floor, aisle and steps. Maintenance was dispatched to clean up the fast-rolling ice cream while he did the slow burn.

As a result of this, he now has to hear about his dropping of the dots every time he visits the Dippin’ Dots stand (which is every time he comes to a game, actually). He also has at least four or five people remind him to be careful with his ice cream. I would imagine this is what goalies go through on a nightly basis (without getting to eat the Dippin’ Dots).

Erik Gustafsson (Wednesday) and Ryan Hartman (Friday) were recalled to Chicago, joining Tanner Kero, who was called up on Tuesday. Nick Mattson, on an AHL deal with Rockford, was brought up from Indianapolis Wednesday and skated in both weekend games with the IceHogs.

In other news, the Blackhawks recalled Vince Hinostroza to Chicago October 16 and sent Vinnie Hinostroza back to the IceHogs on October 27.

Oh yeah…Marko Dano and Bryan Bickell are switching spots as of Monday morning, just in case you haven’t heard about it.

The IceHogs picked up a point but saw their three-game win streak go by the wayside thanks to a strong effort by veteran goalie Drew MacIntyre. The Checkers net-minder made 36 stops on 37 Rockford shots.

The game was scoreless until the waning minutes of the contest. A defensive zone turnover by Erik Gustafsson led to a Derek Ryan goal 13:48 into the third period.

The Hogs were able to tie it up in the 19th minute, thanks to a Charlotte penalty and an empty Rockford net. In the resulting 6-on-4, Ryan Hartman got a piece of Jeremy Morin’s shot from the top of the left circle. The Hogs drew even at 18:32 of the period.

The IceHogs were active during Gus Macker time but MacIntyre kept the puck out of his net. The first two Checkers skaters drew twine in the shootout, while the Charlotte goalie stymied Marko Dano, Garret Ross and Morin to finish Rockford.

Dano-Morin-Hinostroza-Hartman-Pokka (Baun was the extra skater for the PP goal.)

Michael Leighton posted his 42nd AHL shutout, stopping 20 shots as the Hogs defeated the Wild. Coach Ted Dent went with an extra defenseman on this night, paving the way for the AHL debuts of Nick Mattson and Sam Jardine.

The defense potted Rockford’s first goal 8:31 into the game after Dennis Robertson picked off a pass at the red line. Robertson skated to the left dot, unleashing a wrister that five-holed Wild goalie Leland Irving and tickled twine.

The IceHogs, who held the upper hand all evening, added to the lead with a pair of goals in the second period. Brandon Mashinter pounced on a turnover by Iowa’s Zach Palmquist in the neutral zone. Mashinter hit Marko Dano for the entry into the Wild zone, then skated to the slot to take a return pass from Dano. The captain fired top shelf to the glove side and cued the horn for a 2-0 Rockford advantage at the 6:32 mark.

Rockford’s power play factored into the mix a few minutes later, holding the puck in the Iowa zone for the last 45 seconds of the man advantage. The penalty expired, but Mark McNeill skated into the left corner and zipped a pass to Nolan Valleau in the slot. Valleau quickly found Dennis Rasmussen open at the right dot. A Swedish meatball was summarily served into Irving’s open net and the Hogs led 3-0 9:38 into the middle frame.

Rockford scored again nearly eight minutes into the third period. This goal came courtesy of Jake Dowell’s offensive faceoff win from the left circle. The puck found the stick of Pierre-Cedric Labrie. An instant later, Labrie’s one-time effort nestled into the top right corner of the net. At 7:55, the IceHogs led 4-0.

At 7:56, Labrie dropped the gloves. Iowa’s Kurtis Gabriel was the challenger and the two had a brief affair that saw Labrie get in a shot or two before losing his helmet and wrestling Gabriel to the ice.

Despite the bout, a frustrated Iowa club was still feeling ornery. On the subsequent shift, Tyson Strachan engaged Mashinter at center ice. In another short dance, Mashinter popped his opponent with a couple of left jabs before the pair wound up on the ice.

With just under five minutes left in the contest, Jardine took offense to a shove in the back from Gabriel near the right post of the Rockford net. Jardine used his stick to let Gabriel know he was there; the two soon lost their gloves and squared off.

For a second it looked as if the officials may have to go in and save the rookie. However, the former Buckeye (who was a plus-two on the night) managed to hang on and left the ice surface with his head still on his shoulders. Welcome to the AHL, Mr. Jardine.

The stars of the game was an all-Rockford edition; Leighton was the first star, followed by Robertson and Labrie.

Dent iced just 11 forwards Friday, so there were a lot of combinations.

Power Play (0-4, though the third goal came right after a pretty dominant shift)

It was Mark Visentin’s turn to shut out the Wild on Sunday. In just his second start of the season, Visentin stopped 38 Iowa shots in the Wells Fargo Arena to make it a weekend sweep of their Central Division rival.

The Wild broadcast team correctly pointed out that both special teams units are near the bottom of the AHL. Those special teams were directly responsible for the IceHogs win.

Rockford opened the scoring with Garret Ross’s first tally of the 2015-16 campaign. The goal came after Nolan Valleau held a pass from Cameron Schilling just inside the blue line.

Valleau got the puck to Dennis Rasmussen at the top of the right circle. Rasmussen found Ross at the right post. With his back to Wild goalie Leland Irving, Ross backhanded the biscuit through Irving’s wickets for a 1-0 Rockford advantage at the 8:55 mark.

Late in the game, Chris DeSousa was called for holding. The Hogs penalty kill unit faced a desperate Iowa attempt to knot the contest with 3:22 to play. Near the end of the power play, Wild coach John Torchetti yanked Irving for the extra skater.

Seconds after the Iowa goalie arrived at the bench, the man advantage expired and Mark McNeill found himself with a loose puck in the center of his own zone. McNeill flipped a pass over a couple of Wild skaters and across the Iowa blue line. DeSousa skated out of the penalty box, collected the pass and strolled in for the empty net dagger.

Visentin and Ross were the game’s first and second starts, respectively. Dent went with the extra defender again Sunday, as did Torchetti.

Rockford is idle until Friday, when the Hogs travel to Grand Rapids for their first meeting of the season with the Griffins. The Milwaukee Admirals come to the BMO Harris Bank Center Saturday night. Follow me on twitter @JonFromi for IceHogs happenings and the occasional game update.