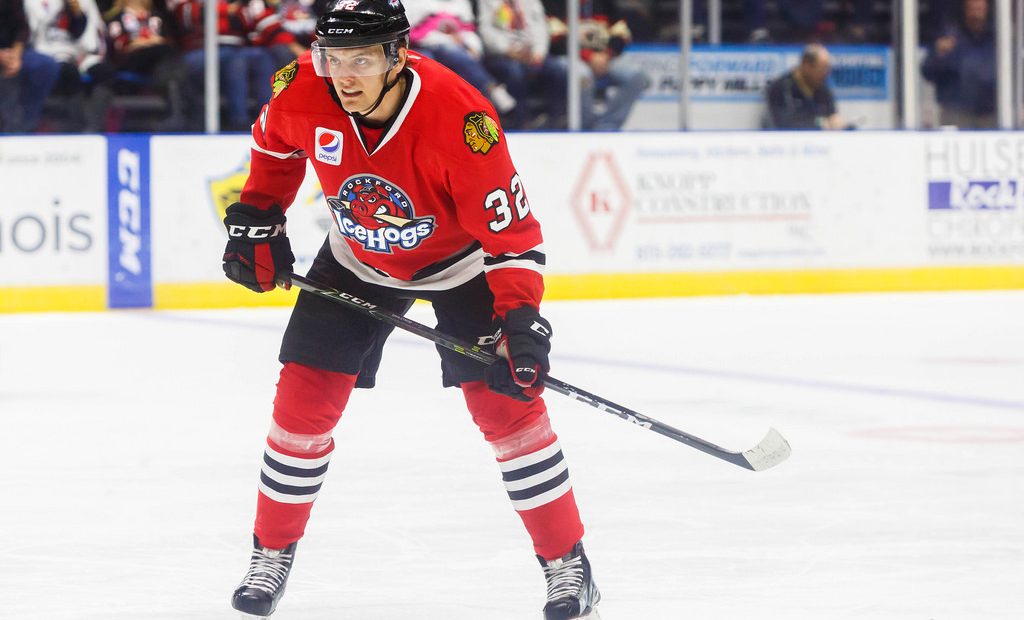 To say the Rockford IceHogs have been depleted by the deadline deals of their parent club would be a massive understatement.

Hey, that’s the way it goes when you are an affiliate. As the AHL season approaches the final weeks, the fact remains that the Hogs are going to be suffering from a definite lack of manpower.

Last week, Mark McNeill was a late scratch for Rockford’s game with Manitoba. He had just been dealt to the Dallas Stars in the Johnny Oduya exchange.

The next day, Chicago sent Spencer Abbott and Sam Carrick to Anaheim for ECHL forward Kenton Helgesen and a seventh-round draft pick. This was a minor move for the Hawks that sends a major jolt down I-90.

Abbott and Carrick had been one-two in scoring for the offensively-challenged IceHogs this season. Number three on that list? McNeill, who had cleaned out his locker the day before.

Rockford, who is dead last in the AHL in goals per contest, now must slag their way through the remainder of the schedule minus its top three scorers. Coming back to Rockford this week? Not a darn thing. Helgesen was assigned to the Indy Fuel.

Not a dire enough forecast, you say? Chicago recalled Jeff Glass, who had claimed the number-one goalie position for the Hogs, on Friday. With Scott Darling injured, Glass will likely back up Corey Crawford for the next couple of weeks. It wouldn’t be a stretch to think he’ll remain on the Hawks roster for the playoffs.

Not surprisingly, Rockford skidded through last week’s slate, dropping three home tilts to extend its losing streak to five games. The Hogs have been putting in the effort despite the tough circumstances. There wasn’t any quit evident in the three-game home stand. However, it is very apparent that this is an undermanned squad. That’s going to be the case the rest of the season.

The Hogs should still be worth watching in the final weeks, though. I’d like to see how Kyle Baun finishes the campaign. He has had a solid season (11 G, 15 A) and should be skating big minutes on potential scoring lines.

Vinnie Hinostroza and Tyler Motte are two players who will have to step up their games to fill the scoring void. Rookie forward Luke Johnson could also win some extra minutes.

The situation in goal will be interesting to watch. Mac Carruth was the odd man out with the arrival of Glass back in January. Glass’s recall provided an opportunity for the 24-year-old Carruth; four goals allowed in 24 minutes Friday night may have sealed his fate in the organization. How will coach Ted Dent divide the starts between Carruth and Lars Johansson?

There is also a strong likelihood that Rockford signs a slew of players to try-out contracts in the next few weeks, provided that Blackhawks prospects finish their college or junior seasons before the IceHogs final game April 15. With not much to play for in the last 15 games, we might get a decent glimpse at what could be the nucleus of next season’s club.

Rockford rallied from a three-goal hole but still wound up dropping their return to the BMO Harris Bank Center to the Moose.

The Hogs gave up a pair of late goals to end the opening period. Peter Stoykowych redirected a J.C. Lipon shot past Rockford starter Lars Johansson at 16:32. With just over a minute to play in the first, Kyle Connor was left loose in the slot and backhanded a shot past Johansson for a 2-0 lead.

Johansson’s night came to an end after Dan DeSalvo slipped a rebound across the goal line for a 3-0 Manitoba advantage. Jeff Glass came into the game at the 3:36 mark.

Rockford got back a goal via a sweet defensive play by Spencer Abbott. Swiping a pass from Stoykowych just inside the Hogs zone, Abbott cruised up the ice behind the defense. Jamie Phillips never had a chance as Abbott showed backhand before bringing the puck back to the forehand side. From there, it was an easy finish at 4:23 of the second period.

Both teams were prone to penalties midway through the second. It was during a power play that the IceHogs closed the gap to a single goal. Ville Pokka one-timed a pass by Erik Gustafsson into the Manitoba net at the 15:05 mark to make it 3-2 in favor of the Moose.

Glass denied Quinton Howden on a penalty shot late in the period to keep the Hogs in the contest. Rockford went into the second intermission still within striking distance.

The IceHogs were able to complete the three-goal comeback 6:52 into the final period. Vinnie Hinostroza came into the Manitoba zone from the right side and found Gustafsson trailing in the slot. The snipe was true and Rockford was finally on even ground.

That lasted for nearly three minutes until the Hogs got caught in a line change. Brenden Lemieux got to the net and scored at the 9:50 mark for a 4-3 Moose lead. The IceHogs pulled Glass in the waning moments but couldn’t get established in the Manitoba zone. Brian Strait added an empty-net goal to finish off the Hogs.

Mac Carruth got the start in net for the first time in a month. It didn’t go the way he needed it to; the Moose put Rockford in a four-goal hole from which the Hogs could not climb.

Manitoba scored 11 seconds into the contest when Kyle Connor gathered in a loose puck along the left half boards and snuck the resulting shot under Carruth’s pads. The Moose entered the second period up 1-0, taking a commanding lead in the opening minutes of the middle stanza.

Connor and Dan DeSalvo worked a give-and-go to perfection for a 2-0 lead at the 1:10 mark. At 2:38, a Hogs turnover left Scott Kosmachuck a wide open look that he converted for a 3-0 advantage. Carruth’s evening came to a close when Quinton Howden stuck in a rebound 3:36 into the period. Down 4-0, Lars Johansson replaced Carruth.

At the start of the third period, the IceHogs turned the tables on Manitoba, potting three quick goals to storm back into contention. All came on the power play.

Kyle Baun started the scoring frenzy 1:02 into the final period, one-timing Tyler Motte’s offering past Eric Comrie. Luke Johnson successfully fired one home from the top of the right circle to make it 4-2 at 2:41. Motte redirected a Ville Pokka blast into the cage at 4:22. All of a sudden, it was a 4-3 game.

That would be the extent of the Rockford comeback, however. The Hogs threw 18 shots at Comrie in the final 20 minutes but the Moose goalie stopped enough to keep his team ahead. Manitoba got an empty net tally from J.C. Lipon to lock it up with 90 seconds remaining.

No lines this game; Jake Dowell was in the lineup for the first time since February 15. The Hogs power play was three of eight on the night. Rockford also killed all four penalties.

The Wild were not gracious guests, sending Rockford to its fifth-straight loss in front of a sellout crowd at the BMO Harris Bank Center. Long time Chicago Wolves forward Pat Cannone did the damage with both Iowa goals.

Cannone put back a Lars Johansson rebound off of a Colton Beck shot at 13:26 of the first period for a 1-0 Iowa lead. Rockford tied the game 1:14 into the second when Chris DeSousa got a piece of Carl Dahlstrom’s point shot. The redirect was enough to get the puck past Alex Stalock and tied the game at a goal apiece.

Cannone’s second goal was the game-winner; it came off of a pass from Ryan Carter on an odd-man rush. The veteran skated to the right post and one-timed the offering past Johansson at 13:57 of the second.

Rockford has just one game this week; the Hogs are in action Friday night in Milwaukee.