High On The Hog: December Defense 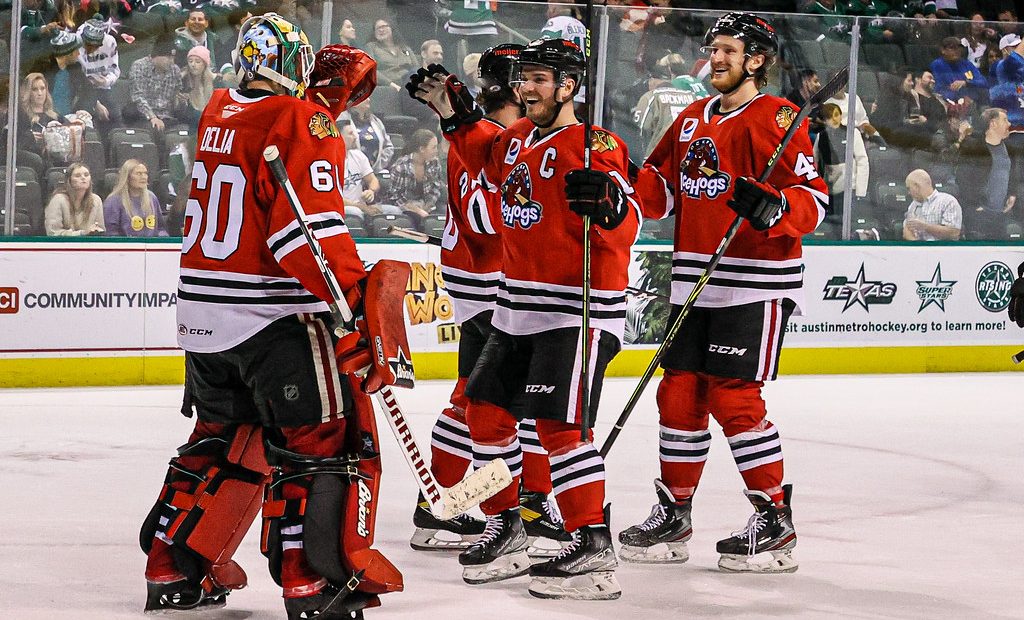 The Rockford IceHogs split a weekend in Texas, running their December record to 5-3 and maintaining third place in the AHL’s Central Division. Rockford (11-10-1-1) has used improved defense to go 6-3-1 over its last ten games.

The piglets are giving up 3.26 goals per contest. That’s about a half goal less than a month ago. In seven December contests, Rockford is holding opponents to 2.85 goals. The tightened defense has definitely been a catalyst to a more competitive IceHogs squad.

The Chicago Wolves has separated them from the other division clubs, having lost just five games this season. Three of those five losses have come at the hands of the Hogs. Rockford’s 3-2 shootout triumph on November 20 was the last defeat of Chicago by anyone in a month; the Wolves (20-4-1) have won twelve straight since then.

Defenseman Ian Mitchell was recalled by the Blackhawks after skating for Rockford in Friday’s win in Cedar Park. Mitchell and forward Josiah Slavin were assigned to the Hogs Sunday.

A host of Rockford skaters returned to action over the weekend, including Lukas Reichel (concussion) Dylan McLaughlin (COVID protocol), and Jakub Galvas (concussion). Goalie Arvid Soderblom came out of the concussion protocol to play Saturday night.

The IceHogs struck twice in 30 seconds in the opening period. Dylan McLaughlin hauled in a long stretch pass from Nicolas Beaudin at the Texas blueline. McLaughlin, back in action for Rockford after missing four games, skated to the front of the net and five-holed Stars goalie Anton Khodobin at the seven minute-mark for a 1-0 Hogs lead.

Alex Nylander, assisted by Issak Phillips on an odd-man rush, extended the Rockford advantage with a wrister past Khodobin at 7:30 of the first. Texas cut the lead to 2-1 at 8:55 on a Ben Gleason goal.

Rockford out-shot the Stars 13-7 in the second period, garnering several up-close scoring opportunities. Khudobin kept Texas in the game in the second period, then stifled the Hogs throughout the third. His paddle save of McLaughlin’s shot at an open net midway through the period was one of many outstanding stops.

The IceHogs were only able to pick up an insurance goal when the Texas netminder was called to the bench in the closing minutes. Ironically, the goal was credited to Rockford goalie Collin Delia, who made a pad save for his 24th stop of the evening. An errant centering pass wound up in the Stars net; as the last Rockford player to touch the puck, the Cucamonga Kid picked up his first AHL goal at the 19:57 mark.

Rockford staged a late rally that came up short, as the Stars rode another solid performance by Anton Khudobin in Saturday’s rematch.

After a scoreless first period, Texas took a 1-0 lead on a Curtis McKenzie goal 2:28 into the second. The goal was set up off a Josh Melnick shot attempt that was blocked by Hogs defenseman Nicolas Beaudin. McKenzie got the puck on his stick at the right post and slipped it past Hogs starter Arvid Soderblom.

The Stars captain picked up his second of the night late in the second. Joel L’Esperance sent a cross-ice pass over the stick of Hogs defenseman Issak Phillips to McKenzie at the right dot. The goal came with 1:05 remaining, sending Rockford to the intermission down 2-0.

Texas went up 3-0 midway through the third period on Tye Felhaber’s first goal of the season. The Hogs broke up Anton Khudobin’s shutout bid with a Mike Hardman goal from the right post at the 14:04 mark.

A high-sticking penalty by the Stars Riley Damiani prompted Rockford to pull Soderblom for an extra skater. Lukas Reichel found the mark from the top of the right circle with 2:35 left to pull the Hogs within a goal. Unfortunately, that’s as close as the game got.

The IceHogs host Milwaukee Tuesday night in their only action this week.