High On The Hog: Coming Home 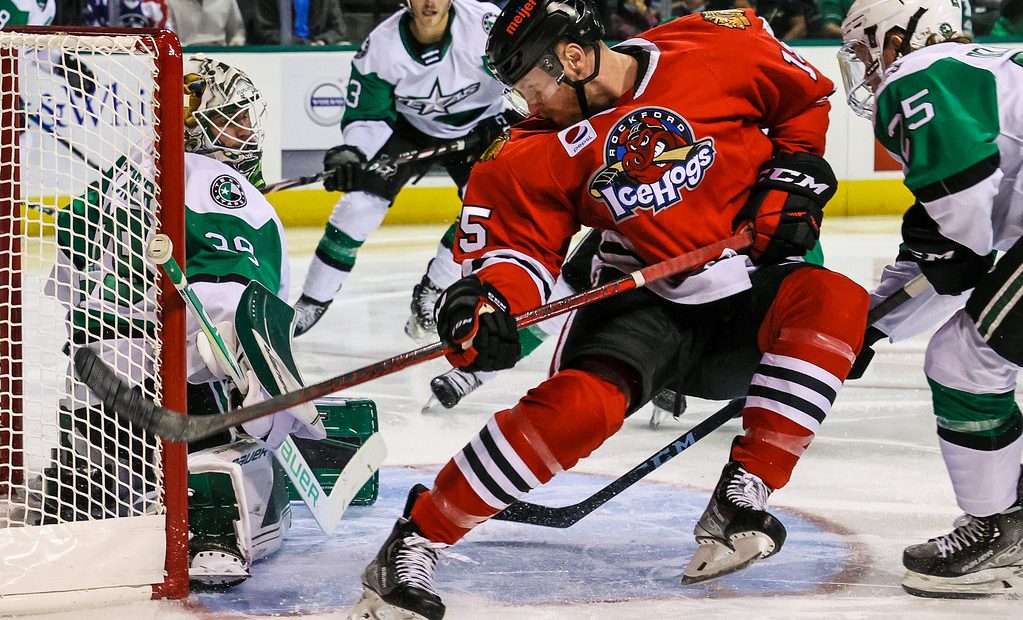 The Rockford IceHogs will finally commence with the home portion of their 2021-22 schedule. The piglets finished their six-game road trip Saturday night with a 4-3 win over the Texas Stars, earning a split of the two game set in Cedar Park.

“I’m looking forward to getting home and just being home for a while,” Rockford coach Derek King admitted to Hogs broadcaster Joey Zakrzewski after the win. “Maybe get practicing on our own rink and have a couple days off here.”

Saturday’s win broke a three-game skid and hopefully builds some momentum for the IceHogs as they open play at the newly refurbished BMO Harris Bank Center. Rockford, who is now 2-4 and in sixth place in the AHL’s Central Division, begins a five-game home stand on Saturday, November 6. The Hogs host Grand Rapids in the home opener, then welcome Manitoba into the BMO the following afternoon.

Rockford won’t leave the state of Illinois in November; seven of its nine games are at home. The other two dates are in Rosemont with the Chicago Wolves.

The IceHogs will spend the entire month battling Central Division foes, including their first look at the Moose since the 2019-20 campaign. Rockford will also re-establish its rivalry with the Milwaukee Admirals, who opted out of the 2020-21 season, when the Ads arrive at the BMO November 26.

As was the case the previous weekend, D Chad Krys did not play in Texas. Krys was injured against the Wolves October 16 and has not played since. Also sitting out the weekend was F Evan Barratt, who left an Octover 23 game in Iowa with an apparent injury.

AHL forward Kale Howarth (lower body) and Hawks defensive prospect Alec Regula (back) have yet to take the ice for Rockford this season.

Defensive breakdowns by the Hogs coupled with a solid performance by Stars goalie Jake Oettinger sent Rockford to its third-straight loss.

It was all Texas in the opening period. Ty Dellandrea capitalized on a Hogs turnover to cap off an odd-man rush on Rockford goalie Malcom Subban eight minutes into the contest. Just over two minutes later, Riley Tufte hauled in a stretch pass from Fredrik Karlstrom, split the defensive pairing of Nicolas Beaudin and Ian Mitchell, and beat Subban for a 2-0 Texas lead.

The IceHogs cut the lead in half 26 seconds into the second period. The forward line of Josiah Slavin, Carson Gicewicz, and D.J. Busdeker worked the puck around the Texas zone, scoring when Buskdeker found Gicewicz at the left post. Gicewicz muscled the puck past Stars goalie Jake Oettinger for his first pro goal.

Texas re-established a two-goal lead at the 6:10 mark. Andreas Borgman was able to skate past Busdeker and found himself wide open for a pass from Jordan Kawaguchi. Borgman completed the back door tally and it was 3-1 Stars.

Oettinger was too good for the Hogs to rally in the third period. Subban kept the Stars at three goals, stopping 31 of 34 shots on the evening. Rockford was unable to get any closer; Oskar Back scored an empty net goal at the buzzer to close out the scoring.

Arvid Soderblom picked up the win with 45 saves for the IceHogs, who broke a three-game skid despite being out shot 48-19.

Rockford took a 1-0 lead via the power play. With Joseph Cecconi in the box for hooking Cameron Morrison, Lukas Reichel won the ensuing faceoff at the left circle. Brett Connolly dug the puck out of the left half boards out to Nicolas Beudin at the left point. From there, the puck arrived to the blade of Alexander Nylander, who send a laser from the top of the right circle. The shot got by Stars goalie Jake Oettinger, struck the left post and settled into the net at 4:52 of the first period.

The Hogs doubled the lead at the 13:12 mark, when Lukas Reichel drove to the left post after taking a long pass from Beaudin. The shot attempt glanced off of Stars defenseman Thomas Harley and past Oettinger for a 2-0 Rockford advantage. Ian Mitchell picked up the secondary assist after retrieving the puck out of the corner of the Hogs zone.

Texas cut into the Hogs lead with a long-distance goal by Stars defenseman Andreas Borgman. Borgman’s offering from just inside the Rockford blueline fluttered through traffic before getting past IceHogs goalie Arvid Soderblom, off the crossbar and into the cage at 12:34, making the score 2-1 Rockford.

The Stars sent 22 pucks on Soderblom in the middle frame and had four power plays turned away by the IceHogs. After Rockford spent nearly four minutes shorthanded, Dylan McLaughlin and Garrett Mitchell wrested control of the puck from along the boards in the Hogs zone. Mitchell found Brett Connolly coming down the right side of the ice. McLauglin trailed the play, taking the feed from Connolly and beating Oettinger’s stick side 19:05 into the second for a 3-1 Rockford lead.

Rockford went up 4-1 just 2:09 into the third period. The scoring play was set up by a nice hold by Jakub Galvas at the blueline. Galvas sent the puck into the right corner, where it was retrieved by Carson Gicewicz. The resulting pass went to D.J. Busdeker, who hit Josiah Slavin as he was driving to the net. The shot went through the five hole of Oettinger to finish off an impressive shift.

The Stars kept up the pressure, scoring five minutes into the third on a Jacob Peterson goal. Soderblom had to deny a penalty shot by Jordan Kawaguchi after Beaudin tossed his stick at a shorthanded rush against the Hogs midway through the period.

Peterson cut the lead to 4-3 with 2:44 remaining and Oettinger on the bench for an extra skater. The IceHogs hung on in the final minutes despite a six-man push by Texas.