1. Rockford Has Picked Up A Few Points Here And There

Of the nine losses, six have been by a single goal; a break here and there and Rockford can get things turned around. Hey! I said stay positive!

2. The Problems Aren’t In Goal

Believe me, the play in net is the least of Rockford’s worries. Yes, losing Lars Johnansson to the Blackhawks comes at an inopportune time. The two goalies in Rockford right now haven’t been bad, though.

I’m not going to justify this point with any numbers because that definitely won’t help my cause. Suffice to say that Jake Hildebrand came up from Indy and played well in relief of Mac Curruth last Sunday as well as in a start against the Rampage Wednesday.

Curruth, provided he gets steady work, should become more consistent. He played awful well Saturday night, allowing just one goal to the high-powered offense of the Texas Stars. Sure, Texas dropped eight on the IceHogs the night before…staying positive…staying positive…

3. Lots Of Maiden-Breakers This Week

Nick Schmaltz came down to Rockford last week and had himself a heck of a debut Wednesday night. Hogs coach Ted Dent flanked Schmaltz with Spencer Abbott and Tanner Kero against the Rampage. Schmaltz hit for his first two AHL goals in what turned out to be a 3-2 overtime loss.

Friday night, Luke Johnson picked up his first professional goal against Texas. I would be remiss if I did not point out that Vinnie Hinostroza didn’t find the back of a net until December 2 of last year and still wound up with 18 goals. Johnson is still seeing fourth-line minutes, but maybe this gives the rookie center a jolt of confidence.

In that same game, Robin Norell sent his first AHL biscuit into a basket. Norell looks a little bit like former Blackhawks defenseman David Rundblad. Not sure if that’s a positive or…forget it. Moving right along…

4. Cameron Schilling Is Having A Pretty Solid Season

Schilling is tied for the team lead in goals with six. That’s one off his career-best of seven, set back with Hershey in 2012-13.

The 6’2″ Carmel, Indiana native is a factor for the IceHogs at both ends. Last year, he had 22 points (5 G, 17 A) in 73 games with Rockford. He’s really made a lot happen offensively from up top. On the other hand, he’s in danger of having a negative plus-minus for a full season for the first time in his fifth pro season…AAARGH! POSITIVE!

What I originally meant by this is that Rockford is continuing to work even when they fall behind. Friday, the Hogs went down three goals to Texas and rallied to tie the Stars in the first eight minutes of the second period. They also came back the next night and nearly broke the losing skid.

Of course, Rockford skaters also dropped the gloves four times in three games last week. So you could also draw a positive from that if you are so inclined.

6. All Streaks Gotta End…Don’t They?

I kind of doubt that Schmaltz is going to pick this club up and carry them up the standings. However, his presence is a positive for a club struggling to score. Perhaps he jump-starts Abbott and Kero, who have been uncharacteristically quiet for the last dozen games.

Maybe Johnson starts finding the net on occasion. The team may start finding the mark in the passing game. Mark McNeill could heat up.

Hogs coach Ted Dent has a week to try and get things sorted out before the season continues Saturday night when Rockford hosts Manitoba. Gotta stay positive.

Rockford brought Tyler Barnes back up from the Indy Fuel on Monday. With Brandon Mashinter not skating in either of the weekend games in Texas, it’s possible he could be injured. If that were to be the case, that would give the Hogs 14 healthy forwards and seven healthy defensemen.

Nick Schmaltz had a impressive debut and the Hogs did pick up a point after trailing by two goals. However, the Rampage prevailed in overtime to hand Rockford its sixth straight defeat.

The IceHogs gave up two power play goals in the opening 20 minutes. Midway through the second frame, Schmaltz was sprung for a breakaway via a long pass by Spencer Abbott. Schmaltz victimized the glove side of Rampage goalie Spencer Martin, rubber was united with twine, and Rockford had cut the lead to 2-1 at the 10:43 mark.

With 18 seconds remaining in the second period, Schmaltz took a pass from Erik Gustafsson at the top of the right circle and fired low. The puck snuck past Martin to tie things up at two heading into the locker room.

The teams went scoreless in the final period. In Gus Macker Time, Rampage captain Joe Whitney drove to the net and managed to get a puck through Hogs goalie Jake Hildebrand. The shot trickled across the goal line to end the evening for 1985 fans at the BMO Harris Bank Center.

Hildebrand, in his first start for the IceHogs, was solid, stopping 36 of 39 San Antonio shots. Schmaltz was noticeable all night in addition to the two goals and was awarded Third Star honors.

This was a wild one in Cedar Park. The IceHogs fell behind by three goals in the opening period but rallied to tie the game eight minutes into the second. From there, Stars rookie goalie Landon Bow entered the game for Texas and stopped 34 of 35 shots in the final 32 minutes.

Down 3-0 entering the second period, the Hogs quickly got back in the game. Cameron Schilling got things started with a power play goal from the top of the left circle 1:17 into the middle frame.

At the 6:06 mark, Luke Johnson converted in the slot past Texas starter Maxime Legace for his first professional goal. The play was set up by a sweet pass from Jeremy Langlois. Not long after Johnson’s tally, Robin Norell picked up his first career goal. All of a sudden, Rockford was back to even ground with the Stars.

Lamentably, it was not to last as Texas stormed back with two quick goals. The second, a Matt Mangene power play goal at 9:55 of the second period, marked the end of Jake Hildebrand’s evening in the crease. In came Mac Carruth, who allowed three more Stars to light the lamp.

In reality, there wasn’t much either Hogs goalie could have done to prevent a rout. Rockford served up enough tasty turnovers to start a bakery over at the faceoff dot. The IceHogs struggled to handle the pace set by Texas and the goalies were left out to dry as a result.

Rockford, who did out shoot the Stars 46-25 on its way to its eighth-straight loss, did get a third period goal from Kyle Baun to round out the Hogs scoring.

The Hogs got down and dirty with Texas, matching the Stars through regulation and overtime before dropping their ninth in a row in the shootout.

Gemel Smith struck quickly for the Stars, knocking a high pass attempt by Denis Gurianov into the net behind Hogs goalie Mac Carruth. The highlight-variety goal came just 2:38 into the game.

From the onset, Rockford played a physical style that slowed the pace of the game and kept the IceHogs within striking distance. Carruth was able to handle the occasional breakouts and keep his team in the game.

At the 4:52 mark of the second period, Rockford evened thigs up. Spencer Abbott took a pass from Cameron Schilling, worked his way into the left circle, and fired past Texas net-minder Landon Bow.

The score remained 1-1 as both Carruth and Bow turned away countless scoring chances for both teams. Both goalies were on their games and each played well enough to win. However, Bow stopped Abbott and Nick Schmaltz in the shootout. Brandon Ranford and Travis Morin found the net for the Stars, who came away with the third point.

Working For The Weekend 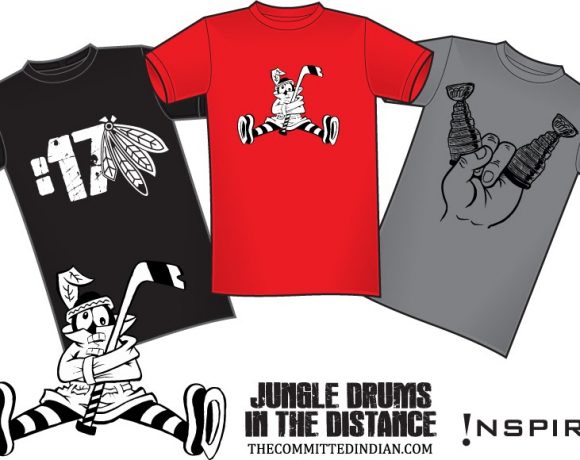 Committed Indian Stanley Cup T-Shirts – You Know You Want Them